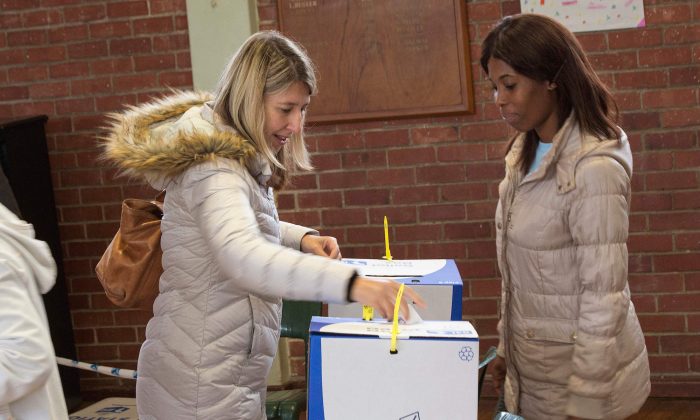 A woman casts her vote in Claremont, a middle-class suburb, during South Africa's national and provincial elections in Cape Town on May 8, 2019. (Rodger Bosch/AFP/Getty Images)
Africa

JOHANNESBURG—South Africa’s two major political parties, the African National Congress (ANC) and the Democratic Alliance (DA), bled votes to the left and right, respectively, after a May 8 election that many analysts had described as the most important since the country’s first multiracial vote in 1994.

President Cyril Ramaphosa’s ANC dropped below 60 percent for the first time, but at 57 percent put in a relatively strong showing, following Ramaphosa’s efforts over the past year to reform the government.

The Economic Freedom Fighters (EFF), whose leaders have encouraged land invasions and have been accused of inciting racial hatred, and whose protests have often exploded into violence, got almost 11 percent of the vote, up from the 6 percent it received in 2014.

The EFF’s election promise was to “truly emancipate” the nation of 58 million, by taking land and key parts of the economy away from white “settlers” to give to black South Africans, the majority of whom it says have been excluded by ANC black empowerment policies.

The white Afrikaner-dominated Freedom Front Plus (FF+), often described as right wing, came from nowhere to boost its support from less than 1 percent five years ago, to 3 percent. It’s now the country’s fifth-largest political organization. The FF+ has spoken out against the ruling party’s proposed legislation that would allow the government to expropriate land without compensating its owners.

Nine years of corruption scandals, economic stagnation, and state mismanagement under Ramaphosa’s predecessor, Jacob Zuma, dented the ANC, according to professor Adam Habib, a political scientist and vice-chancellor of the University of Witwatersrand.

The governing party captured more than 62 percent in 2014, but its latest losses will cut its majority in the national assembly by 19 seats.

“It’s clear that the ANC is in longer-term decline,” said Steven Friedman, director of South Africa’s Institute for the Study of Democracy.

The DA was the election’s big loser, with less than 21 percent support, significantly lower than the almost 27 percent it garnered at local government polls in 2016, a performance that it heralded as a sign that the party would soon replace the ANC.

Friedman said despite the DA’s record of good governance in the only province it administered, the Western Cape, it had failed to win the trust of the numbers of black voters it needed to challenge the ANC.

According to FF+ spokesman Phillip van Staden, DA also has lost a lot of votes to FF+ after the DA declared it supported affirmative action policies that favored blacks for jobs, and by suggesting that “white poverty doesn’t exist.”

Habib described added support for the EFF in particular as a “bad sign.”

The EFF has a “Central Command” and calls its members “revolutionary soldiers.” They wear uniforms of red berets and matching overalls, to show solidarity with the working poor.

The party’s leader, or “commander-in-chief,” is a charismatic 37-year-old, Julius Malema. Shortly before the polls, he escaped charges of hate speech brought against him after he’d made the following public utterance: “We are not calling for the slaughtering of white people—at least for now.”

Political commentator Melanie Verwoerd said the EFF inspired fear because its racist messages took South Africa back to a time when the country was on the brink of racial civil war.

The populist EFF says if ever given the chance to govern, it will seize all banks, mines, and land, and dole out the wealth to impoverished black South Africans.

Habib said while millions of South Africans were poor, they were not stupid, and were not fooled by the EFF’s “grand promises.”

He said the party was drawing its support elsewhere, specifically from black professionals who were deserting the ANC.

“The ones who’ve done best, because what they want is to be given their opportunity at the feeding trough. The ANC has hogged that, for a certain select few, and the EFF is promising access to the feeding trough for another layer of the professional classes.”

Habib said the EFF also increasingly is backed by young black people who feel excluded from the ruling party’s pledges of jobs and economic opportunities.

“They’re angry because they’ve been promised one thing by the ANC and got the direct opposite. They’ve been lied to.”

Verwoerd said the real danger of more growth of the EFF lay in a future South Africa that had failed to ensure livelihoods for millions of jobless youth.

“The only reason why I think at this stage they’re not doing even better is because many young people aren’t registering to vote. If the EFF can actually start mobilizing the youth, that could become a big problem for the ANC because our demographic bubble sits very much in the youth.”

Six million young citizens didn’t register to vote on May 8.

EFF spokesperson Veronica Mente said she had “no doubt” that her party would govern South Africa in the “not too distant” future.

Habib said the only way to prevent the further rise of radicals like the EFF was to significantly strengthen the economy, and decrease poverty.

Friedman agreed: “Unless we begin to do on the economic front as a society what we did on the political front 25 years ago, and that is to begin to negotiate changes in the economy which would open it up to more people, then a lot of the problems will persist.”