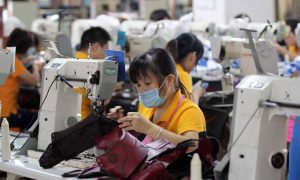 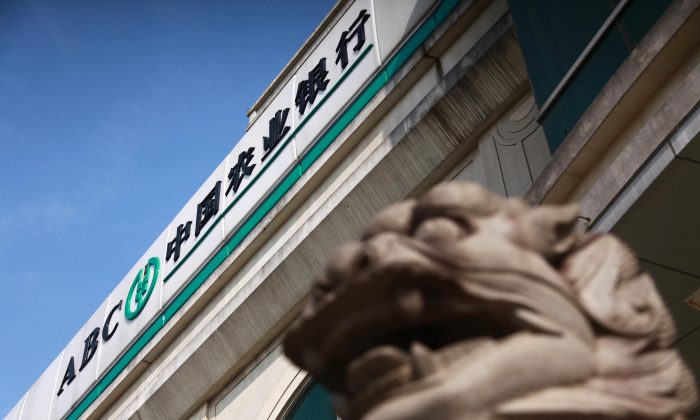 A most obvious symptom of China’s ailing manufacturing sector can be gleaned from studying its banks’ balance sheets.

China’s Big Four state banks provided much of the financing during the country’s manufacturing growth over the last two decades. But as China’s manufacturing and export sectors contract, so does its ability to service existing loans.

Last year China slogged through its worst economic growth in more than two decades, and as a result, bad loans piled up. The buildup of such nonperforming loans—loans that are in danger of defaulting and for which the interest is past due—increasingly weighs on its bank balance sheets.

CCB was last of the Big Four banks to announce earnings on March 27. CCB said it wrote off almost 36 billion yuan ($5.8 billion) in bad loans last year, more than double the amount it wrote off in 2013.

AgBank experienced the greatest uptick in year-over-year writeoffs among its peers, with its bad debt increasing threefold. And that doesn’t include the 26 billion yuan of soured loans it sold off to “asset management companies,” set up specifically by the Chinese Communist Party to buy up toxic assets and keep the banks’ balance sheets clean. AgBank got around 37 cents on every dollar of loan sold.

AgBank’s ratio of nonperforming loans to total assets at year-end was 1.54 percent, an alarming 20 percent increase from merely three months earlier. According to a research note by Barclays Plc, the deterioration of the loans at AgBank were driven by the manufacturing, wholesale, and retail sectors, which Barclays called “a major concern going forward.”

The deterioration of bank assets coincided with the smallest net income gain the state banks experienced in a decade. According to Bloomberg estimates, the average increase in net income for 2014 at China’s five biggest banks—Big Four along with Bank of Communications—was 6.7 percent, the smallest increase in more than a decade.

The near future looks even bleaker for China’s big banks.

The People’s Bank of China, China’s central bank, has cut interest rates twice since last November, which will compound the banks’ challenges. Lower interest rate will squeeze the bank’s net interest margin, or the interest spread between its loans and borrowings.

From 2013 to 2014, Bank of China increased its loan impairment reserves by 20 billion yuan to 189 billion yuan. This increase of 12 percent is far less than the increase in overall nonperforming loans of 42 percent, which means that the bank is giving itself a smaller cushion against loan losses today compared to a year ago.

The latest China Purchasing Managers Index survey released on March 24 showed a reading of 49.2, which resides squarely in the feared “contraction territory.” Such pessimism among manufacturers in China is another warning sign that bad loans likely won’t let up in the near future.

Shares in the Big Four banks rallied in the last six months along with the rest of the Chinese market. But recent economic headwinds suggest the future may be less forgiving.