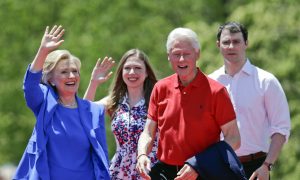 The official confirmed that the department had received a criminal referral from the inspectors general of the State Department, where Clinton served for four years, and of the federal intelligence agencies. Another U.S. official said it was unclear whether classified information was mishandled and that the referral didn’t necessarily suggest wrongdoing by Clinton herself.

The officials weren’t authorized to discuss the referral publicly and spoke only on condition of anonymity.

Clinton’s campaign said that she had “followed appropriate practices in dealing with classified materials.”

“Any released emails deemed classified by the administration have been done so after the fact, and not at the time they were transmitted,” campaign spokesman Nick Merrill said in a statement.

It was not immediately clear whether the Justice Department would investigate the matter, but the existence of the referral suggests that Clinton is likely to face lingering questions during the presidential campaign over her personal email account — an issue that has dogged her for months and that Republicans have used to criticize her.

Reince Priebus, chairman of the Republican National Committee, reiterated his call for Clinton to turn over her personal email server to an independent third party.

Clinton Reaches Out (and Out and Out!) for 2016 Policy Ideas

Facing questions in March, Clinton said that as secretary of state she had used a personal email account as a matter of convenience to limit the number of electronic devices she used. She maintained then that she had never sent classified information. Earlier this month, the State Department made public some 3,000 emails involving Clinton covering March through December 2009, and it is expected to make regular further releases of such correspondence.

The aim is for the department to unveil 55,000 pages of her emails by Jan. 29, 2016. But a federal judge this month chastised the State Department for moving too slowly in providing The Associated Press with thousands of emails submitted through the Freedom of Information Act.

The referral by the inspectors general was first reported by The New York Times.

The Justice Department receives many referrals that it decides not to take up, and decisions about what to pursue often take some time.