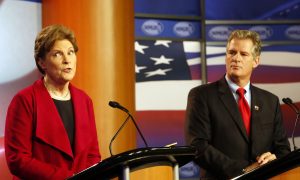 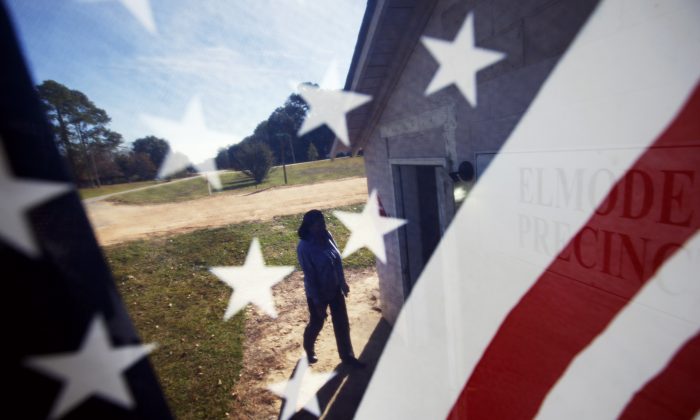 Woman is seen through an American flag as she walks into the Elmodel precinct to cast her ballot, Tuesday, Nov. 4, 2014, in Elmodel, Ga. (AP Photo/David Goldman)
Midterm Elections

It’s only fitting: Check in with voters at Our Mother of Sorrows church in Louisville, Kentucky, to get a sense of the sour mood rippling across the country this Election Day.

Seventy-four-year-old Jim Brinley, casting his ballot for Republicans, thinks an over-reaching government is “ruining us” and wants to “get back to government as it should be.”

Democrat Keisha Matlock, a 38-year-old college student, wonders aloud, “Why do we even vote?” as she casts her ballot for Democrats.

Yet there is hope mixed in with the voices of anger and cynicism.

Listen to Danielle Glover, 28, who voted in Commerce City, an industrial suburb northeast of Denver. She hopes Democrats can hold off a Republican takeover of the Senate. But whatever the results, she says, “I would hope that once we get past the election, that elected officials from both parties can sit down and work on policies together.”

Listen to construction worker Rebecca Cziryak, who was out at dawn Tuesday to vote the Republican line in New Jersey, predicting it could mean more job sites in her future.

“Believe it or not, when the Republicans are in full force, I work more,” says Cziryak, who voted at a community college in Gloucester Township, near Camden.

Listen to Kristi Johnson, a pharmacist who voted at a community college in Raleigh, N.C., also hoping Republicans retake the Senate.

Republicans, she says, could “help us iron out” problems with the president’s health care law and other matters.

As for President Barack Obama, who’s not on the ballot but still very much on the minds of many voters, Johnson says: “I’m just waiting for him to be gone.”

Indeed, many of those casting ballots in Tuesday’s midterm elections already were starting to turn their thoughts to the presidential race in 2016.

Reginald Valentine Sr., in New York City, said he “really, really, really” would like to see the country elect a female president. That would be Hillary Rodham Clinton.

But plumber Steve Rhodes, exhausted by all the political ads in North Carolina this year, isn’t ready to go there — 2016 — just yet.

“I’ve had enough of the commercials and everything,” he said.

Those turning out to vote on Tuesday weren’t the only ones having their say this election. More than 18 million Americans in 32 states voted early — either by mail or at early polling places.

This year’s early voters included Michael Laughlin, a self-described radical moderate in Denver, where the psychotherapist held out hope that Democrats will be able to keep control of the Senate and fretted about whether ordinary people are being heard anymore.

“My biggest hope is that we don’t do more damage than we’ve already done,” Laughlin said. “A Republican Senate could turn back the hands of time in a number of different areas,” including civil rights and the economy.

Overall, Laughlin said, “our country has gotten caught up in a system where the majority is counted not in people but in dollars.”

Millions more voters had their say in another way — by sitting this election out. Roughly 61 percent of the nation’s 223 million eligible voters were expected to stay home, said Curtis Gans, director of the Center for the Study of the American Electorate.

In Florida, equipment glitches at a polling place in Pensacola caused some would-be voters to bail out without casting ballots.

“I had a 7:45 meeting so I couldn’t wait any longer,” said Mark Hobbly, who had planned to vote for Democrat Charlie Crist for governor.

Skepticism about whether the elections would improve things was a recurring theme around the country.

Back in New Jersey’s Gloucester Township, Democrat Mark Madden said adding more Republicans to the mix in Congress would only add to the gridlock in Washington.

“If the Republicans are put in there, you might as well tell the president, ‘just go home,’ ” said Madden.

Antill spoke to the disillusionment felt by many nationwide.

“I’m a cab driver and you’d be surprised at all the races of people who get in and say they are fed up,” he said. “This country is in trouble.”

Party officials on both sides said there were few signs of widespread problems in the first hours of voting. In Hartford, Connecticut, voting was delayed at several polling places that did not receive voting lists in time for the 6 a.m. opening. Gov. Daniel P. Molloy, who is running for re-election, was among those forced to wait. Molloy’s campaign later sought a Superior Court order to extend voting hours past the 8 p.m. closing at polls that were affected by the delays.