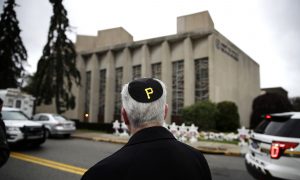 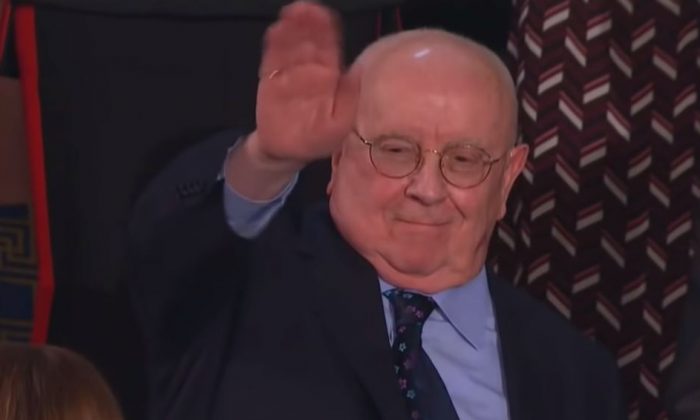 Judah Samet waving to everyone at Congress during the State of the Union on Feb. 6, 2019. (Screenshot/CNN)
Trump Administration

The audience at President Donald Trump’s State of the Union address Tuesday sang “Happy Birthday” to one of the president’s guests, who survived both the Holocaust and the October shooting at a Pittsburgh synagogue.

“Just months ago, 11 Jewish-Americans were viciously murdered in an antisemitic attack on the Tree of Life Synagogue in Pittsburgh. SWAT Officer Timothy Matson raced into the gunfire and was shot seven times chasing down the killer and he was very successful,” Trump stated. “Timothy has just had his 12th surgery and he’s going in for many more — but he made the trip to be here with us tonight. Officer Matson, please.”

Matson was met with a standing ovation from the chamber.

“Just months ago, 11 Jewish-Americans were viciously murdered in an anti-Semitic attack on the Tree of Life Synagogue in…

He continued, “Thank you, we are forever grateful, thank you very much.” (RELATED: Watch Buzz Aldrin Stand And Salute Trump In The Middle Of A Huge Standing Ovation)

“Tonight, we are also joined by Pittsburgh survivor Judah Samet. He arrived at the synagogue as the massacre began. But not only did Judah narrowly escape death last fall. More than seven decades ago, he narrowly survived the Nazi concentration camps. Today is Judah’s 81st birthday,” the president added.

Judah Samet is a #Holocaust survivor from the Bergen-Belsen death camp. He arrived 5 minutes late to services at Tree…

The crowd then sang “Happy Birthday” to him.

“They wouldn’t do that for me, Judah,” the president quipped.

On Oct. 27, Robert Bowers allegedly opened fire inside the Tree of Life Synagogue, killing 11 people. Bowers had anti-Semitic posts all over his social media accounts, and was allegedly armed with two pistols and an AK-47.

UPDATE: 46-year-old Robert Bowers, the suspect in the Pittsburgh synagogue shooting has been charged.Bowers reportedly yelled "All Jews must die" as he fired at random>>https://buff.ly/2zhcuv1