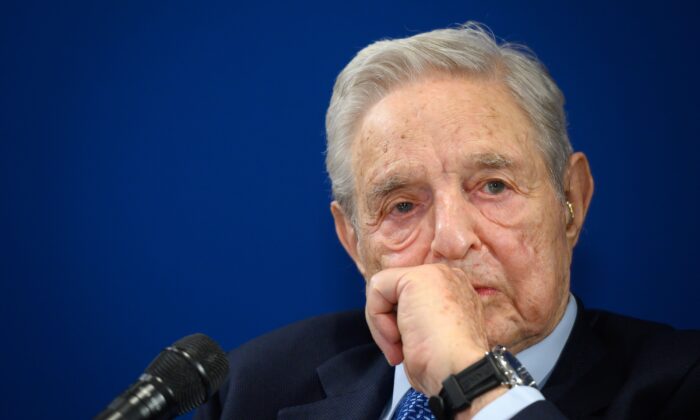 Hungarian-American financier and philanthropist George Soros looks on during a meeting in Davos, Switzerland, on Jan. 23, 2020. (Fabrice Coffrini/AFP via Getty Images
US

Billionaire George Soros, a megadonor to liberal causes, spent at least $40 million in support of progressive prosecutor candidates between 2014 and 2021, according to a preliminary report published by Virginia-based Law Enforcement Legal Defense Fund (LELDF).

Progressive prosecutors advocate for criminal justice changes that will cut the population behind bars and direct resources to treatment and rehabilitation programs; they often support putting more effort into investigating and prosecuting law enforcement misconduct.

In recent years, Soros has emerged as the most visible financier of the progressive prosecutor movement in the country, donating to nonprofits that mobilize grassroots support, spending big to elect progressive prosecutors, and supporting professional organizations that guide policymaking, according to the report.

Between 2018 and 2021, Soros and Soros-backed entities spent nearly $20 million in support of 40 progressive prosecutor candidates across the nation, according to the report, which is based on multiple sources that include media articles, state and local campaign finance databases, IRS forms, and organizational statements or annual reports.

The report doesn’t list all 40 progressive prosecutors and the amount of Soros’s money that was spent on each.

LELDF Policy Director Sean Kennedy told The Epoch Times that a full report would be published at a future date. LELDF is a nonprofit dedicated to supporting and defending the law enforcement profession. The organization also seeks to educate the public about risks and threats to the profession, according to its website.

An entity is considered Soros-backed if the billionaire was its sole source or primary donor, or if Soros’s donations to that entity in relevant election cycles exceeded the amount spent on candidates, according to the report.

A common strategy is to set up state super PACs, which often bear the name Justice and Public Safety, to steer sizable spending in support of progressive candidates and to counter their opponents.

Many Soros-backed prosecutors face public outcry at the spiraling crime rates under their helm.

In Los Angeles, Gascón is mired in a robust recall campaign. As of last week, the campaign had successfully collected 567,857 signatures—the legal amount required to get the recall on the ballot; the campaign is still gathering signatures over concern that some might be ruled invalid by election officials.

Last week, three Republican Pennsylvania lawmakers began an effort to impeach Krasner as violent crime skyrockets in Philadelphia. They are in the process of reaching out to crime victims and drafting Articles of Impeachment to be introduced in the state Legislature, according to statements.

Between 2014 and 2018, Soros and Soros-backed entities spent $19.3 million in local prosecutor races, according to a Los Angeles Times and Marshall Project investigation cited by the report.

In 2014, the Soros-founded Open Society Foundations donated $50 million to American Civil Liberties Union in support of its nationwide campaign to drive down the jail and prison population, according to a statement.

The vast Soros-linked social justice network includes the Brennan Center for Justice, Fair and Just Prosecution, and the Vera Institute of Justice, according to the report.

In 2018, Fair and Just Prosecution, Brennan Center for Justice, and Justice Collaborative developed a framework titled “21 principles for the 21st-century prosecutor,” with recommendations that include moving toward ending cash bail, minimizing misdemeanor prosecutions, and ending the prosecution of juvenile offenders as adults.

Representatives for the Open Society Foundations and Soros didn’t respond by press time to a request by The Epoch Times for comment.