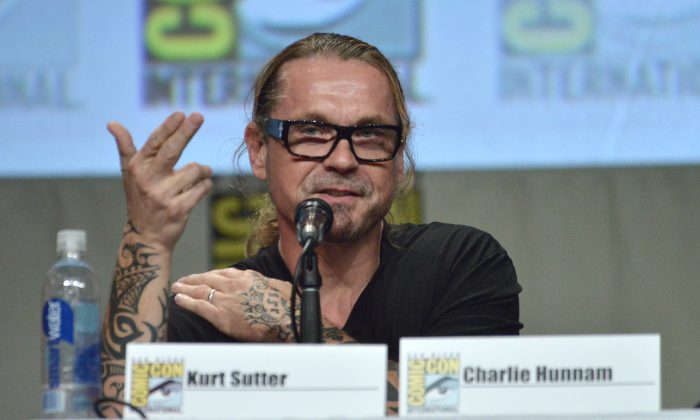 Sons of Anarchy won’t get made into a movie. A hoax article saying that creator Kurt Sutter will launch a film with Charlie Hunnam and Brad Pitt has gone viral. Writer Kurt Sutter attends the "Sons of Anarchy" panel on Day 4 of Comic-Con International on Sunday, July 27, 2014, in San Diego. (Richard Shotwell/Invision/AP)
Entertainment

Sons of Anarchy season 7 is getting closer to starting, while Kurt Sutter and his team continue to work on finishing the final season of the FX show.

“As I’m finishing my draft of 707, I keep hearing my mom’s voice…’It’s all fun and games until someone gets their head crushed by a car,'” he said.

Sutter previously said in one of his YouTube updates that episode 7 is usually big.

“It’s sort of, it ends up being a, the same way a premiere sets in motion the bigger elements of the season, episode 7 tends to bring some of those things to some sort of conclusion then sets up what will ultimately be some of the bigger story elements that will bring us into the end of the season,” he said.

Sutter also previously responded to whether there will be “Red-Wedding” type violence in the season.

The “Red Wedding” took place in Season 3 of “Game of Thrones” when several major characters were killed off in the same scene.

“On a scale of 1 to Red Wedding, what are we in for here?” the Twitter user asked Sutter.

Many fans and even the cast members don’t expect many of the primary characters to stay alive through the end of the show.

Sutter also took to Twitter to defend the casting of Lea Michele, best known for her role in Glee.

“Look beyond the song and dance, the kid has chops,” he said.