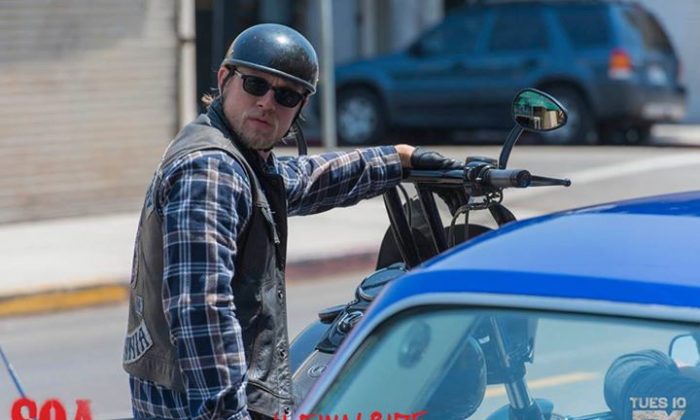 Sons of Anarchy season 7 is on a short break and episode 12, the episode before the series finale, will not air on November 25.

The episode has been pushed back until Tuesday, December 2.

Titled “Red Rose,” the episode will see Jax “make the ultimate decision” as tensions mount and truths are finally revealed, according to the official description.

Episode 13, or the series finale, will air on Tuesday, December 9. A description for the episode isn’t out yet.

One photo has emerged so far for Red Rose, showing Jax meeting with Unser.

Also, Kurt Sutter told Entertainment Weekly that two SAMCRO members would die this season, meaning one will die in one of the final episodes. Juice is on the top of the list but there’s other possibilities, too, such as Happy.

And Jimmy Smits (Nero) teased his character’s role in the final episodes.

“Don’t get too happy. What did Nero do in Rome? He watched it all burn, right? The hand of the reaper, Kim. All-powerful,” he told Yahoo.

He also described the finale as “heavy-duty.”

That follows Katey Sagal saying that the ending “will not disappoint” and at another time calling it “satisfying.”

Sutter also spoke previously about how much time he considered the final frame and revealed what he used as inspiration.