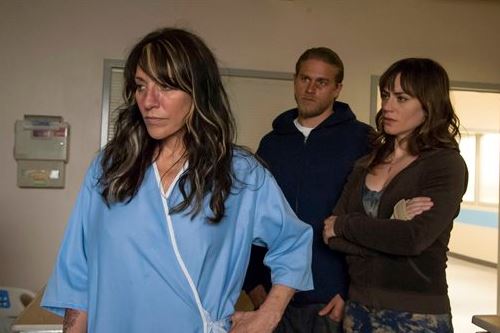 Katey Sagal (Gemma) in a previous season of Sons of Anarchy. (FX)
Entertainment

A new photo gives the first look of Gemma in Sons of Anarchy season 7.

The link leads to a blog post that includes Sagal on set.

Filming started earlier this month, with show creator Kurt Sutter finishing work on episodes one through three and starting on four through seven.

He said recently that four “just gets darker” while seven will be a big turning point for the final season of the popular FX show.

Charlie Hunnam has been filming as well, being pictured on set dressed in an orange jumpsuit with “SJCCF” emblazoned on the leg. That stands for San Joaquin County Correctional Facility.

The show just started filming for the final season, so Jax may end up in prison early on in it.

The casting of Marilyn Manson as Ron Tully, a prison shot-caller, fits into this scenario.

The FX announcement said that Tully is used by Jax to expand his power base.

Season 7 is slated to premiere sometime in September 2014.