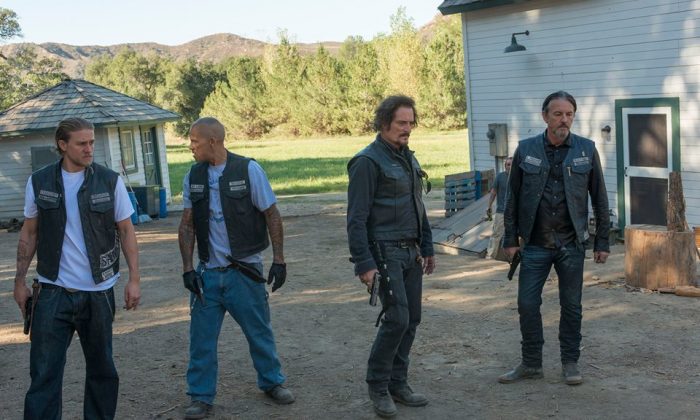 Sons of Anarchy won’t get made into a movie. A hoax article saying that creator Kurt Sutter will launch a film with Charlie Hunnam and Brad Pitt has gone viral. (FX)
Life & Tradition

Sons of Anarchy won’t get made into a movie. A hoax article saying that creator Kurt Sutter will launch a film with Charlie Hunnam and Brad Pitt has gone viral.

The bogus piece was published on Empire News, a satirical news website.

Here’s the disclaimer for the site: “Empire News is a satirical and entertainment website. We only use invented names in all our stories, except in cases when public figures are being satirized. Any other use of real names is accidental and coincidental.”

A number of people apparently believed the fake article.

“And Brad Pitt is a bad choice to play John Teller anyway , I’d Choose Sam Elliot,” one person wrote in the comments section.

Added another: “Hope this is fake. Not sure I like Brad Pitt as John Teller. I don’t want to look at the screen and feel it’s another Hollywood movie. Should get lost in the story just like on TV and may not happen when seeing Brad Pitt. Should get a little known actor for the role to create the character rather than buy one.”

Here’s what the original article said:

Kurt Sutter, creator of the hit FX drama Sons of Anarchy, has announced plans to turn the popular television series into a major motion picture.

Sutter, who was also a writer, producer, and director on the series, said in an interview with Hollywood Today magazine that he has long contemplated taking S.O.A. to the big screen following its run on television. “People absolutely loved the show, as did I, and I have put a lot of thought into the matter, and we are going forward with turning it into a feature film” Sutter said.

Sons of Anarchy ran for seven seasons on FX, from 2008-2014, and in the process built a huge following. Sutter said the film will star Charlie Hunnam, who played the lead character Jax Teller, as well as Ryan Hurst who played Opie Winston, and Katey Sagal as Gemma Teller. The film, which is a prequel to the storyline of Sons will also introduce fans to Jax’s father, John, who will be played by Brad Pitt.