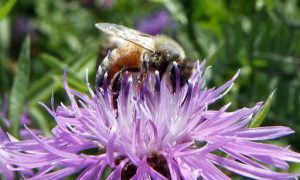 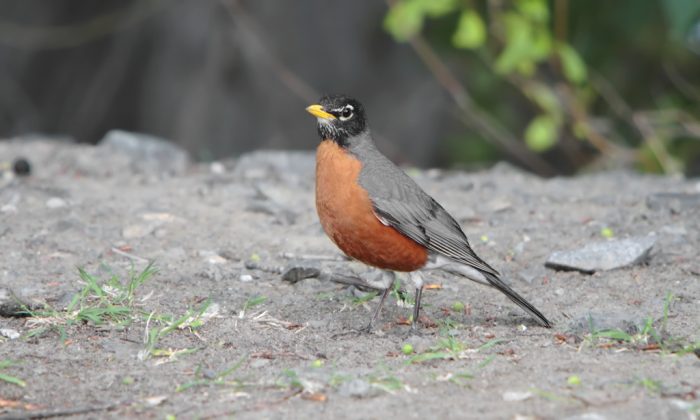 Jim Hall was mowing the town’s baseball diamond when he felt a little bump underneath him. “And there it was, a dead robin,” he said.

Just last week, he found another one. “Something is going on here,” said Hall, who has lived in this mid-Michigan town of 7,000 for 50 years.

Two dead birds may not seem like much. But for this town, it’s a worrisome legacy left behind by a chemical plant-turned-Superfund site.

After residents complained for years about dead birds in their yards, 22 American robins, six European starlings and one bluebird were collected for testing.

The results, revealed last week: The neighborhood’s songbirds are being poisoned by DDT, a pesticide that was banned in the United States more than 40 years ago. Lethal concentrations were found in the birds’ brains, as well as in the worms they eat.

DDT poisoning of birds is extremely rare, although traces of the persistent pesticide remain in people and wildlife worldwide.

“I’ve never seen anything like it. When people told me about it I didn’t believe it. And then we ran these tests. These are some of the highest-ever recorded levels in wild birds,” said Matt Zwiernik, a Michigan State University assistant professor of environmental toxicology who led the testing.

The birds’ brains contained concentrations of DDE, a breakdown product of DDT, from 155 to 1,043 parts per million, with an average of 552. “Thirty in the brain is the threshold for acute death,” Zwiernik said. “All the birds exceeded that by at least two- or three-fold, and many by much more than that.” Twelve of the 29 birds had brain lesions or liver abnormalities.

The culprit is a toxic mess left behind by Velsicol Chemical Corp., formerly Michigan Chemical, which manufactured pesticides until 1963, a year after Rachel Carson’s book Silent Spring exposed the hazards of DDT, especially for birds. Populations of bald eagles and other birds crashed when DDT thinned their eggs, killing their embryos. The pesticide, known for accumulating in food webs and persisting for decades in soil and river sediment, was banned in the United States in 1972.

“I’ve never seen anything like it. When people told me about it I didn’t believe it. These are some of the highest-ever recorded levels in wild birds.”–Matt Zwiernik, Michigan State UniversityThe nine-block neighborhood has become a real-life example of Carson’s “Fable for Tomorrow” in Silent Spring. “It was a spring without voices. On the mornings that had once throbbed with the dawn chorus of robins, catbirds, doves, jays, wrens, and scores of other bird voices there was now no sound; only silence lay over the fields and woods and marsh,” Carson wrote.

Velsicol is infamous for one of the worst chemical disasters in U.S. history: In 1973 a flame retardant compound they manufactured – polybrominated biphenyls, or PBBs – was mixed up with a cattle feed supplement, which led to widespread contamination in Michigan. Thousands of cattle and other livestock were poisoned, about 500 farms were quarantined and people across Michigan were exposed to a chemical linked to cancer, reproduction problems and endocrine disruption.

The U.S. Environmental Protection Agency took control of the site in 1982 and the plant was demolished in the mid-1990s, leaving behind three Superfund sites in the 3.5-square mile town.

EPA officials did not respond to repeated requests for comment on the poisoned birds and the Superfund cleanup.

Of most concern is the 54-acre site that once contained Velsicol’s main plant, which backs up to the neighborhood where residents have found dead birds on their lawns.

“When he [Zwiernik] tells people about what we have going on here, people say ‘Really? That’s a 1960s problem,’ ” said Ed Lorenz, a professor at nearby Alma College and vice chair of the Pine River Superfund Citizen Task Force, which represents the community. Hall is the chair of the task force.

While there is a long-term health study for residents who had been exposed to PBBs, no one is monitoring their exposure to DDT or looking for possible human health effects. Elsewhere, traces of the pesticide have been linked in some human studies to reproductive problems, including reduced fertility and altered sperm counts.

“There’s definitely concern about the plant, the plant site, health and the environment,” said St. Louis City Manager Robert McConkie. “But we’ve learned to live with it.”

The town’s median household income is 43 percent lower than the state’s. About 22 percent of its families live below the poverty line.

The birds apparently have been poisoned by eating worms living in contaminated soil near the old chemical plant. No studies have been conducted to see whether the DDT has contaminated any vegetables or fruits grown in yards.

“There is definitely concern about the plant, the plant site, health and the environment. But we’ve learned to live with it.” –Robert McConkie, St. Louis City ManagerJane Keon, secretary of the task force, said the Michigan Department of Environmental Quality ignored their complaints about dead birds for years.

But Dan Rockafellow, the state agency’s project manager for the site, said it took time to collect enough bird samples to test.

“People would tell us they found dead birds all the time, but birds disappear quickly. Cats, raccoons, other animals get to them,” Rockafellow said. “They weren’t just lying around everywhere.”

Keon said that for two decades the EPA stayed only on the plant site, “as if the chain link fence would hold in the chemicals or something.”

EPA contractors now are cleaning up 59 yards. (One homeowner refused the cleanup.) Next year the agency plans on adding another 37 yards outside of the nine-block area.

“Our first priority was water and the second priority is now getting the lawns cleaned up.”-Dan Rockafellow, Michigan Department of Environmental QualityMost of the contamination is in the top six inches of the soil, probably from the chemicals drifting over from the plant, Rockafellow said. However, some yards have DDT and PBBs deeper in the soil, which could be due to Velsicol’s offer of free fill dirt to their neighbors decades ago.

The cleanup is driven by ecological risk, not risk to the homeowners, Rockafellow said. “This is because of the dead robins.”

When asked why it took so long to address the contaminated yards, Rockafellow said it came down to “knowing where the chemicals were. Once we did we fenced those areas off.” Those areas were cleaned up in the fall of 2012, he said, and that spurred “aggressive sampling in the neighborhood.”

Now the neighborhood is buzzing with trucks and workers. Clad in construction helmets and orange vests, workers contracted by the EPA tear up yards, remove dirt, fill it back in and lay new sod.

It isn’t the first time St. Louis wildlife has been contaminated. The Pine River’s contaminated sediment has resulted in a no-consumption advisory for all species of its fish. From 1998 to 2006, most of the Superfund site’s cleanup money – about $100 million – went toward cleaning up the river. After polluted mud was dredged up, preliminary testing has shown that DDT levels are declining in bass and carp downstream of the site, Rockafellow said.

However, DDT and PBBs remain in the river’s sediment and soil, he said. In addition, traces of a chemical that is a byproduct of DDT manufacturing, pCBSA, have been found in the city’s water system, so new water mains will tap into a nearby town’s water supply.

“Our first priority was water and the second priority is now getting the lawns cleaned up,” Rockafellow said.

The bird testing by the Michigan State researcher was largely unfunded, except for a small amount from the community task force. Zwiernik said the EPA and state need to determine if the cleanup actually stops birds from dropping dead.

“They have to have some kind of future monitoring program to test the remediation effort’s success. We’ve had a difficult time to get regulators to listen to that,” he said.

While birds in the rest of the region aren’t at risk, “the robins’ population in the nine-block area is decimated year over year,” he said.

Residents of the neighborhood go about their business of watering flowers and walking their dogs. “It’s sad because a lot of people here are losing some beautiful trees,” Keon said. She pointed to a large Victorian home with new, patchy sod. “The owner of that home said this was going to be his retirement home,” Keon said.

For Hall, leaving St. Louis is not an option. Pollution or not, this is home.

“It’s a nice place to raise your family, great community, people love and take care of each other,” Hall said. “If I ran away, I’d be running away from my responsibility to leave this place better for the next generation.”

This article was originally written and posted by Brian Bienkowski, a contributing writer for Environmental Health News.org. For the original article and more information, please click HERE.