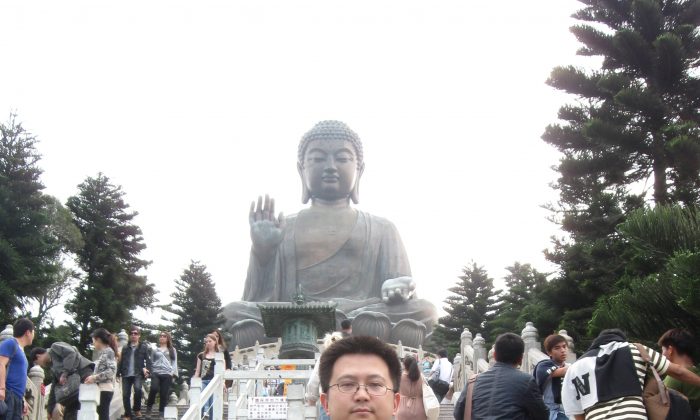 Yu Erwin Xiao and his mother, Yu Yeyi, on a trip to Hong Kong. (Courtesy of Yu Erwin Xiao)
China

Tall, serious, and polite, “Erwin” Yu Xiao met me in Atlanta to talk about his mother. She is a good person, not a criminal, he said, but she is being held in a detention center in the giant southwestern Chinese city of Chongqing.

Xiao’s mother is in poor health, and his elderly father is alone. “I am worried about my mother and my father,” Xiao said.

Mrs. Yu Yeyi has been illegally detained for practicing Falun Gong (also known as Falun Dafa), and for trying to tell other Chinese citizens the facts about it and how it has been persecuted in China.

According to the Falun Dafa Information Center, “Falun Gong is a traditional Chinese spiritual discipline that is Buddhist in nature. It consists of moral teachings for daily life, a meditation, and four gentle exercises.” The communist regime has been persecuting it since 1999.

This year’s detention is the latest of several episodes of illegal persecution his kind-hearted, humble mother has experienced, said Xiao. She was first detained in 2001 when she went to Beijing to protest the persecution of Falun Gong.  She was tortured by force-feeding, and injured.

Since being thrown in jail this time, her health deteriorated, Xiao said. She has developed Parkinson’s symptoms, cardiac symptoms, and dangerously high blood pressure, and has been transferred to the jail hospital. Xiao wants her to be released unconditionally.

On June 22, 2014, Mrs. Yu offered free DVDs about Shen Yun Performing Arts to a DVD shop owner in Chongqing. Shen Yun is a world-class dance and music company. It performs classical Chinese dance and folk dance, with an orchestra that combines Eastern and Western instruments. Shen Yun’s mission is to revive China’s glorious, 5,000-year old civilization, but the Chinese regime has banned it in China.

Many of its artists practice Falun Dafa, according to its website. The Communist Party “in systematic campaigns like the Cultural Revolution, has uprooted traditional beliefs and destroyed ancient treasures−bringing traditional 5,000 years of civilization to the brink of extinction,” according to the Shen Yun website.

The shop owner reported 70-year-old Mrs. Yu to the police, according to her son. “The police came. They put her in jail.” They threatened to block his 85-year old father’s pension. Both of his parents were detained and subjected to brainwashing.

She wants to help Chinese people understand the truth.

The elder Xiao, a retired college professor, is alone. His son is concerned about his father’s well-being. “My father, he is a very brave person. He finished his education before the communists came,” said Xiao. But he is uneasy about him being alone while his mother is imprisoned.

Mrs. Yu was released in August 2014. The case was not over. She had not yet been sentenced.

She had a chance to speak in court in January 2015.

Xiao said he was touched, because “all the Chongqing Falun Gong believers came to court seeking justice, risking their own safety” to support his mother.

“In court she announced that ‘Falun Gong is good,'” said Xiao. She told people in the courtroom that she shared the beauty of Shen Yun in order to help people see that Falun Gong is good for China. She said she had a constitutional right to do it. Shen Yun regularly includes in its programs acts that portray the goodness of Falun Gong and retribution visited on those who persecute it.

At first it seemed as if she would stay free.

The family had hired Li Xiongbing, who said he was a human rights lawyer. But once in court, he spoke inaudibly. No one could hear a word. “His behavior was very strange,” said Xiao, who thinks he was an undercover policeman. Li asked Xiao’s father for a lot of money to get the court document that showed Mrs. Yu’s sentence, but never delivered it. “This guy is very bad,” said Xiao.

At the end of June local police called Mrs. Yu at home, and asked her to come to the police station. They did not say why.

When she arrived, they took her to jail. None of the family has seen her sentence in writing, according to Xiao.

When he first moved to America, Xiao lived in Michigan. He told government officials there about his mother’s plight. Now he plans to tell his elected officials in Georgia. “It seems nobody tells the United States the truth about China,” said Xiao.

“Even in the U.S., a lot of Chinese people still favor China. I think they are living an untrue life.”

As we left the library where we met, it was raining gently. I tried to hold my umbrella over him. Xiao said he was happy to feel the rain. In China, he just worked or studied, and rarely had time to experience nature, he said. He looked around and almost smiled. “Two things I love about America—my favorites—public libraries and churches,” he said.

Even when my aunt called the mobile phone number of my father, she found in the beginning she could hear my father talking but after a while she heard some  interference and couldn’t hear my father any more.”

According to Xiao, Zheng Hengyi is probably responsible for cutting off his father’s phones. “Zheng is the head for monitoring and controlling of all telecommunications like phone, network in Chongqing University,” wrote Xiao.

Mrs. Yu was released on December 4.  According to her son, she refused to confess to any crime or to plead guilty.  She wrote a letter to her judge saying what she did was meant to help people, and was not wrong. “Last night I asked her to read the announcement from the court. They still sentenced her guilty and said my mother plead guilty but she actually didn’t. As you can see in China these Communists treat law as children play,” wrote Xiao in a letter to his congressman.