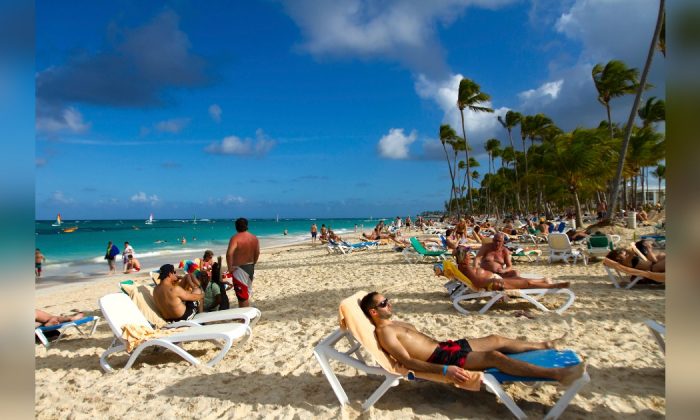 Tourists at a beach in Punta Cana, Dominican Republic in a file photo. (Erika Santelices/AFP/Getty Images)
US News

Son of Woman Who Died in the Dominican Republic Says He Was Pressured to Cremate, Embalm Body

The son of an American tourist who died while on vacation in the Dominican Republic claims authorities in that country are stonewalling his attempts to seek answers about his mother’s death.

William Cox, 25, said along with refusing to perform toxicology tests, they are also pressuring him to cremate or embalm his mother’s body before its return to the United States.

Leyla Cox of New York, traveled to the Punta Cana resort, Excellence resort, on a solo trip to celebrate her 53rd birthday. She was supposed to return home on June 12 but suddenly died in her hotel room on June 10, a day after her birthday.

Dominican authorities have listed her cause of death as a heart attack but have not released any further details surrounding the circumstances of her death, reported Fox News.

The 25-year-old told Fox news that Dominican authorities have stonewalled him while he pressed them for toxicology tests and information about his mother’s death. He said U.S. Embassy officials in Santo Domingo are talking to the authorities on his behalf and are relaying information to him on a daily basis.

“They put me against a wall,” William said during the interview. “The Dominicans said that I had to sign papers giving them permission to take her to a funeral home, and if I didn’t do that in four hours, they were going to consider her a ‘Jane Doe.’ They said I had to give them permission to cremate her or embalm her, or I would never get my mother back.”

William said authorities have resisted performing toxicology tests because they say their machines are broken.

“The U.S. Embassy communicated that to me and said that they don’t know when the machines will be fixed,” the 25-year-old said.

“I just feel like the Dominicans are covering their own tracks by getting rid of the evidence and evidence is my own mother. I never thought another country would do this to me.”

William’s mother is among the 11 known Americans to have died in the Carribean nation since June 2018 under suspicious circumstances. Previous reports indicate that most of the tourists who have died were of good health and their ages ranged between 41 and 67.

A number of the other recent deaths and severe illnesses occurred after the tourists had drunk something from the mini fridge in the hotel room. Authorities have listed heart attacks as a cause of death for several of the recent deaths.

Tom Inglesby, director of the Johns Hopkins Center for Health Security, told The New York Times that the symptoms described in reports, which include vomiting blood and bleeding, prior to the deaths are consistent with poisoning.

“It’s rare for travelers to die of unknown causes like this, and to have a high number of them in a relatively short period of time is alarming, shocking, sad,” Dr. Inglesby said. “It’s something that investigators should be able to get to the bottom of.”

He said without a toxicology report, however, it is difficult to establish exactly how they died.

“I have a right to be suspicious,” William previously told Staten Island Advance.

He said he does not know whether his mother had a drink from the minibar or in another part of the resort, reported Fox News.

William said he had asked whether Dominican authorities were able to give him a tube of his mother’s blood along with her ashes so that his family could get her blood tested in the United States. But he said he was refused.

“It’s been very hard for me emotionally,” William told the news broadcaster. “What the Dominican Republic is making me do is help them cover up their own mistakes. I believe if my mother had not been in the Dominican Republic, or even if she had been anywhere else in the world, she would still be alive today.”

“These are situations that can occur in any country, in any hotel in the world,” García told the newspaper. “It’s regrettable but sometimes it happens.”

The U.S. Embassy said in a statement on June 11 that the FBI is helping with toxicology analysis on the recent cases, at the request of the Dominican Republic. The results could take up to 30 days.

Simon Veasey contributed to this report.