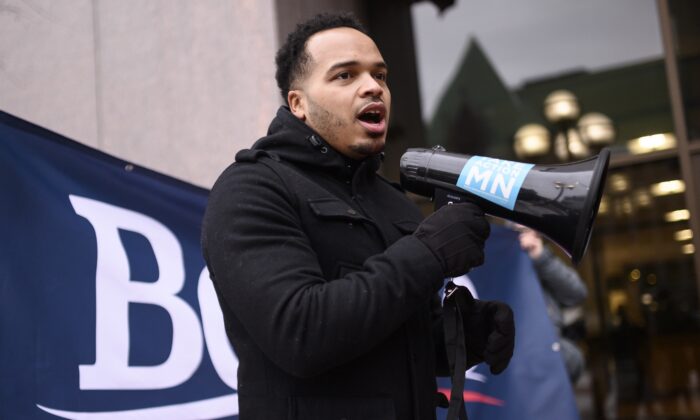 The son of Minnesota’s top law enforcement official came out in support of Antifa, the far-left group that President Donald Trump plans to designate as a terrorist organization.

Jeremiah Ellison, a Democratic member of the Minneapolis City Council, responded to Trump’s announcement over the weekend, writing in a social media statement: “I hereby declare, officially, my support for ANTIFA.”

Photographs and video footage show rioters destroying buildings, setting fires, and violently beating down individuals they disagree with in cities across the United States in recent days. Some of them wear clothing and accessories with anarchist symbols on them.

Ellison added: “Unless someone can prove to me ANTIFA is behind the burning of black and immigrant owned businesses in my ward, I’ll keep focusing on stopping the white power terrorist THE ARE [sic] ACTUALLY ATTACKING US!”

Asked about his son’s endorsement of Antifa, Minnesota Attorney General Keith Ellison said during an appearance on CNN on Monday: “That was a comment about the absurdity of the President’s comment more than anything else.”

“We don’t see what the president is talking about,” Ellison said.

He was not asked about his own promotion of the group.

Ellison, elected to the attorney general post two years ago after serving as a U.S. representative for four terms, in 2018 posted a photograph of himself holding “Antifa: The Anti-Fascist Handbook.”

The book will “strike fear in the heart of” Trump, Ellison alleged. He recently deleted the photograph and accompanying statement.

Ellison took over the prosecution of Derek Chauvin, the Minneapolis police officer who was captured on video kneeling on the neck of George Floyd, a black man arrested for alleged forgery. Chauvin was fired before being arrested and charged with third-degree murder and second-degree manslaughter.

Ellison told reporters Sunday that Floyd was killed “at the hands of” Chauvin. A preliminary autopsy said that Floyd didn’t die from traumatic asphyxia or strangulation. Floyd’s family wants an independent autopsy, with a release planned this week.

Floyd’s death came from the “combined effect of Floyd being restrained by the police, his underlying health conditions, and any potential intoxicants in his system likely contributed to his death,” the preliminary findings showed, according to the criminal complaint against Chauvin.

Ellison said the case “is unusual” because of the way Floyd died, adding: “Prosecuting police officers for misconduct, including homicide and murder, is very difficult. And if you look at the cases that have been in front of the public in the last many years, it’s easy to see that is true. Every single link in the prosecutorial chain will come under attack as we present this case to a jury or a fact-finder.”

Antifa members “argue that fighting back is always self-defense, even if they strike the first blow,” Bray told the Truthout website. They refuse to believe that certain people and groups can organize without it resulting in physical violence, he continued, adding, “Rather than waiting for fascists to show up at an immigrant’s door with baseball bats and knives, they commit themselves to shutting down far-right organizing by any means necessary.”

Reporters, Democrats, and a host of others who aren’t part of the far-right have been on the receiving end of violence from Antifa.

Trump, a Republican, said Sunday his administration would designate Antifa as a terrorist group as looting and riots erupted in cities across the nation alongside protests spurred by Floyd’s treatment.

Federal, state, and local officials have blamed various groups for the violence, including white supremacists and far-left extremists.

Several analysts told the Associated Press they saw pictures of members of the Proud Boys, a group described by some as far-right, and individuals linked to a loosely organized movement known as “Boogaloo” at various protests.

“We are now confronting white supremacists, members of organized crime, out of state instigators, and possibly even foreign actors to destroy and destabilize our city and our region,” Minneapolis Mayor Jacob Frey, a Democrat, said in a statement over the weekend.

St. Paul Mayor Melvin Carter claimed every single person arrested was from out of state but admitted over the weekend that what he said wasn’t true and arrest records from Minneapolis showed about 86 percent of 36 recent arrests listed addresses in Minneapolis or the metropolitan area.

People who are arrested and part of the groups won’t identify themselves as members of the groups, Minnesota Corrections Commissioner Paul Schnell told reporters early June 1. “We do know that people that have strong affiliations with a variety of these groups are out and about in our community, and maybe some of the people that we continue to pursue throughout Minneapolis,” he said.