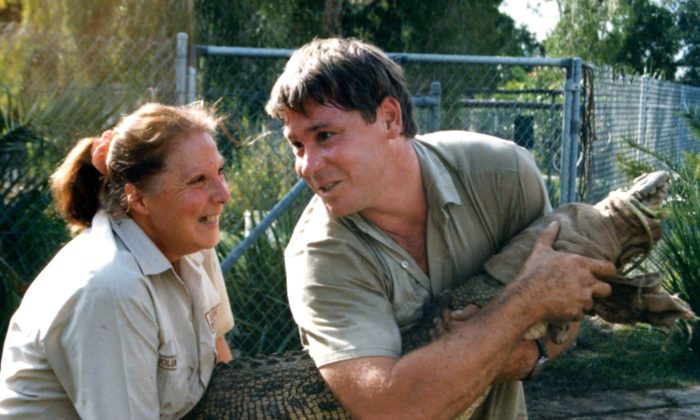 Robert Irwin honored his late father, who died in 2006, with a post on Instagram. He shared two photos of him and his father as they fed a crocodile.

The photos showed the two striking the same pose about 15 years apart. The same crocodile, Murray, was included in the photo.

Steve Irwin was killed by a stingray while filming near Australia’s Great Barrier Reef in September 2006. He was 44 years old.

His children, Robert and Bindi, as well as wife Terri, survived him.

Robert and Bindi have appeared in their own TV show, “Crikey! It’s the Irwins,” which shows them caring for animals at the Australia Zoo.

Bindi Irwin, last year, celebrated her father’s birthday with a message on Instagram.

“Happy Birthday to my dad and grandmother. I wish so much that I could give you birthday hugs. You are both in my heart today and I hope you are celebrating together,” Bindi wrote.

Happy Birthday to my dad and grandmother. I wish so much that I could give you birthday hugs. You are both in my heart today and I hope you are celebrating together ❤️

In 2016, to mark the 10th anniversary of Irwin’s passing, Steven’s father, Bob Irwin, released a touching letter written by the popular TV personality and passionate conservationist.

The letter, penned by Irwin when he was 32, says: “Dear Dad + Mum, Probably one of the most unfortunate things in a ‘Bloke’s Life’ is that it takes over 30 years to realize how essential you have been to build my character, my ethics and, most importantly, my HAPPINESS.”

Steve said, “For the rest of my life I will reflect on the unbelievably GREAT times we’ve shared and will continue to share. You’re my best friends! Thank you. Steve.”

The letter was published in Bob’s memoir “The Last Crocodile Hunter: A Father and Son Legacy.”

“Working on this book, I have been constantly reminded of Steve’s boundless energy, infectious humor and unrestrained passion for wildlife in our far too short a time together,” Bob Irwin told News.com.au.

“I hope that sharing these stories can be a pertinent reminder of the enormity of his legacy, a legacy that has not only taught us the importance of reconnecting with our environment but to be passionate in doing so,” Bob added.