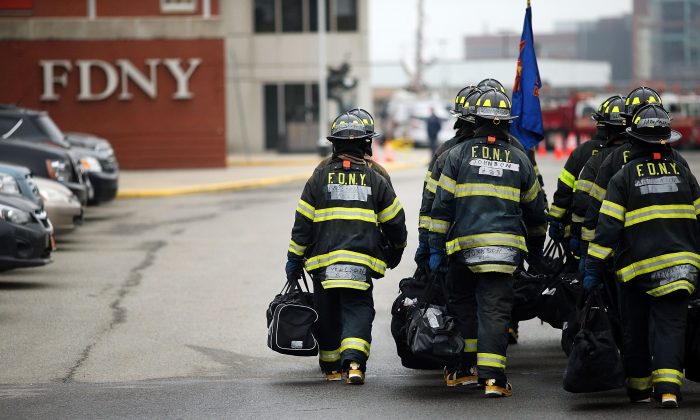 The son of a convicted terrorist will now work to fight fires like the one his father helped to start in 1993.

Omar Ahmed Sattar graduated from the New York City Fire Department (NYFD) Academy last month, about 12 years after his father, Ahmed Abdel Sattar, was convicted of “soliciting crimes of violence” and conspiracy to murder Jews, according to the New York Post.

The court found that the elder Sattar, now 58 years old, used his home to aid the Sheik Omar Abdel Rahman, who was behind the 1993 bombing of the World Trade Center that killed six and injured over 1,000.

Rahman and his cohorts also reportedly had plans to bomb other structures in New York City, but were arrested before they could carry them out.

An FDNY spokesperson said they were not concerned about the elder Sattar’s awful connections.

EXCLUSIVE: The son of a convicted terrorist is among the FDNY's newest firefighters https://t.co/7zzWNDV1Mc pic.twitter.com/pi20ylaviU

“Omar Sattar will be judged on the merits of Omar Sattar,” FDNY spokesman Jim Long told the Post.

The younger Sattar said he was inspired to be a firefighter after a fireman rescued his family’s cat when their own house was damaged by fire.

The younger Sattar worked in the city’s Department of Sanitation for three years before joining the FDNY, the Post reported.

When Sattar’s father was awaiting sentencing for his support of terrorists, Sattar pleaded in a letter:

“I know that he did not commit any crimes or plan to. I feel that an injustice has been done. My father is a man of honesty and kindness, he wouldn’t attempt to hurt anyone or even think about it,” wrote Omar, who was 18-years-old at the time, according to the Post. “Yes, he has views, like so many people, but his views were just that and nothing more.”

When the Post asked the FDNY if they were aware of Sattar’s connections to terrorism, they did not address Sattar’s case directly.

It means the world to me to be here –#FDNY Probationary FF Omar Sattar https://t.co/EGL8yQ1Kq8 pic.twitter.com/DePT46lIrB

“This will probably be the first time we’ve hired someone with a family history of terrorism,”  Joseph Giacalone, a retired NYPD sergeant and adjunct professor at CUNY’s John Jay College of Criminal Justice, told the Post.

“If he passed the background check, we can’t hold him accountable for the sins of the father. You gotta give this kid a fair shot.”