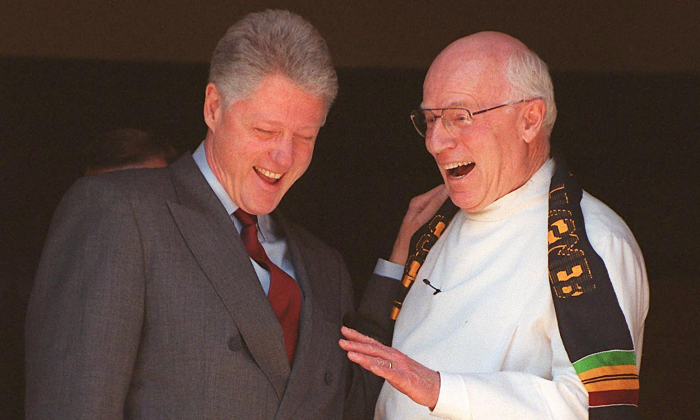 The Intelligence Community Inspector General (ICIG) suspected in early 2016 that the son of a prominent Clinton-defending preacher leaked sensitive information from a small team working on the Clinton-email inquiry, according to documents released to the public on Aug. 14.

Intelligence Community Inspector General Charles McCullough suspected that Paul Wogaman, the son of a preacher to the Clintons, was leaking information from the small team reviewing the classification levels of the emails from former Secretary of State Hillary Clinton’s unauthorized server, according to the testimony of ICIG investigator Frank Rucker, who spoke to Congress on Dec. 4 last year.

According to Rucker, McCullough was so concerned about the leaks that he “considered pulling and examining everybody’s phone records,” the interview transcript states.

McCullough came to suspect Wogaman as the leaker after Wikileaks released John Podesta’s emails. In one of the emails, dated Feb. 9,  2016, David Kendall, the attorney representing Hillary Clinton in the email-server probe, describes a meeting which took place the same day between Jennifer Duck, the chief of staff to Sen. Diane Feinstein (D-Calif.) and a person described only as “our favorite son.”

Kendall wrote that Duck has informed him that “she’d heard–but second/third had (and not from our son) that IC IG was handing out anti-HRC clips to journalists.” The email also says that the “favorite son” was meeting “with OCS today.”

Clinton-campaign manager John Podesta forward the email to Cheryl Mills, Bryan Fallon and other Clinton-linked people. Duck’s name is redacted from the Senate documents but appears in full on Wikileaks.

The ICIG reviewed attendance records for the day of the “OSC” meeting and found that the only male employee who was on leave from the ICIG office the same day was Wogaman. As a result, the ICIG suspected that Wogaman was the leaker, according to Rucker.

Rucker told Congress that “McCullough made a decision not to confront” Wogaman and that “he does not believe that ICIG ever did an official assessment on whether Mr. Wogerman [sic] leaked classified information,” the transcript states.

Wogaman “pushed very hard to be included on the investigation, but he was NOT part of it,” Rucker added. Wogaman now works at the Office of the Director of National Intelligence (ODNI) Mission Integration Department, according to Rucker. The Epoch Times reached out to the ODNI with a request for comment.

In addition to revealing the concerns about leaks from the ICIG, Rucker told Congress that he was tailed by the same Jeep at odd hours of the day for two weeks. According to Rucker, McCullough was also tailed by a Jeep from work to his home. In addition, someone was sorting through McCullough’s recycling bin at home “and leaving separate stacks of items outside of the bin as if they were looking for papers.” Another ICIG employee, identified as “Hackett” in the transcript, had all of the computers stolen from his home as part of a burglary, Rucker said.

McCullough told Fox News in 2017 that he received pushback from then-head of the ODNI James Clapper when he raised concerns about issues with Clinton’s emails.

The Epoch Times reached out to McCullough for comment, but he declined to speak without permission from the ODNI.

Paul Wogaman is the son of Rev. J. Philip Wogaman, who preached at the Foundry United Methodist Church during Bill Clinton’s term in office. Bill and Hillary Clinton frequented the church, which is located a few blocks from the White House, on Sundays for years.

J. Philip Wogaman was a radical preacher who supported partial-birth abortion and homosexuality. In addition to publicly defending Bill Clinton during the Monica Lewinksy scandal, Wogaman stood up for the communist regime in the Soviet Union. A 1998 article provided to Congress described Wogaman as the Clintons’ “awfully sympathetic minister” who “sounded less like a clergyman than a purveyor of the Clinton line.”