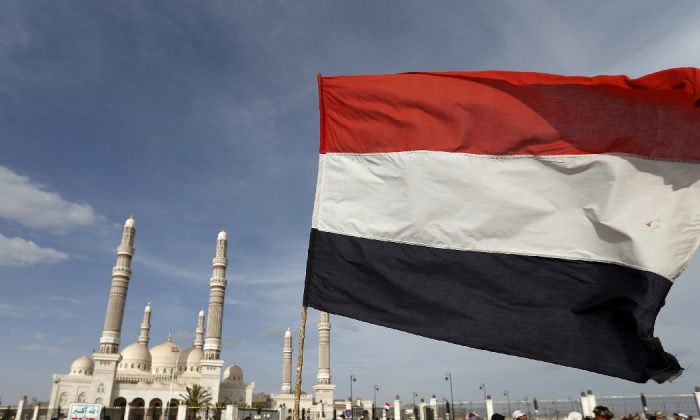 Son of American Freed in Yemen Says Dad Is ‘Safe’

DALLAS—The son of an American oil worker recently freed after being abducted 18 months ago in Yemen said on Feb. 27, that his father is getting reacquainted with his Yemeni wife and their children, and that he hopes to talk to him soon.

“All I know right now is that he’s safe and that’s all that really matters to me,” Army Sgt. Maj. Cale Burch, one of Danny Burch’s three children from an earlier marriage, told The Associated Press.

President Donald Trump announced Monday that Danny Burch had been freed and thanked the United Arab Emirates for its role in reuniting Burch with his family. It’s still unclear who abducted him in Yemen in September 2017, a Middle Eastern country that has been riven by civil war.

It is my honor today to announce that Danny Burch, a United States citizen who has been held hostage in Yemen for 18 months, has been recovered and reunited with his wife and children. I appreciate the support of the United Arab Emirates in bringing Danny home…

Cale Burch, who is assigned to the U.S. Army Special Operations Command headquartered in Fort Bragg, North Carolina, said he got a phone call Sunday from the FBI letting him know a release had been brokered for his father.

He said the FBI had been in contact with him while his father was being held. The younger Burch said he didn’t know the exact day his father was released, but he said his father is now going through a reintegration period.

A coalition led by Saudi Arabia, with the United Arab Emirates being a key member, has been fighting the Iranian-backed Houthis in Yemen since 2015. A year earlier, Houthis pushed the internationally recognized government out of the capital Sanaa.

Mohammed Ali al-Houthi, the head of Houthis’ Revolutionary Committee, said Tuesday that Danny Burch was held by a “terrorist” group in areas under control of the Saudi-led coalition.

Danny Burch is married to a Yemeni national, and the couple has three children. He was 63 when he was kidnapped in September 2017. At the time, his wife told The New York Times that her husband had left their home in Sanaa to take their sons to a sports club but never returned. She said police later told her that he’d been stopped by five armed men in civilian clothes who took him away.

Danny Burch, who grew up in Louisiana and East Texas, has spent most of his career as a mechanic in the oil and gas industry. Cale Burch said his father started working in Yemen about 25 years ago, for about a month at a time.

“About 15 years ago he made the decision to just stay there as an expat,” said Cale Burch, adding that he’d kept in touch with his father through social media before he was abducted.

Cale Burch said he and his siblings worried about their father as turmoil enveloped the county in recent years. He said many expatriates left, but that his father had built a life for himself there and was part of a core group of expats who stayed.

“I think he was cautious, but I don’t know that he was nervous about anything, he was going about his routine whenever he was taken captive,” he said.

He described his father as a “hardworking guy” and a loving father who “doted on us kids whenever we were growing up.”

“My family, we’re a family of faith, and we kept him in our prayers. And our prayers were answered,” Cale Burch said.