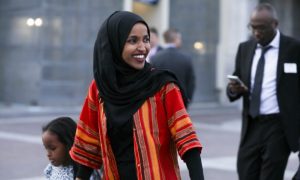 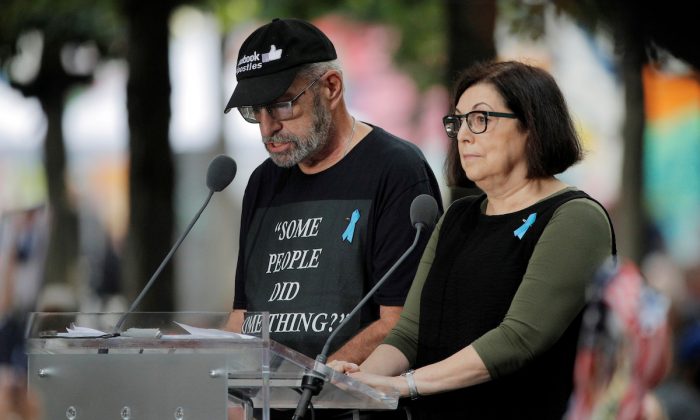 The son of a Sept. 11, 2001, terror attack victim said people had criticized him, calling him a racist, after he blasted Rep. Ilhan Omar (D-Minn.) during his speech at the 18th-anniversary memorial service of the attacks at Ground Zero yesterday.

Nicholas Haros Jr. attracted the media’s attention when he delivered pointed criticism to the freshman congresswoman for her “some people did something” remarks. Omar had been heavily criticized for using those words to describe the deadliest terrorist attacks in American history that claimed the lives of nearly 3,000 innocent people.

During an appearance on Fox’s Sean Hannity show on late Wednesday, Haros Jr. said her remark had “tore [his] heart apart” as well as his mother’s, who was killed during the deadly attack.

“That hurt. I am a victim’s son, and I decided to take 9/11 as my one day, of perhaps, credible standing to make that statement, which many people have told me, it represented their views,” he told Hannity.

The Fox host responded saying that he thinks Haros Jr. has the standing to make his statement in response to Omar.

“You have credible standing on this issue. You lost your mother. She died that day; you saw it happen before your eyes,” Hannity said.

Haros Jr. then revealed that not everyone agrees with his remarks during his speech, with some accusing him of being a racist.

“It’s not very nice, and maybe the worst thing that was said about me today was that I was a cranky old man with a bad haircut,” he said. “But seriously, charges of racism?”

During his speech on Sept. 11, Haros Jr. called out Omar for making the remarks, without mentioning her by name, and explained to her about the pain Americans felt on that day.

“‘Some people did something’ said a freshman congresswoman in Minnesota to support the creation of CAIR,” Haros Jr. said. “Today I’m here to respond to you exactly who did what to whom.”

“Madam, objectively speaking, we know who and what was done. There is no uncertainty about that. Why your confusion?” he continued. “On that day 19 Islamic terrorists, members of al Qaeda, killed over 3,000 people and caused billions of dollars of economic damage. Is that clear? But as to whom, I was attacked. Your relatives and friends were attacked. Our constitutional freedoms were attacked and our nation’s founding on Judeo-Christian principles did. That’s what ‘some people’ did.”

Earlier in the year, Omar received widespread condemnation after part of a speech she made at a Council on American-Islamic Relations (CAIR) fundraiser—during which she said the radical Muslim group was founded after the terror attacks—surfaced on social media.

Omar immediately received backlash for the comments from politicians, congressional candidates, first responders, and from the president.

President Donald Trump wrote on Twitter, “WE WILL NEVER FORGET!” with an accompanying video compilation of footage from the terrorist attacks in response to Omar’s comments. The video ends with the text, “September 11, 2001, We Remember.”

Meanwhile, Omar’s comments also prompted longtime police officer and decorated army veteran Chris Kelley to announce his bid for Minnesota’s 5th Congressional District against the progressive congresswoman. In a previous interview with The Epoch Times, Kelley said he was first motivated to run against the freshman congresswoman following her trivialization of the Sept. 11, terrorist attacks.

“It was a slap in the face to the people that lost their lives there and the first responders in general,” said Kelley, who was deployed once during Operation Desert Storm and twice during Operation Iraqi Freedom. He said the comments were disrespectful to the thousands of people who lost their lives and first responders who worked tirelessly in the aftermath of the tragedy.

In a Twitter post on Sept. 11, Omar wrote: “September 11th was an attack on all of us. We will never forget the thousands of Americans who lost their lives in the largest terror attack on U.S. soil. I will continue to fight to make sure we care for the first responders and families who lost loved ones.”