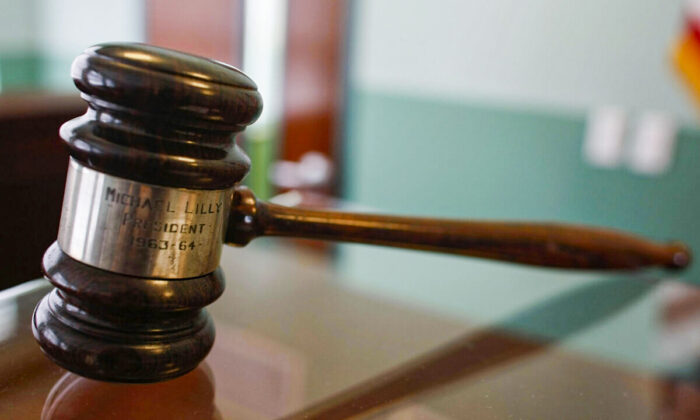 A judges gavel rests on top of a desk in the courtroom of the newly opened Black Police Precinct and Courthouse Museum in Miami, Fla., on Feb. 3, 2009. (Joe Raedle/Getty Images)
Southern California OC News

Son Gets Life in Prison For Killing Dad, Dad’s Girlfriend in Aliso Viejo

SANTA ANA—A 31-year-old man was sentenced Aug. 24 to life without the possibility of parole, plus 84 years and four months to life, for fatally shooting his father and his father’s girlfriend and wounding two other roommates in the family’s Aliso Viejo home after his father told him to stop drinking beer and get a job.

Luke William Ferguson was convicted July 27 of two counts each of murder and attempted murder, along with a special circumstance allegation of multiple murders. Jurors, who deliberated for about three hours, also found true sentencing enhancements for the discharge of a gun causing great bodily injury or death.

Ferguson was convicted of shooting the victims at about 2:45 p.m. Oct. 12, 2017, at a home at 6 Ashbury Court. His father, Doug Ferguson, 59, and the father’s girlfriend, 51-year-old Lisa Cosenza, were killed, while Todd Kuchar and Brandon Dufault were injured.

“This murderous rampage targeted everyone and anyone in his way and even went out of his way to try to kill everyone in that house,” Orange County District Attorney Todd Spitzer said in a statement. “Luke Ferguson is a cold-blooded murderer and he will spend the rest of his life in prison where he will no longer be able to harm innocent people.”

Kuchar testified that the shooting started downstairs, where his father and Cosenza were, and continued upstairs where Dufault was showering.

Ferguson fled the scene in Dufault’s car with his father’s blood on the sole of his shoe, Senior Deputy District Attorney Jennifer Walker told jurors during the trial.

“The defendant is going to tell you by his actions,” Walker said in her opening statement of the trial. “He’s the only one there who fled the scene, who stole a car, took a gun, and tried to elude police for a day.”

Ferguson’s attorney, Chris McGibbons of the Orange County Public Defender’s Office, said the defendant had moved back in with his dad about six weeks prior to the shooting.

Everyone in the home got along well, but, “The only complaint would be Luke was eating all the food and drinking all the beer and he didn’t have a job,” McGibbons said.

Luke Ferguson’s father was prodding his son to get steady work and would sometimes take his son out on jobs with his demolition crew, McGibbons said.

The five roommates all sat down for a nice dinner the night before the shooting, McGibbons said, insisting that everything was “perfectly cool” among the roommates.

“There’s no motive for this,” McGibbons said in his closing argument.

They all gathered for lunch the next day around 2 p.m. Luke Ferguson told Dufault he had plans to see his girlfriend in Los Angeles later, McGibbons said.

A next-door neighbor called 911 when she heard a firecracker-like sound that she quickly realized after a second blast was actually gunfire, McGibbons said. The neighbor said she also heard a woman pounding on a screen door shouting, “Let me in, let me in,” and told police later that it sounded like Cosenza.

According to McGibbons, Kuchar claims Luke Ferguson just walked down the stairs, racked the gun, and blasted his father in the chest while he was on the couch watching TV with Cosenza.

Kuchar allegedly told the man helping him that Luke Ferguson drove out of the area in Dufault’s car, McGibbons said. But when deputies arrived, Kuchar said the shooter was still in the house, McGibbons added.

Dufault was seen outside the home with a blue towel to his face because his face and eyes were wounded by shattered glass when the victim was shot while showering, McGibbons said.

Deputies found marijuana and guns in the master bedroom’s locked closet, McGibbons said. All of the residents smoked marijuana, and more guns were found in the father’s locked safe, the attorney said.

Another neighbor told deputies she saw a man with a teal blue shirt hiding in a neighbor’s yard, McGibbons said. Luke Ferguson was wearing a light blue shirt, he added.

Luke Ferguson was arrested about three hours after the shooting in Inglewood.