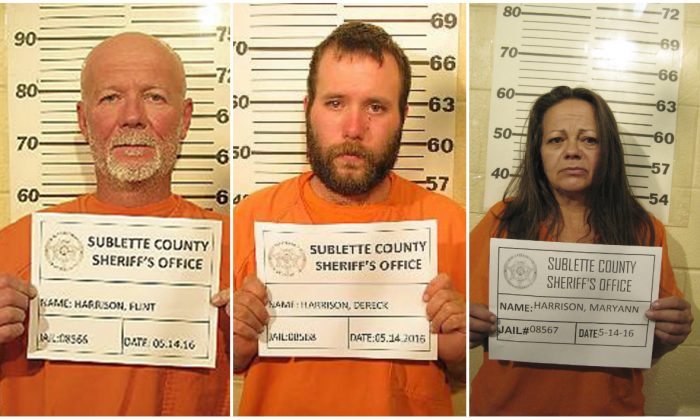 PINEDALE, Wyo.— The abduction of a woman and her four teenage daughters in Utah has led to the arrest a father and son in western Wyoming, and the son’s mother was also detained for allegedly violating probation in an effort to help him.

The two men — Flint Wayne Harrison, 51, and Dereck James “DJ” Harrison, 22 — were both arrested in Wyoming Saturday after being accused of luring the woman and her children to a Utah house last week and tying them up. They eventually managed to escape.

The Sublette County Sheriff’s Office said Sunday that 45-year-old Maryann Dalrymple Harrison of Bountiful, Utah, traveled to Wyoming to assist her son, and was detained herself for allegedly leaving Utah without the permission of probation authorities.

The office didn’t provide any more information about the woman, including her probation or the relationship with the elder Harrison.

Meanwhile, authorities said the victims in the entrapment case were thrilled and relieved to learn the two suspects charged in the bizarre attack were in custody.

But despite their arrests, neither man was cooperating with investigators trying to learn more about what led up to the violence.

Officers culminated a manhunt late Saturday night with the arrest of Dereck Harrison, several hours after the surrender of his father, the sheriff’s office said.

The men face various charges stemming from the Tuesday attack in Centerville, Utah, including aggravated kidnapping and possession of a controlled substance.

The younger Harrison was arrested without incident shortly after 10 p.m. MDT, in the forested Half Moon Lake area of western Wyoming. He was booked into the county jail. He told the U.S. Forest Service officer who arrested him that he had been hiding in the trees and brush most of the day until he saw a helicopter involved in the search and knew police were closing in, Centerville Lt. Von Steenblik said. He walked toward officers who were manning a roadblock and surrendered, officials said.

Police had said the younger Harrison was heavily armed with rifles and knives, but he was unarmed when authorities arrested him, the lieutenant said.

His father turned himself in earlier in the day and had been helping authorities find his son.

“This is an incredible end to a very stressful day,” Sheriff Stephen Haskell said.

The men are accused of tying the mother and daughters up with zip ties. When the elder Harrison hit the woman with a baseball bat, the teens began to break their ties and try to escape, according to charging documents. In the struggle that followed, one girl slapped away a shotgun pointed at her throat and another grabbed the bat and hit the son, police said.

The victims managed to escape.

The father and son had been using methamphetamine heavily over several days and falsely believed the woman had reported them to authorities, police said. Both have refused to talk to investigators since their arrests, Steenblik said.

The younger Harrison was a close friend of the woman’s family. He often visited the home for dinner or picked the girls up from school. The teens, aged 13 to 18, had known him for several years.

The Harrisons fled and were eventually picked up by someone who took them to Salt Lake City, where they spent Tuesday night in a hotel.

The elder Harrison is a registered sex offender. He surrendered in Pinedale for reasons still unknown to police.