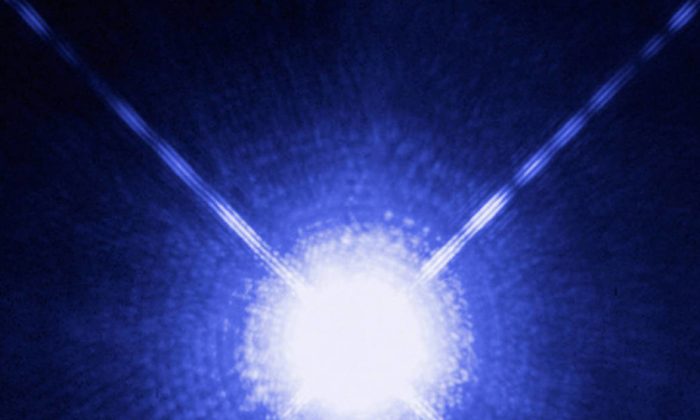 3D visualisation of the Ring Nebula, with material flung out from the dying star in the center. This gas may eventually form new stars, planets, and ultimately even life. (M. Kornmesser/ESA/Hubble and NASA)
Science

Something New Under a (Dead) Sun

For all their enormous size and furious energies, stars are remarkably simple. Knowing just their mass and the smattering of elements heavier than hydrogen we can predict their lives from cradles to grave. But every now and then, nature throws us something truly bizarre as as reminder that we ain’t seen everything yet.

As reported in Science, just such an oddity has been found in a search of over 30,000 white dwarfs, the end state of stars similar to our sun. This white dwarf appears to be made almost entirely of oxygen. And how it formed is truly a puzzle.

A star is a fusion bomb, burning light elements like hydrogen and helium through nuclear fusion to form heavier elements like carbon and oxygen. The bigger the star, the brighter it burns and the faster it uses up this fuel.

Stars no more than ten times the mass of our Sun will tend to throw out their nuclear “ash” of heavy elements into space, forming planetary nebulaes, which will eventually condense to form new stars, rocky planets and ultimately maybe even give rise to life like us that breathes the oxygen and eats this carbon. As Carl Sagan noted, we’re made of star-stuff.

What’s left behind in a dying star is a glowing cinder with the mass of our sun crushed to the size of the Earth. This incredible density means that a teaspoon worth of this object would be about the mass of a truck. We call this a white dwarf and it is the fate of our own sun in 5 billion years’ time.

End of the Road, Not the Story

This newly discovered white dwarf has half of our sun’s mass in a size no bigger than Earth, meaning the surface gravity is 100,000 times that of Earth. For you to walk on this would be like trying to walk with 40 blue whales on your back. That’s assuming you haven’t burnt to a crisp on its glowing white hot surface, with temperatures over 20,000K (red hot would be just 1,000K).

Like the ash of campfire, you can tell what’s been burnt by examining what’s left over. In your camp you might wood ash or melted plastic perhaps but with the tremendous nuclear fires in stars we are left with individual elements. The bigger the initial star, the hotter it burns, and the heavier the elements left over.

In the case of this white dwarf we only see oxygen, meaning all the carbon has been fused into this heavier element. The puzzle is, our models tell us that it can’t have produced the conditions to fuse carbon, meaning there’s something we’re missing in our models of how stars can die.

One idea is that towards the end of the progenitor star’s life it began to “pulse” as its outer layers were raised up by the intense pressure of the radiation only for this material to crash back to the surface and temporarily create intense conditions to fuse all the carbon into oxygen.

Then any remaining lighter elements like hydrogen and helium might also have been gravitationally stolen by a nearby companion (that has yet to be found) finally leaving a white dwarf containing only oxygen.

In having oxygen 25 times more common than any other element, this object is unique amongst the tens of thousands white dwarfs that have been surveyed. Yet the fact it exists at all has implications for the way that amazingly destructive events in our universe, called supernovae.

In some supernovae, white dwarfs detonate like ticking time bombs, all with the same brightness. This means we can use them as “standard candles” to measure distances based on how faint they appear. Measuring the expansion of the universe with these standard candles earned ANU Vice Chancellor Professor Brian Schmidt a share of the Nobel Prize in Physics 2011.

While a white dwarf is the end of the road for a star, this latest discovery shows there’s still much to be learnt about these extreme objects.

Alan Duffy is a research fellow at Swinburne University of Technology in Australia. This article was originally published on The Conversation.