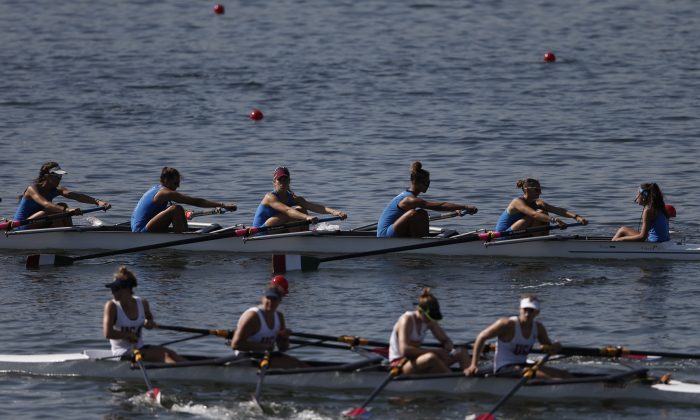 RIO DE JANEIRO—Thirteen rowers on the 40-member U.S. team came down with stomach illness at the World Junior Rowing Championships—a trial run for next summer’s Olympics—and the team doctor said she suspected it was due to pollution in the lake where the competition took place.

The event took place amid rising concerns about the water quality at venues for the Rio de Janeiro Olympics, now less than a year away.

The Americans were by far the hardest hit at the regatta that concluded last weekend, with reports of vomiting and diarrhea. Other teams in the competition reported some illnesses, according to World Rowing, the sport’s governing body, but those were about as expected at an event that featured more than 500 young rowers.

On July 30, The Associated Press published an independent analysis of water quality that showed high levels of viruses and, in some cases, bacteria from human sewage in all of Rio’s Olympic and Paralympic water venues, including Rodrigo de Freitas Lake, where the rowing competition took place.

U.S. coach Susan Francia, a two-time Olympic gold-medal rower, said in an interview with the AP that 13 athletes and four staff members—including herself—suffered various gastrointestinal symptoms during the team’s two weeks of training in Rio.

Dr. Kathryn Ackerman, the U.S. team physician, said athletes from several other countries stayed in the same hotel as the Americans, but did not seem to get as sick as her rowers.

“We’re not really sure. My personal feeling is, I think it’s from the lake.”
— Dr. Kathryn Ackerman, U.S. team physician

“I don’t know if it was the water bottles in the boats, or hygiene precautions that some athletes are really good about and others weren’t,” she said.

Officials did not rule out that the Americans could have gotten ill from food or drinking water.

“We’re not really sure. My personal feeling is, I think it’s from the lake,” Ackerman said.

Francia said she lacked the data and information to directly blame the illness on the venue, but added: “It just doesn’t seem normal.”

She warned athletes coming for the Olympics that “you should know when you’re coming next year that you have to be smart about how you are preparing.”

Francia said the U.S. team had taken precautions about competing in the polluted lake beneath Rio’s picturesque Christ the Redeemer statue, “but maybe we were not as strict in enforcing them as we should have been from the beginning.”

US Rowing, which oversees the sport in the United States, said it is investigating what sickened the athletes, who range in age from 16 to 19. None are likely to be Olympians next year.

Rowing officials will debrief the athletes when they return to the United States, likely through the rest of the week. They will talk to the athletes, and review protocols for cleanliness.

Ackerman said she became worried when one U.S. boat tipped over in the lake, although the athlete who got thrown into the water was not among those who became ill.

“Obviously we were all concerned because we know the water’s polluted.”
— Dr. Kathryn Ackerman, U.S. team physician

“Obviously we were all concerned because we know the water’s polluted,” she added.

The Americans’ experience is almost certain to raise more concerns for the Olympics. About 10,500 athletes will attend the Summer Games, and 1,400 will participate in rowing, sailing, triathlon, canoeing, and distance swimming in the waters around Rio.

“You don’t want to see athletes in the boat-park vomiting,” Francia said, recounting that the competitor she saw get sick was not an American. One of the U.S. rowers did faint in a dining area, she added.

The AP analysis of water began in March and was performed by noted Brazilian virologist Fernando Spilki, coordinator of the environmental quality program at Feevale University in southern Brazil. It showed dangerously high levels of viruses from sewage in all Olympic venues. The samples were checked for three types of human adenovirus, as well as rotavirus, enterovirus, and fecal coliforms.

These are viruses that are known to cause digestive and respiratory illnesses, including explosive diarrhea and vomiting, but can also in rarer cases lead to more serious heart, brain, and other diseases, such as hepatitis A.

The AP testing, which will continue through the Olympics, also checked for bacterial fecal coliforms—which at times during the study peaked at the Olympic lake to 10 times the acceptable limit for secondary contact per Brazilian regulations.

In two separate emailed statements following the AP study, the World Health Organization affirmed it was advising the International Olympic Committee “to widen the scientific base of indicators to include viruses.” The WHO underscored that it’s actually up to the local Olympic organizing committee in Rio to order that viral testing be done.

However, in an emailed statement Monday, Aug. 10, the organization reversed course and said that “WHO has not and will not issue an ‘official recommendation’ on viral testing.”

The local committee has not responded to repeated requests for information on whether it will order the viral testing.

Matt Smith, the head of World Rowing, said he wants the IOC and local organizers to ask the state of Rio de Janeiro to do viral testing in the run-up to the Olympics.

However, the Rio state environment agency does not have the equipment or the trained personnel to carry out viral testing of water, according to local virologists. The agency confirmed it only does bacterial testing, since that is all Brazilian law, like that of most nations including the United States, demands.

Smith said the rowing, sailing, swimming, canoeing, and triathlon federation could unite to test if the Rio state officials declined to.

“If they don’t agree, or don’t want to, we will discuss together what to do and probably finance our own test,” Smith said.

Peter Sowrey, the CEO of sailing’s world governing body ISAF, told AP that he would seek independent testing for viruses “to understand exactly what we are dealing with.”

Sailing will take place in Guanabara Bay, rowing and canoeing in Rodrigo de Freitas, and triathlon and swimming off Copacabana Beach.

Peter Cookson, the high-performance director for the Canadian team, said he had “absolutely no problems” at the regatta. But he had questions about risks.

“I’m not an expert in viruses. We’ve never encountered this,” he said. “I’m struggling with what the right answer is to protect the rowers.”

Rio Mayor Eduardo Paes and IOC member Carlos Nuzman, who heads the local organizing committee, appeared at the venue over the weekend.

Paes, who has repeatedly acknowledged that Rio “missed an opportunity” to clean its waters for the Olympics, said he would follow the IOC’s lead on viral testing.

Swiss rower Katharina Strahl, noting that the lake was “smelly in a few places,” was able to joke about the pollution.

“I don’t think in this lake they’ll be throwing the coxswain into the water,” she said.