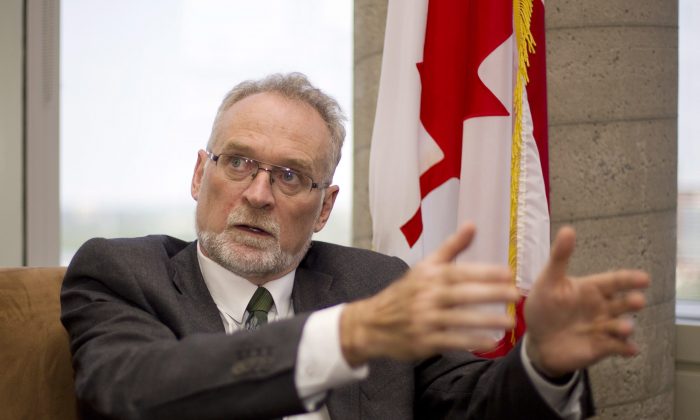 Auditor General Michael Ferguson speaks during an interview in his office in Ottawa on June 10, 2015. Ferguson said he and his auditors encountered a deeply rooted feeling among some senators that they didn’t have to be accountable for their expenses. (The Canadian Press/Fred Chartrand)
Canada

Some Senators Reluctant to Give Evidence to Support Claims, AG Says

OTTAWA—A scathing review of Senate spending nearly included more names—including one senator who refused to co-operate with auditors until realizing at the last minute he would otherwise face the glare of public scrutiny.

In an interview Wednesday, June 10, auditor general Michael Ferguson said with the audit nearly complete, the senator in question finally relinquished and provided access to documents auditors had been seeking for months.

The explanation? “Ego got in the way,” he said.

Ferguson would not identify the senator. But he said the intransigence spoke volumes about the sort of attitudes he and his auditors encountered over the two years it took for them to complete their report.

“That illustrates that again how deeply rooted—at least for some senators—[was] the feeling that they didn’t have to be answerable for their expenses.”

Ferguson reported on 30 senators with problematic claims, nine of whom have had their files referred to the RCMP for a criminal review, including two still sitting: Conservative-turned-Independent Sen. Pierre-Hugues Boisvenu and Liberal appointee Sen. Colin Kenny.

Of 21 others, four paid back the disputed expenses, insisting they’d done nothing wrong. The other 17 will make use of an arbitration process set up by the Senate and headed up by former Supreme Court justice Ian Binnie.

That illustrates that again how deeply rooted—at least for some senators—[was] the feeling that they didn’t have to be answerable for their expenses.
— Auditor general Michael Ferguson

Ferguson’s report described a culture of entitlement in which some senators opted for more expensive options when cheaper choices were available. There were hockey games, fishing trips, board meetings, anniversaries and funerals that Ferguson found had nothing to do with Senate business.

Ferguson said he wasn’t surprised by the findings; senators had not been transparent about their expenses and were able to justify a claim simply by telling Senate administration it was for “parliamentary business.”

Three years ago, Ferguson’s office found senators provided enough paperwork to support expenses in more than 94 percent of the small number of claims reviewed. There were similar findings in the House of Commons.

“What it shows you is, sometimes a 95 percent level can sound like a good compliance rate, but you also have to look at just what exactly does it mean when there’s a five percent non-compliance (rate),” Ferguson said.

Senators named in the report accused Ferguson of pre-judging the outcome before he started the audit process, and also accused his auditors of conducting a flawed or incomplete review.

Ferguson said in some cases, senators could have sought extra material to support their claims, but didn’t do so before the audit was released.

“I’m confident that our files support what we have found,” he said. “If somebody has additional evidence that they didn’t bring to us, well, that’s a different situation, but I’m confident that we would have considered everything in every case.”

Ferguson said auditors carefully handled each individual audit knowing the findings would affect the careers and reputations of the senators involved. Ferguson said his team did a test on each case to determine if a senator would be named in the audit.

On whether he would conduct a similar audit of spending by members of the House of Commons, Ferguson said his office stands ready to do whatever is asked of it MPs.

“The pressure is not only now going to be on the Senate to implement our recommendations, there is also going to be a certain expectation that the House of Commons examine its own practices.”

He said an audit of every MP would be more costly than the Senate review, which carries a total price tag of $23.6 million—about half of which his office would have incurred whether the audit took place or not.