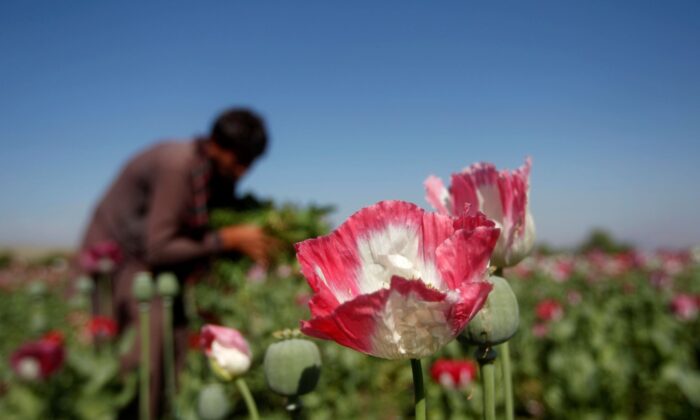 An Afghan man works on a poppy field in Jalalabad Province on April 17, 2014. (Parwiz/Reuters)
Social Issues

Some Restaurants in China Serve Food Laced With Opium, Despite Years of Crackdown

In China, some restaurants add illegal opium poppy to their food to keep customers coming back. In late August, a restaurant in Jiangsu Province was busted for using poppy shells as seasoning after one of its customers went to the local police station with a sample of a dish he had ordered.

The illegal and harmful practice is not uncommon as it is encouraged by the highly competitive and morally corrupt business environment in China, one observer noted.

Poppy shells contain opioids and adding them to foods is strictly forbidden in China, due to its addictive and various toxic side effects.

But for more than 2o years, restaurant owners have been using poppy shells to hook customers, despite repeated prohibitions. Hotpots or noodles laced with ground poppy shells have a unique aroma, making the dish very flavorful and addictive.

In late August, a man in Lianyungang city, Jiangsu Province went to the local police station with a portion of a noodle dish that he had ordered from a restaurant. He said the dish had an unusual flavor and suspected that it contained poppy shells, according to Chinese state media. The police found papaverine and narcotine—drug ingredients derived from opium poppy— in the noodles.

The restaurant was searched and a large pot of chili oil that contained poppy shells was confiscated. According to Chinese media reports, the police said the restaurant owner, surnamed Li, bought poppy shell ingredients from a spice vendor. His concoction attracted more customers, which helped his business quickly turn around amid the economic slowdown caused by the pandemic.

Opium poppy is the main raw material for the drug opium. It can also be used in medicine to extract a variety of sedatives, including morphine, codeine, papaverine, and narcotine. Adding poppy shells to foods such as hotpots and other spices can produce a unique aroma, which can be addictive and lead to other toxic side effects.

Studies have shown that long-term consumption of foods with poppy shells will cause symptoms such as chills, sweating, fatigue, and damage to the nervous and digestive systems. Eventually, it would lead to opium addiction.

The use of opium poppy as a drug has led to strict legal restrictions on its cultivation in many countries.

As early as 2008, China had listed opium poppy as an “illegal non-edible substance” in its food law. In 2017, the national food safety plan issued by the central authorities also listed the use of poppy husks in food production as a practice that would lead to “severe punishment.”

Although Beijing issued a number of relevant regulations, the illegal use of opium poppy emerged one after another due to a lack of oversight.

On Aug. 23, a beef soup restaurant in Mianchi county, Henan Province, was found to have used poppy shells in the chili oil. A local court sentenced the restaurant owner to one year in prison and fined for 60,000 yuan ($9,279).

Food containing opium poppy has also found its way into college cafeterias. According to the verdict released by the district court in Lanzhou city on March 10, Xu Deyou, who ran a restaurant at Lanzhou University of Technology, was found guilty of using narcotine and papaverine in the chili oil.

In May, the underground trade in poppy shells was exposed in a number of traditional Chinese medicine distribution centers. Liang Shan, a Chinese herbal medicine dealer, said he has 300 kilograms of poppy shells every month, and supplies food vendors and a well-known restaurant brand, according to Chinese state media CCTV.

Li Yuanhua, a former associate professor of education at China’s Capital Normal University, told The Epoch Times on Sept. 12: “The food and beverage industry has used poppy shells for more than 20 years. Businesses are aware of the harm, but morally corrupt people will do anything to pursue profits, using any means. In the past, steamed buns were smoked with sulfur to turn them white, and lychees were sprayed with low sulfuric acid to make them look fresh.”

“Why do people flock to buy overseas products such as Australian milk powder? Aside from the fact that the cattle growth environment is good in Australia, the Chinese know that Australians don’t add [harmful substances to milk powder] such as melamine in it. Because of China’s domestic vicious competition, when others are cheating to drive down costs, it is hard for businesses to maintain integrity and quality. The morality of the whole environment has deteriorated. Even adulterated and harmful products are bought by people. There is a market [for it]. It’s not an isolated problem,” Li said.

He added: “In the past, people believed that good and evil were rewarded. Morality restrained people [from committing bad deeds]. Why can’t people do this now? Because after the CCP destroyed traditional culture, people believed in atheism and forgot about karma [the consequences of doing bad deeds], or did not believe in it at all,” Li said.