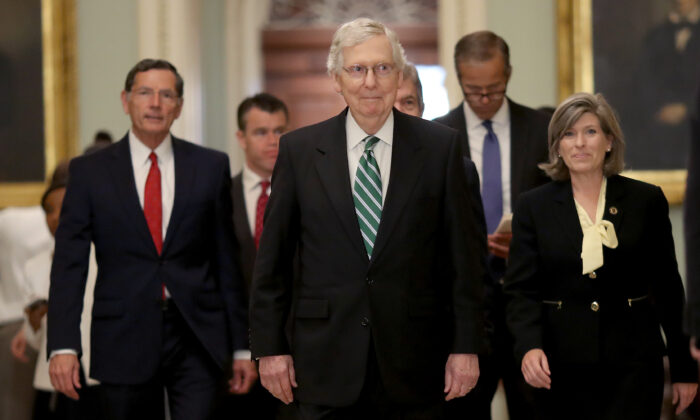 Several Republican Senators have indicated that they will not watch the public phase of the impeachment hearings in the House, slated to start on Nov. 13.

Sen. Richard Shelby (R-Ala.) told The Hill that he isn’t going to watch the hearings in the House as it “could prejudice my view” when the impeachment articles reach the Senate.

“I wouldn’t want to see that,” he said, adding that during the trial of President Bill Clinton, he “waited to hear the evidence that came before the Senate.”

Senate Judiciary Committee Chairman Lindsey Graham (R-S.C.) said that he won’t be watching the hearings, saying the impeachment inquiry is a “sham” process.

“It’s being driven by political people,” he told the news website. “I think this is a bunch of crap in the House.”

Sens. Marco Rubio (R-Fla.) and Joni Ernst (R-Iowa) noted that they have work to do.

Sen. Mitt Romney (R-Utah), a prominent Trump critic on the Republican side, said he would evaluate the hearings.

“I certainly anticipate that when the time comes I will give this a very thorough dedication and evaluation,” Romney said. He also added that he hadn’t read any of the House-released transcripts of the depositions.

Sen. Roy Blunt (R-Mo.), who is the chairman of the Senate Rules Committee, told The Hill that he believes “the thing that will impact how my colleagues look at this—ultimately, most—is whether it continues to be a largely partisan process in the House or not.”

“If they come up with information that’s very persuasive to a whole lot of Republican House members, that’s a totally different situation when it comes over here than if it comes over with the same kind of vote that they had already to open the impeachment inquiry,” he added.

And Sen. John Kennedy (R-La.) noted that “having been appellate law clerk and having practiced law for a while … it’s very very hard to judge witness credibility based on a transcript.”

Meanwhile, Senate Majority Leader Mitch McConnell (R-Ky.) told reporters that the Senate impeachment trial will most likely end up with the same outcome as the past two efforts to impeach a president.

“I will say, I’m pretty sure how it’s likely to end,” McConnell said. “If it were today, I don’t think there’s any question it would not lead to a removal.”

“So the question is: Just how long does the Senate want to take?” he asked. “How long do the presidential candidates want to be here on the floor of the Senate instead of in Iowa and New Hampshire?” He is referring to Democratic Sens. Kamala Harris, Elizabeth Warren, and Bernie Sanders.

The House will have two days’ worth of public hearings and will call upon George Kent, a top State Department official, and William Taylor, a top Ukraine diplomat, to testify in public. Marie Yovanovitch, the former ambassador to Ukraine, will also testify during the hearing.

Trump, meanwhile, has pilloried the public phase of the inquiry.

“It was just explained to me that for next weeks Fake Hearing (trial) in the House, as they interview Never Trumpers and others, I get NO LAWYER & NO DUE PROCESS. It is a Pelosi, Schiff, Scam against the Republican Party and me. This Witch Hunt should not be allowed to proceed!” Trump wrote on Twitter last Thursday.

For the past several weeks, House Democrats led by Intelligence Committee Chairman Adam Schiff (D-Calif.) have held secretive closed-door meetings, only releasing the transcripts of the depositions to the public in the past week.