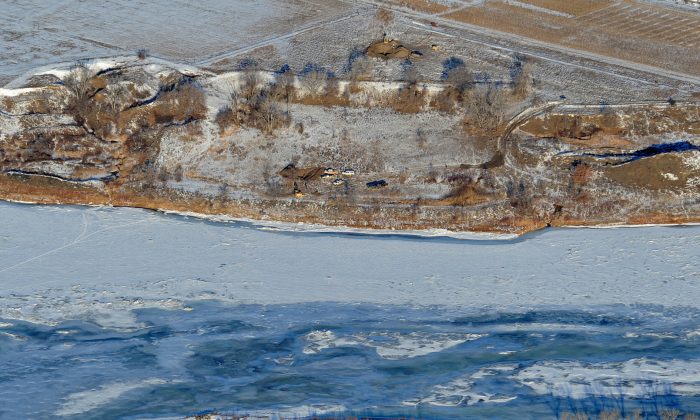 Crews work to contain an oil spill from Bridger Pipeline's broken pipeline near Glendive, Mont., in this aerial view showing both sides of the river on Monday, Jan. 19, 2015. Officials said that they were bringing truckloads of drinking water to Glendive after traces of 50,000 gallons of oil that spilled into the Yellowstone River were found in the city's water supply. (AP Photo/The Billings Gazette, Larry Mayer)
US

Some Oil Recovered From Broken Pipeline After Yellowstone River Spill

GLENDIVE, Mont.—Workers recovered about 10,000 gallons of oil from a ruptured pipeline thatspilled crude into the Yellowstone River and contaminated a Montana city’s drinking water.

An estimated 40,000 gallons is still in the river and will be difficult to extract because of a thick layer of ice.

The recovered oil was crude that was left over in the pipeline after the breach.

Bridger Pipeline Co. spokesman Bill Salvin said Wednesday only a “very small” amount of oil has been siphoned from the river itself. Company officials and government regulators say most of the oil is thought to be within the first several miles of the spill site.

“What we’re working on is identifying places where we can collect more oil,” Salvin said. “The cleanup could extend for a while.”

Montana Department of Environmental Quality Director Tom Livers said he was concerned that when the ice breaks up in the spring, oil will spread farther downstream.

The spill occurred just upstream of Glendive. Authorities are working to clean up the agricultural community’s water supply after cancer-causing benzene was detected at its water treatment plant.

Bridger Pipeline has committed to providing bottled water for Glendive’s roughly 6,000 residents until the water treatment plant is running again.

The federal Centers for Disease Control and Prevention said the benzene levels were above those recommended for long-term consumption, but they did not pose a short-term health hazard.

Efforts to cleanse the water plant began Tuesday as officials added more activated carbon — a type of charcoal — to the water treatment process.

Water that went through the more intensive treatment method was to be tested Wednesday.

If it works, the city’s water could be restored by Friday, DEQ spokeswoman Jeni Garcin said. If it doesn’t, officials plan to add equipment that will pretreat water coming into the facility. It’s uncertain how long that might take.

A mechanical inspection of the damaged line Tuesday revealed the breach occurred directly beneath theriver, about 50 feet from the south shore. Its cause remains unclear.

Oil sheens have been reported as far away as Williston, North Dakota, below the Yellowstone’s confluence with the Missouri River, officials said.

Many in Glendive have criticized the timing of Monday’s water advisory, which came more than two days after oil spilled from the 12-inch Poplar Pipeline that runs from Canada to the town of Baker.

Adding to the frustrations has been uncertainty over how long the water warning will last.

Peronard and others involved in the response said officials acted based on the best information available.

“Emergencies don’t work in a streamlined fashion,” said Bob Habeck with the state environmental quality agency. “It’s a process of discovery and response.”