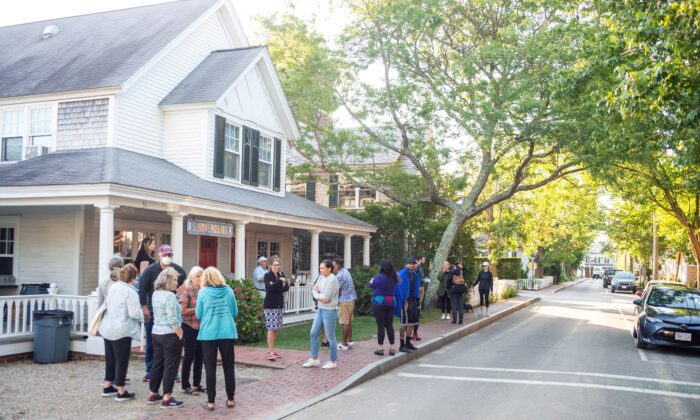 Illegal immigrants gather, after being flown in from Texas on a flight funded by Florida Gov. Ron DeSantis, at Edgartown on Martha's Vineyard, Mass., on Sept. 15, 2022. (Vineyard Gazette/Handout via Reuters)
Viewpoints

Some Modest Proposals for Govs. DeSantis, Abbott to Continue Their Excellent Work

The recent “transfers” of “undocumented,” and therefore “noble,” aliens—as opposed to those poor saps who actually apply to immigrate legally—to Martha’s Vineyard, Vice President Kamala Harris’s front yard, and other such places by Republican Govs. Ron Santis of Florida and Greg Abbott of Texas have created predictable consternation among members of the MHRC (Members of the Hypocritical Rich Class).

George Bernard Shaw used to call them MIRC (Members of the Idle Rich Class) but these people work hard to destroy our country. They’re not so idle. I had to give them their due—thus, the MHRC.

Therefore, since the open border isn’t only wrecking the United States via thousands of fentanyl deaths, endless human trafficking, terrorist infiltration, and so forth and also laying waste to Mexico itself, with the cartels on the verge of taking over the entire country—if they haven’t already—I had to do my minor public service and offer the following suggestions to the governors.

Gentlemen, here are some possible destinations where I am certain these excess illegal aliens (excuse me, “poor undocumented souls”) will be welcomed with the most open of charitable arms, as they were in Martha’s Vineyard. These people, after all, are “progressive.”

Feel free to add your suggestions in the comments. I tried to keep this a little bit light, but the situation isn’t.

To say we are living in dark times is an understatement. When the FBI is grabbing Mike Lindell’s cellphone at a Hardee’s, in a manner that my friend John Hinderaker properly compares to the Gestapo, you know you’re living in a country not far different from communist China.

Thank God we have a few politicians like DeSantis and Abbott who are prepared to stand up and mock them, but in truth, it’s mostly up to us now.

We are the new “resistance.” The left—brainwashed or subject to mass formation psychosis, if you prefer—went crazy with “cultural appropriation” (in this case from the Holocaust and the original French “résistance”) by declaring themselves “the resistance” after the election of Donald Trump.

But what exactly were they resisting? Nasty tweets to Rosie O’Donnell? Orange hair? The middle class and minorities, including women, having their highest incomes ever?

Most likely, it was really the preservation of their Deep State jobs—an America that had morphed into socialism and was soon to be sucked into globalism, the land of “you will have nothing and you will be happy.”

But they, the ones at the top, will have a lot—more than ever. They already do.

You’re not supposed to notice that as the private jets fly overhead to Davos, Switzerland, for the latest World Economic Forum on how to alleviate poverty. (You see what I mean about the MHRC—Members of the Hypocritical Rich Class.)

This must be resisted at all costs and in all ways. There are many, obviously, but one of them is comedy, which actually is among the most potent. It was all over the Soviet Union during its darkest periods.

We must mock them constantly in as many ways as we can—not just via the often hilarious Babylon Bee, or even as the estimable governors are doing and hopefully will continue to do, but in every way possible.

They can’t take a joke because they are a joke.

Resistance by mockery should be one of our prime weapons. And when we mock, we must mock our own weaklings as well, those who want us to believe we are living through a period of business as usual, with perhaps minor variations.

We most definitely are not.

ADDENDUM: Someone who could hugely benefit from the Martha’s Vineyard affair, should he wish, is Alan Dershowitz. The famed attorney complains ad infinitum that he’s no longer welcome at parties on the Vineyard, even though he was a good boy and voted for Joe Biden.

Now, we can all see plainly what the selfish creeps who inhabit that island are really like, ejecting the impoverished aliens as fast as humanly possible, not to mention similar behavior from the mega-hypocrites running so-called sanctuary cities from New York to California.