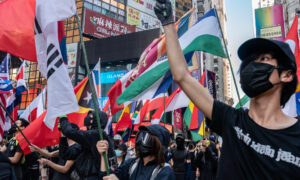 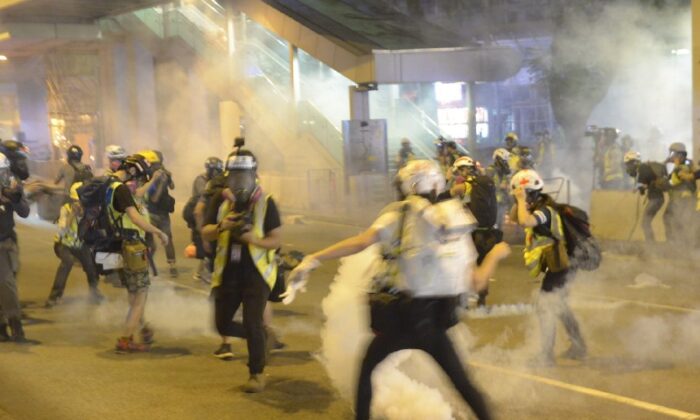 A journalist who has been reporting at the front lines of Hong Kong’s anti-government protests revealed on Facebook that he was diagnosed with chloracne a few days ago—a rare skin eruption of blackheads, cysts and nodules, which has been linked directly to dioxin exposure. Hong Kong’s medical experts believe the dioxin exposure came from the use of tear gas by Hong Kong police.

Another internet user also exposed on social media that many police officers had contracted chloracne as well, but senior police officers forbade them to tell others, for fear that it would scare other policemen.

Yuhong Chan, a journalist working for Hong Kong-based Stand News, said in his Facebook post on Nov. 13 that he has been doing on-site reporting of the protests at least once a week in the past two months. He started to experience skin irritation since October. When he went to see a doctor of Chinese medicine a few days ago, he was confirmed to have contracted chloracne.

“I don’t have much fear,” he continued, “My life will be worthwhile as long as I love others, love myself, do well in my work every day, and use my expertise (as a journalist) to participate in the creation of a new Hong Kong.”

Shortly after Chan posted his story on Facebook, an internet user published an anonymous post, saying that as far as he knows, quite a few policemen contracted chloracne as well.

According to the post, his mother is the owner of a small salon. A female client who visits the salon regularly is the wife of a police officer. One day, this client burst into tears while she was getting a facial at the salon, saying that her husband was diagnosed with chloracne.

When her husband visited the doctors for the first time, he did not reveal that he was a policeman. The doctors thought it was skin allergy and prescribed medicine accordingly. The treatment only made his skin condition worse. He then went to see a dermatologist, and was diagnosed with chloracne. He later told his colleagues about his skin problem, and found out that they also had similar symptoms. Then all his colleagues went to see doctors, and all were confirmed to have chloracne.

The salon client also revealed that her husband was granted sick leave, but his supervisors forbade him from spreading the news, lest other policemen would get scared.

Several medical experts published a joint open letter on Stand News, calling on the Hong Kong police to give more consideration to public health and safety.

“It is not an exaggeration to say chloracne is incurable. Dioxins and dioxin-like compounds are very stable—once absorbed into the body, it is difficult to excrete and their half-life is as long as 20 years. In other words, when these compounds enter your body, there is no cure. The medication prescribed by doctors can only relieve the symptoms temporarily,” the letter stated.

What is even worse is that chloracne is simply the symptom of early-stage poisoning from the highly toxic dioxins, according to these experts. If dioxins inside the human body exceed the safe limit, they may eventually lead to serious health issues such as various cancers, weakened immunity, and endocrine disorders. For pregnant women, dioxins can cause miscarriage or deformed fetus, and dioxins may likely be passed on to the baby.

The medical experts pointed out that upon firing, the temperature of the tear gas goes above 400 degrees Celsius (752 degrees Fahrenheit). At such a high temperature, the main component of tear gas, chloroacetophenone (CN), will release dioxin-like compounds, which can enter the human body through skin contact, food, water and inhalation.

They believe that for journalists who are at the front lines, skin contact is one of the major routes. Even with protective equipment such as a mask or a respirator, some parts of the body are still exposed to the surroundings.

Hong Kong’s Anti-Extradition Bill Coalition has collected all the data related to the police firing of tear gas, based on police press conferences in the past six months, and concluded that police fired at least 9,362 rounds of tear gas from June 12 to Nov. 13.