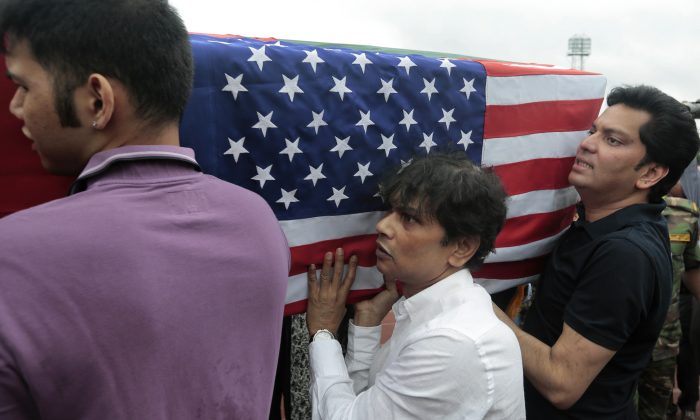 Relatives of Abinta Kabir, student of Emory University of U.S., carry her coffin draped with the Bangladesh and U.S. flags after a ceremony for victims of the attack on the Holey Artisan Bakery, in Dhaka, Bangladesh, Monday, July 4, 2016. The brutality of the attack, the worst convulsion of violence yet in the recent series of deadly attacks to hit Bangladesh, has stunned the traditionally moderate Muslim nation and raised global concerns about whether it can cope with the increasingly strident Islamist militants. (AP Photo)
International

Some Former Hostages Being Questioned Over Bangladesh Attack

NEW DELHI—Some of the hostages rescued from the weekend attack on an upscale restaurant in Bangladesh’s capital were questioned Monday by investigators searching for clues about the possible masterminds behind the gruesome attack that left 28 dead, including many foreigners.

Authorities were still holding five of the 13 hostages rescued when commandos stormed the restaurant in Dhaka’s diplomatic zone Saturday morning, killing six of the attackers and capturing one, according to officials.

Bangladesh police chief A.K.M. Shahidul Haque said authorities would be interrogating two men, including a suspected militant, who were detained during Saturday’s operation. He would not say whether either had been among those counted as hostages, only that they were being treated in a hospital for unspecified injuries.

A second official said the five former hostages still being held included a Canadian citizen of Bangladeshi origin and a Bangladesh-born British citizen. The official spoke on condition of anonymity, as he was not authorized to speak to the media about the ongoing investigation. The official said authorities were looking into the backgrounds of the five people and questioning their families and friends.

Global Affairs Canada, the government department which manages Canada’s diplomatic and consular relations, and consular officials at the High Commission of Canada in Dhaka said they had not received any reports of a Canadian citizen being detained.

It was not clear if all five were suspects, or if they were being held and questioned simply because authorities thought they might offer useful information in tracing the origins of the attack.

The official confirmed investigators were also speaking with a third man described by local media as a Bangladeshi who was trapped inside the restaurant along with his wife and two children. The man, a teacher at a private university in Dhaka, had returned to Bangladesh recently after living nearly 20 years in Britain.

Some photographs and several crude videos taken from an apartment near the Holey Artisan Bakery show the man talking to someone while attackers allowed him to leave before paramilitary forces launched the rescue operation on Saturday. The man’s friends and police also said the one of the attackers was a student in the same department at the university where the man teaches.

The brutality of the attack — the worst convulsion of violence yet in the recent series of deadly attacks to hit Bangladesh — has stunned the traditionally moderate Muslim nation and raised global concerns about whether it can cope with increasingly strident Islamist militants.

That the attackers targeted a popular restaurant in the heart of the diplomatic quarter of Bangladesh’s capital signaled a shift in militant tactics. Previously, most attacks were carried out by gangs of young men wielding cleavers and machetes and hacking individual victims before fleeing.

The Daily Star newspaper on Monday said the bloody hostage crisis had left “the nation shattered and with a sense of extreme unease.” The editorial also criticized authorities’ consistent denial of the presence of any international terrorist groups, even as the Islamic State group claimed responsibility for the attack and released gruesome photographs that apparently depicted the torture of hostages.

“The methods employed and the savagery with which the killings were carried out are hallmarks of international terrorist outfits like ISIS and al-Qaida. This is clear,” the newpaper said. “What is not clear is whether, after such overwhelming evidence of their presence, the official line will be one of denial?”

Bangladesh police have said they are investigating whether the attackers had links to the Islamic State group, though the home minister insisted IS had no presence in Bangladesh and could not have guided the attack. The government has blamed the restaurant attack and other recent killings on domestic militants bent on imposing Islamic rule.

The Italian Foreign Ministry, after nine Italians were killed in the restaurant, posted travel advisories saying it could not exclude the possibility of further attacks in Bangladesh. The advisory urged people to exercise the “utmost prudence,” particularly in places frequented by foreigners, and to limit their activities to only what was necessary.

Suicide Bomber Hits Near US Diplomatic Site in Saudi Arabia

Also, Indian police were checking vehicles crossing the border that five Indian states share with Bangladesh in case any militants were trying to flee, according to the head of India’s Border Security Force.

On Monday, surrounded by tearful family members and a heavy security detail, Prime Minister Sheikh Hasina and diplomats from Italy, Japan and other countries laid flower wreaths beside the coffins holding the three Bangladeshi victims.

The coffins were draped in the Bangladeshi flag—a red disc on a green background. That of Emory University student Abinta Kabir, a Miami resident whose family confirmed she was a U.S. citizen, was also partially covered with a U.S. flag.

Two police officers and 17 other hostages—nine Italians, seven Japanese and one Indian—were killed. Those bodies were to be flown back to their home countries on Monday.

Family and friends of 19-year-old Tarishi Jain gathered in the New Delhi suburb of Gurgaon as her body arrived for a ceremonial cremation.

The stadium vigil was visited by hundreds of Dhaka residents, paying their respects to the victims.

The Italian ambassador and more than 100 other people attended a Catholic Mass in memory of the victims on Monday evening. Islamic prayer sessions and a candlelight vigil were to be held later in the evening.