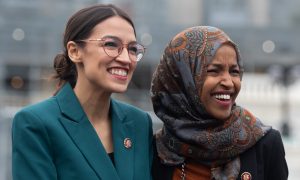 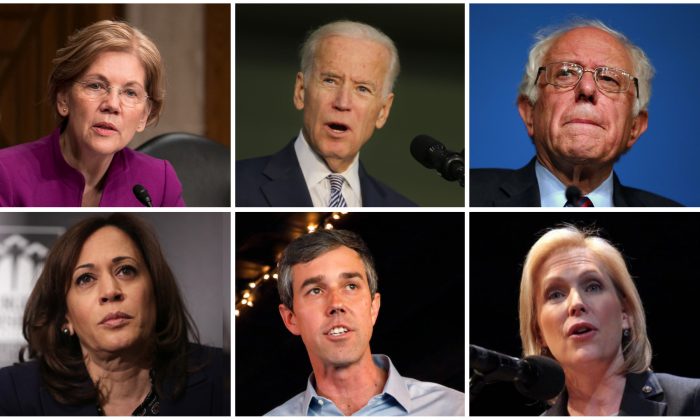 Some Democrats Worry Party Has Too Many Presidential Candidates

WASHINGTON—Former President Barack Obama’s fears about a “circular firing squad” forming among the 18 candidates now seeking the 2020 Democratic presidential nomination highlights a growing worry in some corners of the party.

“One of the things I do worry about sometimes among progressives in the United States, maybe it’s true here as well, is a certain kind of rigidity where we say, ‘Ah, I’m sorry, this is how it’s gonna be,’” Obama told a Berlin audience attending an event hosted by his presidential foundation on April 6.

“And then we start sometimes creating what’s called a circular firing squad, where you start shooting at your allies because one of them is straying from purity on the issues. And when that happens, typically the overall effort and movement weakens,” Obama said.

Democrats certainly have a surplus of potential targets if the shooting begins in earnest because, if all the declared and possible candidates officially declare, the total could near 30.

One top Democrat who worries the field is too big is David Burstein, founder and chief executive officer of Run For America, an activist civic group that focuses on maximizing the political impact of millennials.

“There are too many people running,” Burstein told The Epoch Times on April 4, when asked about the announcement by Rep. Tim Ryan (D-Ohio) of his candidacy.

“Instead, we’re going to have this incredibly chaotic primary and in the end, Trump wins,” he said.

But two Capitol Hill Democratic veterans interviewed April 8 by The Epoch Times see the same big field and reach the opposite conclusion about what it means for defeating Trump.

Jimmy Williams, a South Carolina-based Democratic strategist who was formerly senior economic policy adviser to Sen. Dick Durbin (D-Ill.), said he has “no problem with a ton of Democrats running for president of the United States because it tells us something important—the removal by an election of Trump is paramount.”

Williams also isn’t concerned about differences of opinion on issues such as Medicare for All and the Green New Deal among the multiple White House aspirants.

“There isn’t unanimity on those issues,” Williams said. “There’s a serious debate going on and I don’t think that’s a problem, either.”

“The fact that Trump beat Hillary Clinton should serve as a wake-up call for everyone in the party,” Manley said, “because that should not have happened. Trump is a fraud and phony and yet, we couldn’t beat him.”

Manley views the large field as a plus because “where some see a circular firing squad, I see a healthy debate within the party about where we are going and how we are going to get there.

“Even if anyone wanted to clear the field to keep the focus on Trump as much as possible, no one has the ability to do so. This is a wide-open race and all the nervous Nellie’s out there should just get used to it.”

‘Most Radical Progressive Ever’

For their part, many Republicans are amazed at what they see happening 21 months before the 2020 election.

“Don’t forget, Obama ran on a vague progressive message to fundamentally change America, but he did not abandon many traditional values until after he was elected,” Mark Fitzgibbons told The Epoch Times on April 8.

“These Democrats, trying to out-Bernie [Sen.] Bernie [Sanders], are no Trojan horses, but are in-your-face radicals, who obviously want the most radical progressive ever to be president,” Fitzgibbons said.

Heritage Action for America Executive Director Tim Chapman told The Epoch Times on April 8 that Democrats mostly agree on the issues, so they mount personal attacks as a means of standing out from the field.

“You have them attacking [former Vice President Joe] Biden for overly affectionate, old-school interactions, [Sen. Amy] Klobuchar for being a bad boss, [Sen.] Kamala Harris for being a former prosecutor, [Sen. Bernie] Sanders for being an old, white guy who is a retread, and so forth.

“This is a huge problem for them because they are doing the GOP’s opposition research on personalities, instead of the important work of vetting their far-left positions with the general public. That could really hurt them in the general election.”

And Americans for Limited Government President Richard Manning said he won’t be surprised if Obama “seeks to use his influence with key media and Silicon Valley leadership to call off the media dogs on Biden, whose long history representing Delaware in the Senate makes him particularly vulnerable to be cast aside as a 76-year-old relic.”

Reminded on April 8 of his comments from last week, Burstein said he sees two things happening in the Democratic party.

“There are some people who are looking at the moment and saying ‘We’ve got to get out there and do whatever we can to back X or Y,” he said. “But I think for the first time, we’re seeing a lot of established donors not leap to back someone.”

Burstein said, “If this were a cycle or two ago, no one would be backing people this early like [Sen. Kirsten] Gillibrand or anybody like that. But I think there are quite a few people who want to wait until the end, so it’s really created some chaos among donors.”

Balancing that factor, however, is that “there are more donors than ever before, and there’s a whole raft of people who got in the game really since 2016, so it’s shaking up the whole donor dynamic and what you would have to contend with.”

Burstein believes there are more candidates because there has been “a seismic shift away from the importance of the big donor. It’s not that they’re irrelevant, they are important, but what’s being created through the vast network of technology is that pretty much everybody has access to some small donors to fund them.”