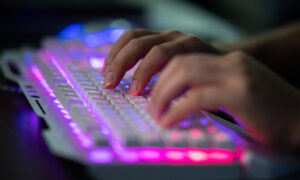 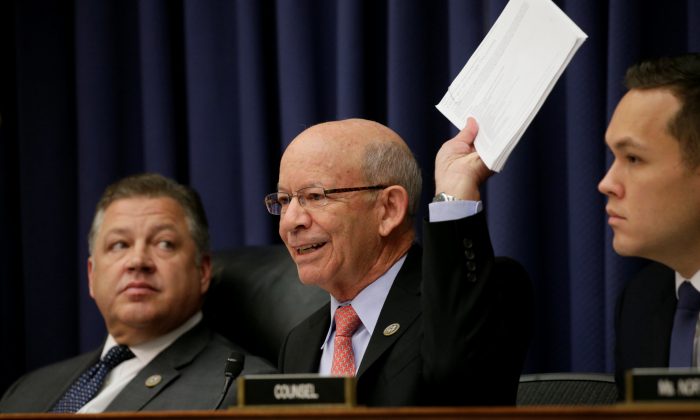 Rep. Peter DeFazio, D-Ore. (C) testifies at a House Transportation and Infrastructure Committee hearing at the Capitol in Washington, D.C., on May 2, 2017. (REUTERS/Kevin Lamarque)
Congress

Some Democrats Signal Opposition to the Bipartisan Infrastructure Package

Some progressive House Democrats and 30 members of the Transportation and Infrastructure Committee are indicating opposition to the Senate’s negotiations of the $1.2 trillion bipartisan infrastructure package.

Chair of the House Committee on Transportation and Infrastructure Peter DeFazio (D-Ore.) and 30 Democratic members of the committee sent a letter to House Speaker Nancy Pelosi (D-Calif.) and Senate Majority Leader Chuck Schumer (D-N.Y.) Wednesday to urge them to allow House Members to include provisions from the INVEST in America Act in any smaller bicameral infrastructure legislation.

The House passed the INVEST in America Act earlier this month by a bipartisan vote.

“The INVEST in America Act delivers meaningful, transformational policy solutions,” the Members wrote. “For the first time, the bill provides resources for states and communities to tackle transportation greenhouse gas emissions, the leading cause of U.S. carbon pollution, and to mitigate the effects of the climate crisis that are occurring today.”

They went on to say they will not support the Senate bipartisan bill as is.

“Many of these critical reforms are not included or have not been fully addressed through the Senate bipartisan infrastructure process. We should reject any effort to categorically exclude the thorough, transparent, and transformational process undertaken by the House,” the Democrats’ letter said.

Senate Majority Leader Chuck Schumer said on Thursday from the Senate floor, “Both major infrastructure proposals are essential to maximize our economic potential. Not just one, both. And together, they would give a massive boost to the economy, ease inflation pressures, create jobs, increase productivity and reduce income inequality,” said Schumer.

“These are incredibly worthy goals, and the Senate is going to keep working on both tracks of infrastructure in order to achieve them,” Schumer added.

Senate Republicans on Wednesday voted to block debate on the $1.2 trillion infrastructure proposal that was previously touted as bipartisan.

A group of 22 Democrat and Republican senators issued a statement to media outlets after the vote that they are “close to a final agreement” and are hopeful that a package will be finalized.

“We will continue working hard to ensure we get this critical legislation right—and are optimistic that we will finalize, and be prepared to advance, this historic bipartisan proposal to strengthen America’s infrastructure and create good-paying jobs in the coming days,” they said in a statement.

“The whole thing is really disappointing. I think it does slow down the process,” said Rep. Lloyd Doggett (D-Texas), adding that he hopes the Senate’s failed vote leads to a “willingness on the part of a couple of senators to go ahead” and ditch the GOP talks in favor of a Democrats-only bill.

“They’re eating time,” said Rep.Gerry Connolly (D-Va.), referring to the bipartisan Senate group. “And having been burned back in ’09 and ’10 by the Republicans in the Senate on the Affordable Care Act, we are understandably wary.”

Meanwhile, Senate Budget Chair Bernie Sanders (I-Vt.) said one way or the other all the provisions in the two packages were going to get passed.

“I can’t give you an exact timeline, but I think that we are going to have every Democratic senator on board,” Sanders told reporters Wednesday. “At the end of the day … the $600 billion in physical infrastructure, you can do it in the bipartisan bill, or you can combine it with one bill. One way or another, it’s going to happen.”

Republicans have made it clear that they oppose the $3.5 trillion package. Ranking member of the Senate Budget Committee Senator Lindsey Graham (R-S.C.) last week criticized the Democrat’s $3.5 trillion reconciliation bill.

“The $3.5 trillion tax and spend package being proposed by Senator Schumer and other Democrats is using infrastructure as an excuse to raise taxes and expand government,” said Graham in a press statement.

“This proposal is not about infrastructure. It’s about expanding the role of government in our lives from cradle to grave. This is about a massive tax increase that will stifle economic recovery. It is about liberal wish list spending that will stoke the fires of inflation.