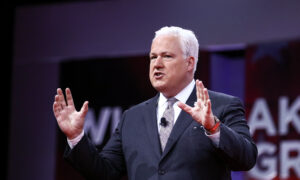 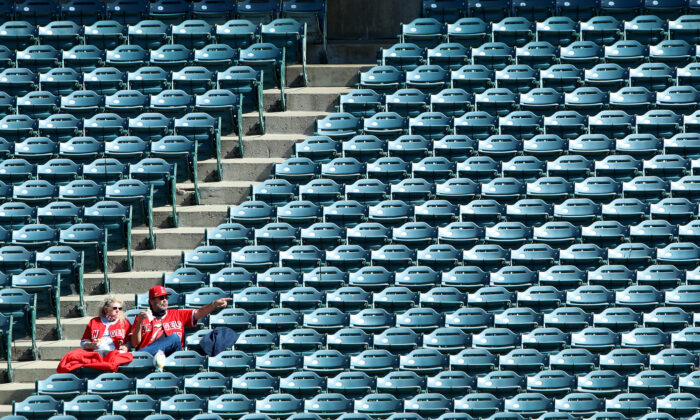 Fans look on during warm ups before the game between the Los Angeles Angels and the Cleveland Indians at Angel Stadium of Anaheim in Anaheim, Calif., on May 19, 2021. (Katelyn Mulcahy/Getty Images)
Baseball

Some Cleveland Indians Fans Not Happy With Team’s Name Change

After rooting for one of the most iconic teams in baseball for decades, generations of Cleveland Indians fans throughout the United States are not happy about what the team’s new name will be at the beginning of the 2022 Major League season—The Guardians.

The team announced its forthcoming name change last week, seven months after announcing it would eliminate the name and two years after ending its 90-year run of an Indian, Chief Wahoo, as its mascot. The new name is steeped in the city’s history, but how it will connect with fans, remains to be seen.

The team will remain the Indians until the end of the 2021 season, and the team’s blue and red colors will remain for future years, according to team management. The Guardians emerged as the team name after reporting slightly more than 1,000 possibilities. Other team names under consideration were Spiders, the original name of Cleveland’s baseball club from 1887 to 1899, the Buckeyes, the Rockers, and the Fellers, as a tribute to Indians pitching legend Bob Feller.

Although Cleveland Indians team officials see the elimination of the toothy-smiling Chief Wahoo mascot and the team name as an exciting time to correct what was viewed by some as racially insensitive, not everyone is so excited.

“The Guardians?” said lifelong Indians fan Tom McCarl, 54, of Spring Hill, Tennessee. “Yuck! I don’t like it. They’ll always be the Indians to me.”

“It’s a disgrace; it’s just asinine,” said Thomas Poore of Apache Junction, Ariz., east of Phoenix. “If Bob Feller knew what was happening to his Indians, he’d be rolling over in his grave. Named after the Guardians of traffic? … How stupid is that? It sounds like someone was reaching for an unpopular possibility. Not sure how the fans can connect with something that oversees traffic. Traffic is in every big city and nobody likes it.”

Poore, 50, has been an Indians fan since he was six years old. He moved to Arizona from Akron, Ohio, in 1995, for warmer weather and more job opportunities.

From Indians to Guardians

The name Guardians is derived from the 43-foot-tall Romanesque-looking concrete structures towering over motorists on the Hope Memorial Bridge, depicting the progress of transportation. From the late 1890s to about 1908, Cleveland was the leading auto manufacturing hub of the United States, ahead of Detroit.

The Hope Memorial Bridge is located at the western edge of downtown Cleveland with Progressive Field in the near distance. The “statues” per se, are officially called “Guardians of Traffic,” and it’s as if they are standing guard to Progressive Field near the end of the bridge. Each of the eight “Guardians” are holding a vehicle, one a 1930s-era automobile from about the time the bridge was built in 1932.

In a team-issued statement, Indians Owner Paul Dolan said, “Cleveland always has been the most important part of our identity. Therefore, we wanted a name that strongly represents the pride, resiliency, and loyalty of Clevelanders. Guardians [reflect] those attributes that define us while drawing on the iconic Guardians of Traffic just outside the ballpark on the Hope Memorial Bridge.”

Chief Wahoo already had been eliminated from the team’s jerseys and caps following the 2018 season through the push of organizations such as change.org, the Cleveland Indian Education Center, and the Cleveland-based American Indian Movement (AIM) with the support of embattled Major League Baseball Commissioner Rob Manfred.

When the Indians made the announcement in December that it would drop the name Indians, the team issued a statement alluding to the riots across the country fueled by the Antifa extremist group and the Black Lives Matter movement.

“We are committed to making a positive impact in our community and embrace our responsibility to advance social justice and equality.”

Meanwhile, the Atlanta Braves are keeping its stoic-looking Indian mascot donned in a colorful headdress, adorned with feathers. The Braves’ ownership maintains there are no intentions to eliminate their mascot or change the team’s name. That’s despite a renewed push by change.org to have the Braves renamed the Hammers to honor Hall of Fame baseball legend and former Home Run King Henry Aaron who died earlier this year.

Many others who have fiercely fought to have the team change its name don’t see it that way.

Before every Indians’ home opener since the early 1970s, various Native American groups have held protests outside Municipal Stadium and now at Progressive Field.

Jeff Pierce, who is the executive director of the Cleveland Indian Education Center and the non-profit organization People Not Mascots and the spokesman for the Ohio Chapter of AIM, participated in the opening day protests for 10 years. He said he will continue to do so as he believes the Indians’ team ownership isn’t going to change the name.

“I would’ve hoped to see a change years ago,” Pierce, 28, said of Chief Wahoo and the Indians team name. “Anytime you characterize a group of people as a caricature, it’s dehumanizing. Progressive Field isn’t too progressive because the insurance corporation [has] chosen to keep their name on the field.”

Pierce said he liked the team’s new name and mascot and that the Native American groups have concerns over what the team will do with the Chief Wahoo and Indians logos. He admitted Native Americans would like to “safeguard” them so no one profits from them, even for commemorative purposes.

“It would’ve been nice if the team would’ve shared some of the proceeds from the Chief Wahoo logo with Native American groups,” Pierce said. “That’s never happened.”

Robert Roche, executive director of AIM, expressed disappointment that representatives from AIM and the Cleveland Indian Education Center were not included at the table during the team’s renaming talks.

But, after the team’s new name was announced, Roche expressed optimism.

“Those are pieces of art over there,” Roche said of the Guardians. “It’s time for a new era.”

Bob Dibiasio, Senior Vice President of Public Affairs for the Cleveland Indians, didn’t return an email seeking comment, but the team reportedly is planning to continue selling Chief Wahoo and Indians items for historical purposes—and share part of the proceeds with Native American groups. A list of those who would benefit has not been released.

Pushback Against the Name Change

The elimination of the name Indians drew the ire of longtime baseball writer Hal McCoy of the Dayton Daily News. McCoy, who is in the writer’s wing of the Baseball Hall of Fame in Cooperstown, New York, is the longest-running writer of any MLB team. He has covered the Cincinnati Reds since 1973.

McCoy grew up in Akron and is an Indians fan.

“It is beyond absurd. It borders on insanity. It is a nickname, nothing more. It is a team’s identity,” McCoy wrote in an editorial. “And the irony of it all is that the nickname was not meant to demean Native Americans. The team was named in honor of one of its former players, Louis Sockalexis, believed to be the first Native American to play baseball.”

“It was a tribute, not a slur. I really don’t care what the team name will be,” McCoy wrote. “They’ll always be the Indians to me.”

Former President Donald Trump called the Indians’ name change “a disgrace” and an “insult” to Native Americans the team was honoring. For others, too, the team’s name always will be Indians and their games conjure up fond memories.

“On any given night, you could hear radio broadcasts of Indians games coming from the windows of peoples’ campers or from the transistor radios people were listening to around the campfires,” Tom McCarl, 54, who lived in nearby Atwater and now lives in Nashville, Tennesee, said. “You would be walking back to your camper at night and you’d hear that someone had stepped up to the plate. You’d stop in the roadway and listen in the darkness, hoping they would hit a home run.

“I don’t like it,” McCarl said of the forthcoming name change. “In this society, people are becoming too sensitive. I’m of Irish descent, and I’m not offended that Notre Dame University’s mascot is a caricature of a Leprechaun. I like the name Spiders for the Indians possible new name, but no matter what they change the name to, I’m always going to call them the Indians.”

“It’s a hard argument to face after generations of fans,” said Ricardo Rodriguez, director of the museum. “Remember, before the team was called the Indians, the team had other names, too.

The museum features numerous photos and mementos from Cleveland’s baseball history, including a small exhibit about Sockalexis—the first recognized Native American to play in the Big Leagues and for whom the Indians were named in 1915, two years after Sockalexis died and nearly 20 years after he quit playing baseball.

Sockalexis was a folk-like figure from the Penobscot Tribe on Indian Island in eastern Maine.

Nicknamed “Deerfoot of the Diamond,” Sockalexis played for the Cleveland Spiders from 1897 to 1899 and was one of the stars of the team until alcoholism and an injury led to his release from the team.

Chris Sockalexis, a descendant of Louis Sockalexis and one of the historians for the Penobscot Tribe, did not return phone calls seeking comment.

Chuck Carter, a worker for the Cleveland Recreational Department, was outside on the patio painting picnic tables on Historic League Park’s patio near the ball field.

“It’ll take some getting used to,” said Carter.

Carter said as a teenager in the 1960s, he used to sell pop and peanuts at long-gone Municipal Stadium during the Indians games.

“The Cleveland Indians are all we’ve ever known, but one thing I’ve just been saying is ‘Cleveland Baseball.’ That’s one way to keep it simple.”