Some Chinese Officials Resign When Ordered to Handle Coronavirus Outbreak 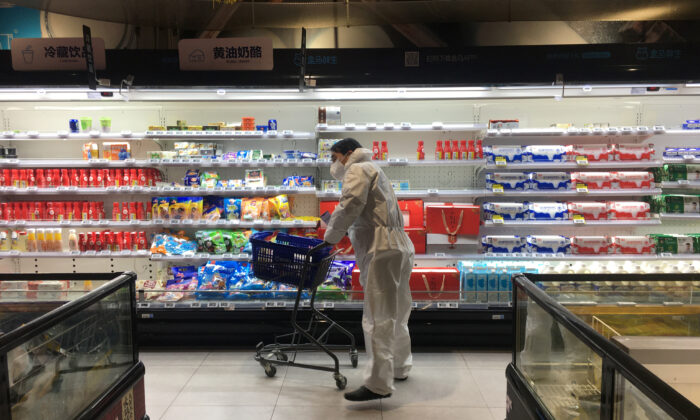 A customer pushes a cart while shopping inside a supermarket of Alibaba's Hema Fresh chain, following an outbreak of the novel coronavirus in Wuhan, Hubei province, China on 11, 2020. (Stringer/Reuters)
By Zoe Hu

Faced with the challenges of the coronavirus outbreak, several Chinese communist officials in Huangshi, Hubei Province, turned in their resignations when they were asked to manage the disease control in their respective jurisdiction.

The novel coronavirus, officially known as COVID-19, originated in Wuhan, the capital of Hubei Province. Huangshi is only 62 miles from Wuhan, and is also a city heavily stricken by the virus.

According to Hubei News, Cheng Binman, a cadre of Xinzha residential committee, announced her resignation on Feb. 2 via a phone call to the community’s Party secretary Chen Yali, without specifying the reason. Chen tried in vain to persuade her to stay.

Chen Qianyao, a cadre of Fupenshan residential committee, left her position on Jan. 24 without notifying her supervisors for 10 days. The committee issued a public notice to criticize Chen. She returned to work on Feb. 3, but submitted a resignation application the next day despite persuasion from her superior to stay on.

On Feb. 6, the community office officially ordered both Cheng Binman and Chen Qianyao to resign.

Lu Jinnian, the deputy director of the Judicial Bureau of Xialu District in Huangshi City, also abandoned his post on Feb. 3, while expressing discontent with the arrangement to have him lead the disease control work in local communities. After running into disputes with other members of the supervision team, Lu was removed from his posts as a member of the Party Leadership Group and the Deputy Director of the District Judiciary Bureau. His case is pending for further investigation by the District Discipline Inspection Commission.

Chinese netizens commented on these cases, saying that communist officials are so selfish and self protecting, and in the face of danger, their own interest comes above everything, including the safety of the people. It’s just the opposite of what the Chinese Communist Party claims in its propaganda.

One netizen wrote: “Why don’t they get expelled? Isn’t an order of resignation exactly what they wish for?”

Another netizen said, “The party member applied for resignation, and the result was an order to resign, how bizarre is that!”

Someone also pointed out that generally officials benefit from high salaries and abuse their power, but in the midst of danger, the first thing they think about is resignation. “To fight the epidemic is akin to fighting on a battlefield. What sort of crime is it to desert during a battle?”