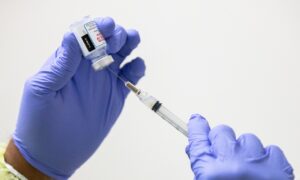 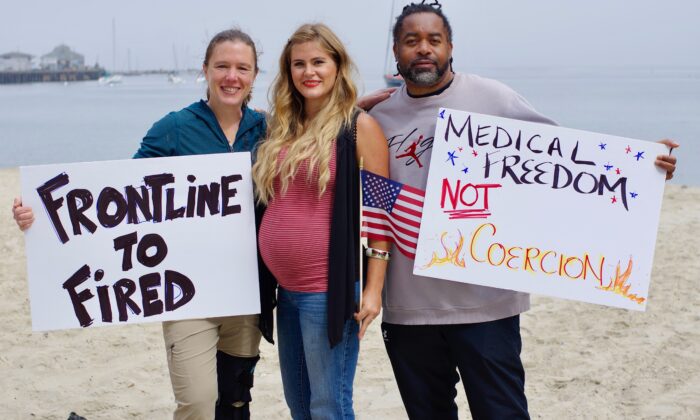 More than 70 employees at a hospital in Monterey, California, have decided to defy a state mandate requiring health workers to be vaccinated against COVID-19 by Sept. 30.

Elisabeth Sims, a registered nurse at Community Hospital of the Monterey Peninsula (CHOMP), told The Epoch Times the group of nurses and other medical professionals are planning to fight the state’s mandate, as well as the hospital’s policy that also sets a Sept. 30 deadline for all staff to get the COVID-19 vaccine.

“We’re just a group of medical professionals that are not going to be coerced into putting something into our bodies that ultimately doesn’t really work based on science,” Sims said.

The group, called the Patriot Freedom Fighters, staged a protest in downtown Monterey on Sept. 12. CHOMP employees were among the more than 150 people who attended the demonstration, she said.

“People don’t want the vaccine, and people are not going to be coerced into it,” said Sims.

The Sept. 30 deadline is based on a California Department of Public Health (CDPH) order signed by CDPH Director Tomás Aragón on Aug. 5, though the state seal and California Governor Gavin Newsom’s name appear in the letterhead.

CHOMP President and CEO Dr. Steven Packer could not be reached for comment.

Monica Sciuto, assistant communications director at CHOMP did not respond directly to questions from The Epoch Times, and instead shared a series of recent press releases.

“Starting October 1, only vaccinated individuals will be permitted to work at all of our hospitals. Only those with a valid authorized religious or medical exemption may decline the vaccine. Our hospitals must test those with the rare exemption twice weekly,” one release stated.

“California is the first in the nation to mandate all health care workers statewide be vaccinated against COVID-19. Every hospital in Monterey County and their health care systems stand behind this mandate,” the release also stated.

But that’s not the case according to some staff members.

As of Sept. 9, three out of six patients receiving COVID-19 treatment at the hospital had been vaccinated, Sims said.

Currently, unvaccinated nurses at CHOMP must wear N95 respirator masks and submit to PCR tests twice weekly, while vaccinated nurses wear basic surgical masks and don’t have to be tested, said Sims, who has worked as a nurse in California for five years.

“Everyone who has submitted a religious exemption has been declined,” she said.

Sims is pregnant and is scheduled to go on maternity leave on Sept. 28. Though she had been given a deferral for the vaccination because of her pregnancy, the hospital recently revoked it, she said.

She predicted many nurses will either be fired or suspended if they refuse to comply with the vaccine mandates.

“There’s about to be a whole lot of staff shortages,” she said. “That’s for sure.”

“I don’t think it’s just going to stop with this one vaccine. We know that for a fact, because Pfizer has already come out with the boosters,” Sims said.

According to The Hill, the Biden administration has said it aims to start administering COVID-19 booster shots with Pfizer’s vaccine beginning Sept. 20.

“The available data make very clear that protection against SARS-CoV-2 infection begins to decrease over time following the initial doses of vaccination, and in association with the dominance of the Delta variant, we are starting to see evidence of reduced protection against mild and moderate disease,” White House health officials said in a statement last month.

Sims said the group has consulted an attorney and is considering legal action.

Amy Landry, who is still recovering from a severe case of COVID-19 from early January, told The Epoch Times she doesn’t want to get the vaccine because she already has antibodies and natural immunity.

“There’s no way” she could get one, she said. “My doctor said, ‘Absolutely not.’ I would have to go totally out of my hospital system that I work at to find another doctor to do that.”

Her request for a religious exemption was also denied.

“The people … on these review boards to review the medical exemptions or religious exemptions were not unbiased. They all worked for the hospital. So how is that an independent review board? It’s not,” she said.

Doctors aren’t prescribing drugs such as ivermectin or hydroxychloroquine, and nor are they writing medical exemptions, because they are afraid of repercussions, she said.

Landry came down with COVID-19 symptoms about five days after working a double shift on New Year’s Eve without an N95 respirator mask. She was working on the hospital’s COVID-19 floor, and one of her patients had a severe case and was placed on high-flow oxygen, she said.

At the time, the hospital was rationing N95 masks, Landry said.

“They hid the N95 masks. We had to go to the nursing office to get them … but you couldn’t get one unless your patient [met] specific criteria,” she said. “They told me that I didn’t need to wear an N95. Well, I knew I did, but I couldn’t get one. They would not give me one. They said this patient, according to our infectious disease doctor, did not require me to have an N95, so I took care of him for the whole night.”

She had also cared for the patient two days prior.

On Jan. 8, Landry was herself admitted to the hospital.

“I was right next door to the man that I took care of, that I know gave me COVID and I heard him die,” she said. “You can hear people when they’re struggling to breathe.”

While she was in the hospital, Landry was treated with Remdesivir.

When she was released, she was on oxygen for five months. “I couldn’t walk up my stairs for two of the five months. I now have an autoimmune disease,” she said.

Landry believes Remdesivir, which is used to treat Ebola patients, made her COVID symptoms worse. She is what the medical profession has called a “long-hauler,” because she’s taken months to recover.

“I believe that we have treatments out there that have been proven to work and we’re not making them accessible to people,” Landry said. “Ivermectin, even just zinc, vitamins and minerals, and hydroxychloroquine … are very cheap medications that are—or were at one point—easily accessible.”

Landry accused politicians and the mainstream media’s of pushing the idea that unvaccinated people are “dumb.”

“There’s a narrative out there that people who don’t want the vaccine are unintelligent. They are very intelligent people, and I would venture to say probably more intelligent at times than the ones … getting this vaccine, and we’re being shown as the dumb ones,” she said.

“That is so wrong because we’re doing so much research,” Landry said. “And, it’s getting harder to find the research. If you go on Google, it is almost impossible.”

Landry is frustrated with hospital policies that put stars of the badges of vaccinated employees, while their unvaccinated co-workers are forced to wear N95 masks.

“Where were the N95 masks when we needed them?” she said.

Patients have noticed some nurses have stars and others have masks and have asked why, she said. A few have complained about unvaccinated staff, Landry said.

But, ultimately, the N95 masks have become a way for those opposed to getting the vaccine to identify each other and unite, she said.

Raynald Adams, who works in the CHOMP laboratory processing specimen samples, told The Epoch Times, “We get as many if not more fully vaccinated patients with the Delta strain as we get unvaccinated patients.”

Based on what he’s seen in the hospital lab, Adams said there are more Pfizer-vaccinated patients who got the Delta variant than those who got the Moderna vaccine.

It doesn’t make sense that all health workers were considered heroes for working through the pandemic, but now some are seen as villains and are faced with being fired “because we don’t want to take a vaccine,” he said.

Adams said he had been dealing with the stigma of the missing star on his badge for years because he received a religious exemption for the flu shot, and the stigma has only gotten worse since the COVID-19 vaccine was mandated.

“I’ve been feeling that pressure for over eight years,” he said.

Adams said his religious exemption has been revoked for the COVID vaccine.

He said he is also displeased with President Joe Biden’s insinuation on Sept. 9. that 80 million unvaccinated Americans are to blame for the lingering pandemic.

Biden said, “We’ve been patient, but our patience is wearing thin, and your refusal has cost all of us.”

Biden also claimed that unvaccinated people are “crowding our hospitals.”

“We’re in a tough stretch,” he said. “This is not about freedom or personal choice.”

He contends the mandate violates his constitutional right to religious freedom and to choose whether he gets the vaccine or not. And, as “a combat veteran who has fought for this country,” Abrams said he doesn’t appreciate Biden trying to label him “a terrorist” for not submitting to a coercion.

“It is so far out of the picture and is so insulting,” he said.

Christy Kinkade, a clinical educator and ER nurse who has worked at CHOMP for 15 years, attended the protest.

“There was a lot of really positive energy, and it brought together people from really diverse backgrounds,” she told The Epoch Times. “We did not have just health care workers there. We had educators there. We had people in private businesses that are being mandated. We had folks just coming out to support the group. It was really great.”

The way CHOMP is handling the vaccine mandate, especially in the middle of a nursing and staffing shortage, is “going to hurt the community, more than help it,” Kinkade said.

Kinkade believes everyone has the right to make their own decision on the vaccine, and she has been denied a religious exemption.

“All of us have been here the last year-and-a-half,” she said. “We’ve been serving through the whole pandemic. We’ve been working long shifts, we’ve been taking care of the community, and now I feel like we’re being punished for our own choices.”

However, critics say the fully-approved Comirnaty vaccine is not yet available in the United States, and drug regulators have extended emergency use authorization for existing doses of the vaccine.

The Biden administration also claimed that Comirnaty is a “breakthrough” vaccine that has been “fully approved by the FDA.”

Meanwhile, Dr. Robert Malone, who was involved in key research in the field of mRNA vaccines, has accused Pfizer and BioNTech of playing a “bureaucratic kind of shell game, the likes of which I haven’t seen before.”

“Once again, the mainstream media has lied to you,” Malone said on Steve Bannon’s War Room on Aug. 24. “The press has just actually not done their work and figured out what’s going on here.”

“Much of what the mainstream concocts is a false reality disregarding any unbiased or true peer review science-based evidence or even logical thinking and is undeniably backed by big pharma and the corrupt entities we hear so much about, making decisions for us these days. Follow the money!” said Sims.

Sims said the Biden administration intends to “undermine those unvaccinated” who want to wait to take the vaccine until all the clinical trials are completed, which she acknowledged could take years.

According to Montage Health, the non-profit group that runs CHOMP, the hospital has more than 2,500 employees, 432 medical staff, and 390 volunteers.