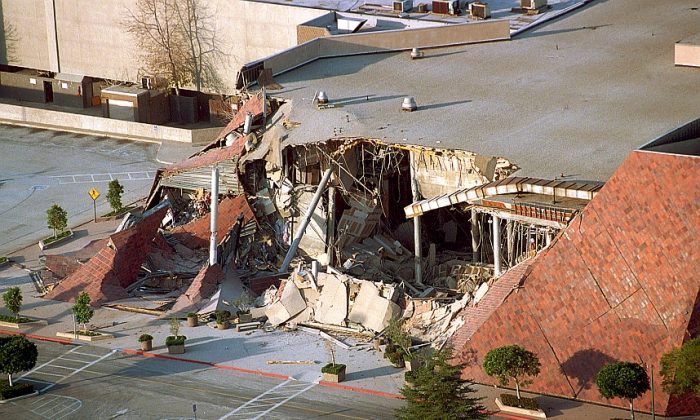 This Jan. 17, 1994 file photo shows a portion of a Bullock's department store that collapsed after the 6.7 magnitude Northridge earthquake. While the city of Los Angeles has made strides in retrofitting brick buildings, work remains to strengthen concrete buildings and housing with underground parking. (AP Photo/Reed Saxon)
US

LOS ANGELES—Following the magnitude 6.0 earthquake in Napa, California on Sunday, people in the rest of the state are looking at how prepared they are if a bigger one strikes.

“Modern building codes are actually very good for earthquake resistance. The problem is older buildings that were built prior to the existing codes,” said Robert Graves, the Southern California coordinator for the U.S. Geological Survey’s (USGS’s) Earthquake Hazards Program.

Earthquake retrofitting is very important for old brick buildings, concrete structures, and buildings with underground parking. However, retrofitting older buildings does not mean they would be brought up to current standards. The idea is simply to improve the safety of the buildings.

But retrofitting can be costly. According to Graves, the City of LA is currently developing a system that would either make retrofitting mandatory for certain types of older buildings or provide incentives to building owners.

“It really boils down to the economics,” said Graves. “And minimizing the immediate impacts on the building owners, with the idea that in the long run, there will be a tremendous financial savings when that large earthquake happens.”

USGS is also hoping to expand a prototype early warning system that was developed with Cal-Tech, the University of Washington, and the University of California, Berkeley. The system worked well during the Napa earthquake, giving ten seconds of warning to the Seismological Lab at UC Berkeley.

But the system is not yet available to the public. Graves said the project would cost $5–10 million per year to implement on a large scale, but the source of the funding is still not determined.

The last significant earthquake to hit Los Angeles was in 1994 in Northridge. With a magnitude of 6.7, it was five times stronger in shaking amplitude than the recent Napa earthquake and killed about 60 people.