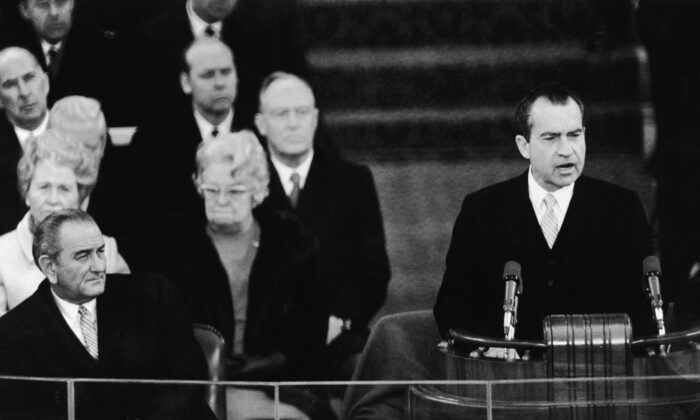 The “menace of inflation” is back.

Those who lived through the disastrous inflationary 1970s don’t want to relive them, yet that’s what some now fear. They worry the combination of Federal Reserve Bank’s “cheap money,” low interest rates, combined with unprecedented government spending will trigger 1970s inflation.

“The Great Inflation was one of the most turbulent economic periods of the twentieth century,” researchers at the Richmond Fed wrote in 2016.

In the worst of the Great Inflation, interest rates were historically high, over 20 percent.

Still, the economy today is not as bad as those numbers. But, critics say, inflation is creeping up.

The Federal Reserve Board Open Market Committee recently raised its annual inflation forecast from 3.4 percent to 4.2 percent for 2021. The committee said the rate would run a little above two percent through at least 2024.

Fed officials have said they will avoid a 1970s rehash.

A historian remembers those times. He says inflation has hardly been a factor for decades, but now it’s different.

“Today, they’re put on the gas jets with government spending. They are printing money that they don’t have; they are borrowing more and more,” says David Pietrusza, the author of numerous historical works, including “1920: The Year of Six Presidents.”

The 1970s was a difficult decade. Most Fed watchers agree monetary and fiscal policies, everything from paying for the War in Vietnam and the Great Society, triggered inflation.

Nixon, who in running big deficits re-defined himself as a Keynesian, was paying for the War in Vietnam and expanded social programs.

This government must spend big argument was recently made by the Biden administration. It has proposed record new welfare and infrastructure spending as a way of helping the nation recover from the effects of COVID lockdowns.

President Joe Biden, in a June 29 speech in La Crosse, Wisconsin, said his infrastructure package will help tens of millions of Americans.

“This deal,” Biden recently said, “isn’t just the sum of its parts. It’s a signal to ourselves, and to the world, that American democracy can come through and deliver for all its people.”

Both in the 1970s and today, large government deficits require increased money creation rates. So President Nixon decided in 1969 that he needed another central banker.

The new Federal Reserve chairman, Arthur Burns, a Nixon ally going back to the Eisenhower administration, was committed or pressured to keep interest rates low.

Nixon had refused to re-appoint the previous Fed chairman, William McChesney Martin. That’s because Nixon believed he lost the 1960 presidential election owing to McChesney’s tight money policies. Just before the 1960 election Burns warned candidate Nixon interest rates were too high. Burns wrote that “everything possible be done to avert this development by loosening up on credit and increasing spending for national security,” according to Nixon memoir, “Six Crises.”

Indeed, inflation became a big problem for all three 1970s presidents. They all tried various ineffective strategies to contain it. In March 1974, Cost of Living Council Director John Dunlop, said “we just don’t know how to control inflation.”

The problem of anticipating inflation, an economist wrote, was unprecedented.

“The 1970s are America’s only peacetime outburst of inflation. The 1970s was the only era in which business enterprise and financing transactions were also speculating on the future of monetary policy,” economist J. Bradford DeLong wrote in a NBER study.

“The sustained elevation of inflation for a decade has no parallel in the past century and concern about inflation was an important factor in nearly all business decisions,” DeLong added.

Nixon, according to several historical accounts, forced Burns to keep down interest rates.

“This is a standing vote of approval, in advance, for lower interest rates and more money,” said Nixon at Burns’ swearing in.

“I have very strong views, and I expect to present them to Mr. Burns. I respect his independence but I hope he will independently conclude that my views are the right ones,” Nixon said as quoted in the Kansas City Star of Feb. 1, 1970.

The stock market initially was not hurt by the spending and monetary policies of Nixon and Burns in 1971 and 1972. Nixon easily won a second term. Still, eventually the economy and the market crashed. In an 18-month period of 1973-1974, the stock market went down some 40 percent.

Joel Griffith, a Heritage Foundation researcher, sees similarities. He says the stock market, up some 30 percent since the COVID crisis began in 2020, has been pumped up by historically high deficits and low interest rates.

“These stock market values obviously haven’t been reflected in the economy, which has not grown by 30 percent over the past year,” Griffith argues.

What has been happening, Griffith adds, is huge government spending and easy money policies are “distorting” values. This distortion will eventually be felt in the stock market and the economy, he says, and it is very possible we could see more 1970s problems.

The Fed failed between 1969 and 1980. That’s when the inflation index varied. It was 5.4 percent at the beginning and 13.5 percent in 1980, according to a study by Edward Nelson of the Federal Reserve Bank of St. Louis titled “The Great Inflation of the 1970s: What Really Happened.”

Burns in his memoirs conceded mistakes but blamed them more on fiscal than monetary policy.

“We are a nation in a hurry for more and more of what we consider the good things in life,” wrote Arthur Burns in a speech titled “The Menace of Inflation.”

“I do not question that yearning. Properly directed, it can be a powerful force for human betterment. Difficulties arise, however, when people in general try to reach their goals by means of shortcuts; and that is what has happened.”

“We understand the difficulties that high inflation poses for individuals and families, particularly those with limited means to absorb higher prices for essentials such as food and transportation,” Powell said.

Still, while saying the inflationary spike is transitory, at a recent central bankers’ forum Powell added it is “frustrating to see the bottlenecks and supply chain problems not getting better—in fact, at the margin, apparently getting a little bit worse. And we see that continuing into next year probably and holding inflation up longer than we thought.”