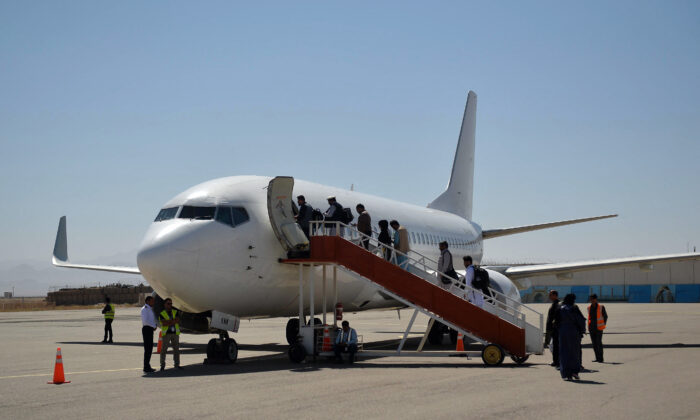 Passengers board a commercial aircraft bound to Kabul at Herat Airport in Afghanistan on Sept. 22, 2021. (Hoshang Hashimi/AFP via Getty Images)
Afghanistan

About 100 American citizens and legal permanent residents who wish to evacuate Afghanistan are still stuck in the country while waiting for a flight back to U.S.-held grounds, a senior State Department official announced on Monday.

The official, who briefed reporters on condition of anonymity, said they are working to get people safely out of the war-torn nation, but the Taliban’s “unpredictability” on who is allowed to leave is holding back the rescue operation.

“The biggest constraint to the departure of our citizens and others from Afghanistan, of course, remains the Taliban’s unpredictability regarding who is permitted to depart,” the official said, according to a State Department statement.

“The second big constraint is the absence of regular commercial air service to enable folks who wish to depart to do so in a predictable manner.”

The official also noted that the State Department is in “regular communication” with private groups chartering their own evacuation flights from the country.

“Our highest priority in Afghanistan, of course, remains helping those American citizens who wish to leave the country now to do so, and ensuring safe passage and freedom of movement,” the official said.

At least 85 American citizens and 79 lawful permanent residents have evacuated Afghanistan on sporadic flights with U.S. assistance since the last American troops withdrew from the country on President Joe Biden’s self-imposed Aug. 31 deadline.

Officials have struggled to provide an estimate of exactly how many American citizens and legal permanent residents still remain in Afghanistan, with numbers fluctuating.

Roughly 124,000 people were airlifted out of Kabul, the Afghan capital, since American troops fully withdrew the country following the Taliban’s takeover of the capital in late August.

Defense Secretary Lloyd Austin on Tuesday defended the Biden administration’s Aug. 31 deadline and withdrawal of American troops—a move that has faced intense criticism from both Republicans and Democrats.

“My judgment remains that extending beyond the end of August would have greatly imperiled our people and our mission,” Austin said during his first congressional testimony on the tumultuous U.S. withdrawal from Afghanistan.

“Staying longer would have made it even more dangerous for our people and would not have significantly changed the number of evacuees we could get out,” he said.

Republicans have said Biden’s decision to pull all American troops out of Afghanistan by Aug. 31 left the United States more vulnerable to terrorism. They are also demanding more details on the suicide bombing in Kabul that killed 13 American service members in the final days of the withdrawal.

Democrats have sought to push much of the blame for the unpopular fiasco onto the Trump-era deal with the Taliban, although some Democrats have also been critical of the Biden administration’s handling of the situation and the rapid collapse of the previous Afghan government.