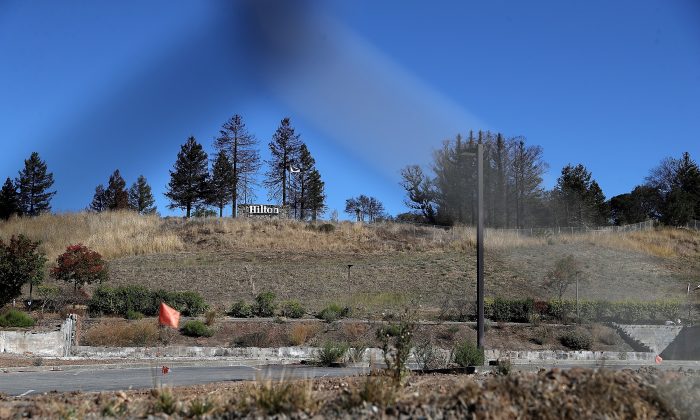 A Hilton sign remains at the site of the Hilton Sonoma Wine Country that was destroyed by the Tubbs Fire one year earlier in Santa Rosa, California, on Oct. 8, 2018. (Justin Sullivan/Getty Images)
Northern California

Sonoma County residents gathered in Courthouse Square on Oct. 8, to observe the first anniversary of the Sonoma Complex fires that killed 24 county residents and 20 more in Napa and Mendocino counties.

Adults and children made drawings and wrote words in chalk on the sidewalk and the paved center of the square that recalled the horror of the firestorm the night of Oct. 8-9 and the grief of losing homes and loved ones and the hope of healing and recovery.

Among the artwork were the words, “Be strong and courageous. Do not be afraid or discouraged,” “Hold On, Pain Ends,” “Water is Life,” and “Enjoy the Little Things.”

She told the crowd of about 200 that the first responders “are ingrained in our cellular beings. So many uncounted lives were saved.”

The Press Democrat columnist Chris Smith said, “It was a year that went quickly, but for many it was the slowest year ever.”
He asked everyone to observe a moment of silence on Oct. 9.

Elected officials from Santa Rosa, Sonoma County, and the state stood silently on a stage, choosing to let the moment speak for itself.

“I’m deeply impressed with the response and the amazing determination and action of nurses, teachers, students, and emergency personnel,” Ghilarducci said.”

The first days were critically important to our community and the healing process. Tonight we remember those we lost and the lives that have been changed,” he said.

Sonoma County Poet Laureate Maya Khosla read three short poems inspired by those who were lost and those who after the fires thrived and gained strength.

One of the poems, “Blue Oak” was based on scenes from Pepperwood Preserve in Santa Rosa that sustained extensive fire damage.

Sebastopol resident Nicole Barden said Khosla’s words reflected the heart of the community and the tenor of the event itself.

“The whole vibe was art and poetry. It wasn’t just talking,” Barden said.

Santa Rosa resident Celeste Dodge said, “For me it was like a salve to get the community together.”

The ceremony ended with the Santa Rosa Fire Department’s Honor Guard ringing a silver bell 44 times in memory of the residents in the North Bay that died in the fires.