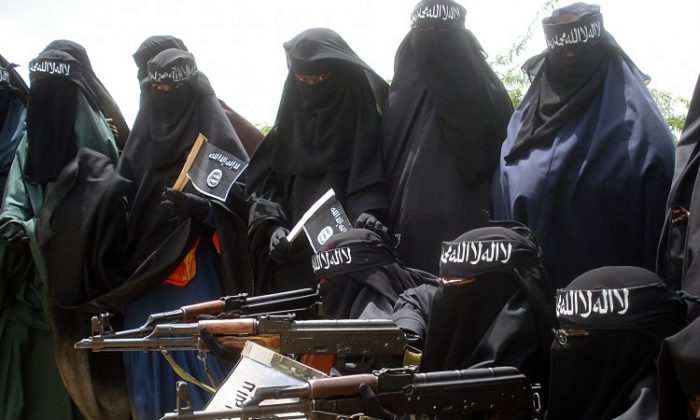 Somali women carry weapons during a demonstration organized by the islamist Al-Shabaab group which is fighting the Somali government in Suqa Holaha neighborhood of Mogadishu in 2010. (Abdurashid Abikar/AFP/Getty Images)
Africa

Somalia’s transitional government on Monday asked the United Nations to remove a two-decade-old arms embargo on the impoverished East African country, to deal with the threat posed by the recent union of al-Qaeda and the homegrown group, al-Shabab.

“We … believe that their union (al-Shabab and al-Qaeda) will increase the insecurity in Somalia, East Africa, and the rest of the world and that Somalia risks becoming an al-Qaeda base in East Africa,” the country’s information ministry told Reuters.

As a result, Somalia is asking the U.N. and the international community to “lift the arms embargo on Somalia so that it could defend the country” as well as “increase and reinforce the Somali National Army,” according to the news agency.

Different parts of Somalia, which has been without a centralized government since 1991, are ruled by several different groups. Al-Shabab mainly controls the southern portion of the country.

On Friday, al-Qaeda and al-Shabab announced that they would join forces and celebrated their union across Somalia on Monday. “The unification of Al-Shabab with al-Qaeda breaks the hearts of the enemy,” al-Shabab spokesperson Sheikh Ali Mohamud Rage told a group of several hundred, according to AFP.

“Businesses were shut after Shabab fighters in cars with loudspeakers ordered people to attend the demonstration,” an eyewitness, Mohamed Sufi, told the news agency on Monday about rallies staged near Mogadishu.

The U.N. placed an arms embargo on Somalia in 1992, following a coup that deposed longtime military strongman Mohamed Siad Barre, when infighting broke out.