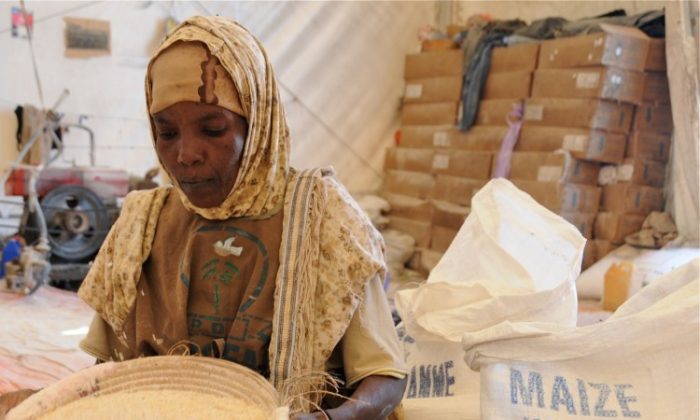 Somalia—a country suffering from two decades of civil war, no central government, and the scourge of piracy—has also become the emblem of overwhelming hunger, complete with images of malnourished children with sad eyes and bulging bellies.

Earlier this month, the United Nations deemed the Somali famine that had first been declared last July, over. The famine claimed between 50,000 and 100,000 lives, half of them children.

Due to a massive humanitarian injection of funds and supplies and favorable weather forecasts, the situation has improved—but not excessively.

According to the Food and Agriculture Organization, out of the 4 million people facing starvation at the start of the famine, there are now 2.51 million. Nonetheless, Somalia still has 31 percent of its population—more than any other country in the world—who require humanitarian assistance, at least until June, when the next harvest is expected, assuming healthy rains in April and May.

Humanitarian aid will also be critical during April and May, known as the hunger gap—or the period between harvests. During this time, cereals stocks will become depleted in poorer households in the regions of Bay and Lower Shabelle.

Somalis are even more vulnerable to political instability, which could toss the country into catastrophe again, regardless of the bounty of the harvest.

Food insecurity elements are terrorist organization al-Shabab, escalating military conflicts with Kenya and Ethiopia, and thousands of internally displaced fleeing for their lives. Experts warn that without commitment of the relief organizations and political actors and generous support from donors, the current crisis has all chances to revert to catastrophe again.

Aid organizations say their success in Somalia proves the value of aid and hope donors realize it as well and not abandon Somalia now just because the famine is “over.”

“This shows that with large-scale interventions we can make a difference and when people provide money they can see results,” said Grainne Moloney, chief technical adviser at the Food Security and Nutrition Analysis Unit (FSNAU) of the FAO Somalia, via email.

Famine is a technical term to define the most severe state of food insecurity. It is comprised of three elements: malnutrition affects over 30 percent of population; crude mortality rates exceed two deaths per 10,000 people per day; and at least 20 percent of the population cannot eat enough to meet 50 percent of their needs.

The U.N. has five levels of nutrition and food insecurity severity. While famine is the most severe, Somalia only improved by one level to humanitarian emergency. The remaining ones are crisis, stressed, and not acute crisis.

Last December the U.N. appealed for $1.5 billion in 2012 to build resilience to future drought and other shocks, and to reduce Somalis’ dependency on aid.

“Without continued and generous support from the international community, these gains could be reversed,” warned Roberta Russo, with U.N. OCHA Somalia, in an email from Nairobi.

Right after the U.N. declared the famine over, Oxfam appealed to the international community not to turn its back on Somalia.

“We are seriously concerned that if people do not have the security to tend their crops and animals, or the freedom to access clean water and food in the markets, the humanitarian situation will deteriorate once again,” said Oxfam boss in Somalia Senait Gebregziabher.

“A doctor cannot just walk away if the patient is seriously sick—which in my analysis is the situation,” says Nick Archer, senior director of Disaster Response & Security at Seattle-based World Concern. “The patient might no longer be in the critical care unit, but still be very sick.”

Apart from continued funding, political will in Somalia will be needed to help guarantee humanitarian organizations can reach those in need. Guaranteeing this has been a chronic sticking point.

At the end of January, al-Shabab banned food supplies from the Red Cross in south of Somalia, and the organization is still negotiating to resolve the situation.

“We remain concerned about the population because the mortality and malnutrition rates are still high,” said Jean-Yves Clémenzo, public relations officer for Eastern Africa of the International Committee of the Red Cross.

Last week, IRIN news agency reported that humanitarian organizations are withdrawing from South Galkayo in central Somalia’s self-declared autonomous state of Galmudug, due to security issues. This leaves those displaced by drought and military conflicts with even less assistance.

In October 2011 two aid workers from the Danish Demining Group were kidnapped in South Galkayo, and on Jan. 21, am American reporter was kidnapped.

But despite all challenges, Somalia needs long-term assistance. Because the country is so rain-dependent, its survival can be at stake any given season. What’s needed most is investment in agriculture and human resources.

“The region will need long-term help … to find ways to improve agricultural production, raise incomes, and improve livelihoods,” wrote Danielle Nierenberg, director of the project Nourishing the Planet of the Worldwatch Institute, via email.

“Without these things, the country will not be able to feed itself and thousands more people will be hungry.”