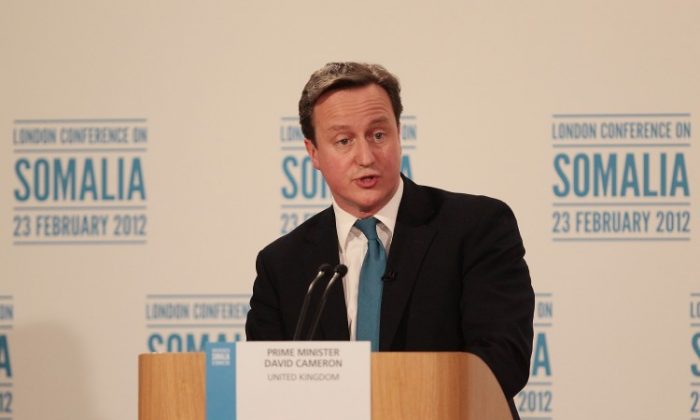 ‘Somalia Is Within Reach of a New Political Process’ says Cameron

The future of Somalia was the topic of conversation at a conference held in London today.

UK Prime Minister David Cameron welcomed world influencials such as US Secretary of State Hillary Clinton and UN Chief Ban Ki-moon to the event that focused on attaining peace and elimination of piracy and terrorism in that region of Africa.

In his speech delivered at the conference, Prime Minister Cameron said: “This is not just the largest gathering of countries and organisations that have ever come together to discuss the issues in Somalia, it’s also the most influential … and most importantly of all, Somali delegations – representing almost every region of Somalia not under terrorist control.”

On why the conference was being held, Prime Minister Cameron said that the terrible scenes from the famine in Somalia last year were ‘truly heart-breaking’, and no country or people should ever have to endure such hardship in today’s world. Mr Cameron added that the problems in Somalia affect us all. “In a country where there is no hope, chaos, violence and terrorism thrive. Pirates are disrupting vital trade routes and kidnapping tourists,” said Mr Cameron.

“Today we have an unprecedented opportunity to change that. There is a real momentum right now. International aid has pulled Somalia back from the brink of the humanitarian crisis,” added Mr Cameron.

The UK Prime Minister believes that momentum is gathering with the steps the Somalis themselves are taking to ensure there is ‘proper representative and accountable government.’

Objectives of the Conference

Mr Cameron said that there were three main objectives of the conference.

Firstly, to help build security through a strengthened African Union peacekeeping operation. Secondly, getting humanitarian aid and development support where it is needed. And thirdly, ensuring that Somali efforts to create a representative government are backed by real international commitment.

In an interview with the Guardian newspaper in the UK, former United Nations High Commissioner for Human Rights, Mary Robinson expressed her concerns that ordinary Somalis should be the focus of the London talks.

“The Somali people are incredibly resilient and have always managed to overcome enormously difficult conditions to survive and look after their families. The current crisis, however, is overwhelming and has completely destroyed their assets and livelihoods. It will take many years and the international community’s commitment to ensure they can rebuild their lives,” Mrs Robinson told the Guardian.

“The safety of Somalia civilians should be paramount … all policies decided in London must be in the interest of the Somali civilians,” said Mrs Robinson in the same interview.