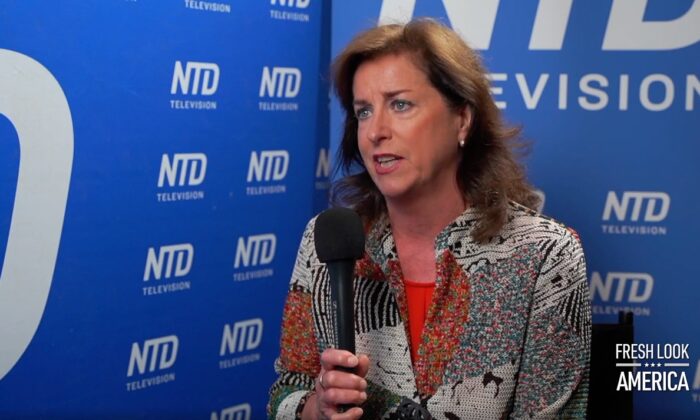 Chairman of a libertarian think tank, Mary Theroux is host of the documentary, Beyond Homelessness: Finding Hope, (interview/screenshot via Epoch TV )
Social Issues

Beyond Homelessness: Finding Hope, is a documentary about the national homelessness crisis and its possible solutions. Hosted by Mary Theroux, chairman and CEO of a California-based libertarian think tank, the film describes the growing homelessness problem in San Francisco and compares it with cities that have found large-scale solutions.

Theroux says the way to end homelessness is not the top-down government approach, but the traditional American way of an entire community working together.

Her documentary team found that while most localities have small programs that work well, San Antonio’s Haven for Hope in Texas was the only large-scale program successfully fighting homelessness because it was modeled after a whole-of-community approach.

“Most importantly, it’s done it through a very Tocquevillian, traditional American model where everybody in the community came together … [and] formed a task force,” to strategize about the comprehensive needs of the population, including interviewing the homeless to find out what they were looking for, Theroux said in a recent interview with NTD’s Fresh Look America.

“But more importantly, provide[ing] transformational care, residential transformational services, for people to take themselves from the street to achieve their full potential, and live rich lives.”

The Haven for Hope has 140 partners working in sync on its campus, to provide customized services: “… they deal with people on an individualized basis. So you come in, and they say, tell us your story, and then what’s standing in your way of moving on with your life, and they address that,” said Theroux.

Unlike San Francisco, “where you stick somebody in housing, not able to live successfully that way, and they end up just back on the streets over and over and over again,” at Haven for Hope “what they’re being given upfront is unconditional love and acceptance,” said Theroux.

However, Theroux said her findings show that homelessness is on the rise nationally, and is worse in many major cities because of a U.S. Housing and Urban Development (HUD) policy shift that started under President George W. Bush and was enhanced under the Barack Obama administration.

The HUD program, called Housing First, shifted the focus from shelters to permanent housing, which is extraordinarily expensive and takes a long time to build, leaving very little money for other more important resources, such as mental health, addiction, and physical health services that the homeless need, said Theroux.

“[The government] made the streets the waiting room in the meantime,” and “you never address the root causes [that] put someone into homelessness in the first place.”

Even those who do get into permanent housing often do not have the skills to live independently and end up back on the street, or dead from a drug overdose, she said.

“It’s a very bad solution, and we have to reverse it.”

Meanwhile, California Gov. Gavin Newsom said his administration has put more money—over $12 billion—into fighting homelessness than any other governor before him. His administration’s 2022 effort to end homelessness includes increasing funding for rapid housing that includes “tiny homes” and Project Homekey.

“We’re doubling down on our nation-leading efforts to tackle the homeless crisis,” Newsom said at a May 2022 press conference about his proposed budget, where he also announced additional funding for Homekey, saying the program has surpassed 10,000 units funded since its inception less than two years ago.

“You have to address what put them into homelessness, or what’s keeping them in homelessness, in order to resolve it, and … four walls don’t do that,” said Theroux. “You’re just taking a homeless person and putting them inside, so they remain culturally homeless, and you’re not helping them.”

Childhood trauma, mental health disorders, and economic downturn are the leading causes of homelessness, she said. While many are already addicts, many others become addicted as a way to escape the misery of homelessness.

And instead of making it easier for them, which city officials call “harm reduction,” Theroux said. “We really need to be providing people with the resources to escape that slavery and achieve their full potentials as human beings.”

While Theroux believes drug prohibition does not work, neither does she believe in giving ready access to drugs for harm reduction measures—such as providing syringes, like they do in San Francisco. She said educating people, especially youth, about the reality of drug use, is the key to decreasing addiction.

“We have to maintain or return our streets to civil order, and deal with drug use through education and treatment, and helping people understand that it’s not a good choice. And if you’re addicted, there’s a way to not become addicted,” said Theroux.

“Concurrent with that, we have to be letting kids know that there’s a purpose to life, and we’ve taken a lot of that away. We’re telling kids ‘no, there’s no purpose.’”

The other, more important, factor, she said, is to empower families, who can help instill a sense of belonging and purpose.

“We have a war on children in this country … We’re trying to destroy childhood. We have families that are in deep distress.”

While making the documentary, Theroux said she met many people who had experienced unimaginable childhood trauma and broken family systems, including a woman who said that, as a homeless young adult, she had to sleep under cars to escape predators.

Too Much Government Control

In California—one of the top six worst states for homelessness—zoning laws, climate change policies, and government control of building housing units, have made building homes extremely expensive and contributed to the increase of homelessness.

California is the only state where over 70 percent of the homeless population is without shelter. At 113,660 people, that makes the Golden State home to more than half of all unsheltered people in our nation.

“The 2021-22 budget provides $10.7 billion ($5 billion General Fund) to 50 housing and homelessness-related programs across 15 state entities,” according to the California state legislature spending plan. In the 2019 budget, the governor earmarked $1 billion for homelessness and close to $2 billion for housing.

Clearly, the billions allotted to the crisis have not helped reduce homelessness in that state’s major cities.

“It’s central planning,” said Theroux. “We saw it in all the communist countries and socialist countries, when it’s centrally planned. It’s very expensive, and it takes a long time, and it’s not very good.”

In Texas, homelessness in January 2020 was estimated at 27,229 people and, according to 2018 statistics, 54 percent of them were unsheltered. According to the Texas Tribune, the state legislature allocated $25 million for homelessness in 2019.

The reason San Antonio’s Haven for Hope is successful is because it brings the business and the nonprofit community, the police, fire department, and city government together to provide all of the services people need to end the cycle of homelessness, said Theroux.

The San Antonio community is invested in the Haven for Hope because they know it improves lives, and people want to help so it sets up a “virtuous cycle,” said Theroux. While filming there, she saw how the larger community responded to a call for help to prepare for winter.

“I watched the line of cars coming up with new sleeping bags, new coats, new gloves, whatever, just an outpouring of support and involvement.”

Theroux believes in order to replicate the Haven for Hope on a national scale, or in other cities, leaders will have to reach across political lines, as they did in San Antonio. There, despite their differences, a Democratic mayor and Republican businessman worked together to find a lasting solution.

“The important thing about volunteering, about working with people who are different from you is that you do learn that ‘Nope, we’re all the same.’ Underneath it all, we’re all exactly the same, and we have to regain that,” said Theroux.

Although the left and the right are divided on many political and social issues, their dissatisfaction with the government is bringing the two sides together, which Theroux sees as crucial to combating the homelessness-addiction crisis.