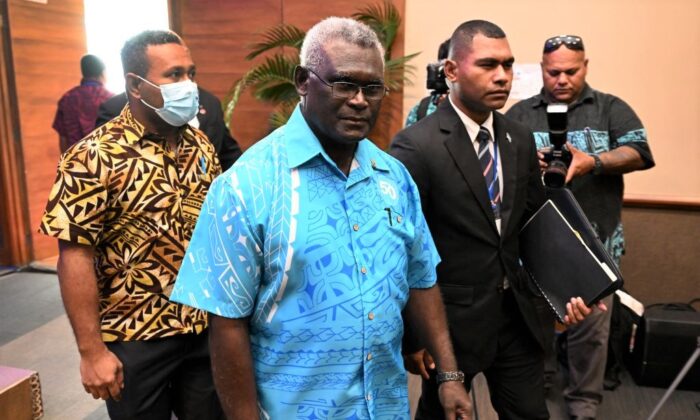 Solomon Islands Prime Minister Manasseh Sogavare has assured Australian Pacific Minister Pat Conroy that his attempt to delay the country’s next election will be a “one-off.”

The move comes after experts warned that Sogavare—who has cultivated deep ties with Beijing—could be emboldened to tighten control over the Pacific nation, a key goal of the Chinese Communist Party in the region.

Conroy told the Australian Broadcasting Corporation that the Albanese government welcomes “the assurance from the prime minister and language of the bill that ensures if this is passed, it will be a one-off and its schedule for elections returns to the normal four-year cycle.”

“We believe that having regular election cycles is a key aspect of democratic norms and values which we share across the region,” he said on Aug. 10.

On Aug. 8, the Sogavare government submitted the Constitution (Amendment) Bill 2022 to Parliament, which aims to delay the nation’s elections by six months until Dec. 31, 2023. Originally Parliament was supposed to be dissolved in May 2023 with the election to be held within four months of dissolution.

The prime minister has said the decision to try delay the election was due to a lack of resources to run the election and host the upcoming Pacific Games in November 2023 at the same time. Australia has contributed SB$100 million (US$12.13 million) to the Games.

“PM Soga has submitted the Constitution Amendment Bill to postpone dissolution of the 11th Parl. I encourage citizens to use the Bills Committee process to air their views,” he wrote on Twitter on Aug. 9.

The move to change the Constitution comes just days after Prime Minister Sogavare forced the national radio broadcaster, Solomon Islands Broadcasting Corporation, to self-censor content that was critical of his government.

Meanwhile, Pacific Minister Conroy would not be drawn on whether the Solomon Islands government could trigger a recently signed security deal with Beijing to mobilise Chinese police or security forces to deal with internal unrest.

“I had some very fruitful discussions with both the prime minister and Police Minister Anthony Veke where they assured us that if there are any gaps in the Solomon Islands security needs, they will come to Australia first to fill them,” he said.

“For example, we’re building border outposts in both the western and eastern borders to support their patrol boat and police activities. We’re supporting other activities to increase training capacity within the Royal Solomon Islands Police Force.”

In March, Sogavare signed the contentious pact with Beijing that will pave the way for the Chinese Communist Party (CCP) to station troops, weapons, and naval ships in the region—just 1,700 kilometres from Australia’s northern city of Cairns.

The steady erosion of the Solomon Islands’ democratic institutions comes as Sogavare tightens relations with Beijing and moves to solidify his power—he faces a strong chance of losing the next election.

It is also part of a wider trend in the region where pro-Beijing Pacific governments have steadily weakened their democracies. In Vanuatu, Prime Minister Bob Loughman attempted to change the Constitution to extend parliamentary term limits and allow foreign nationals to hold office—there are a high number of Chinese nationals in the country.

However, the vote failed after opposing MPs simply did not show up, which meant the Parliament did not have a quorum to meet.

Meanwhile, the Kingdom of Tonga is grappling with corruption issues that saw three MPs removed from Parliament for bribing voters.

“It’s about accreting political power and influence throughout the world,” he told the Argus Americas Crude Summit 2022 in late January 2022.