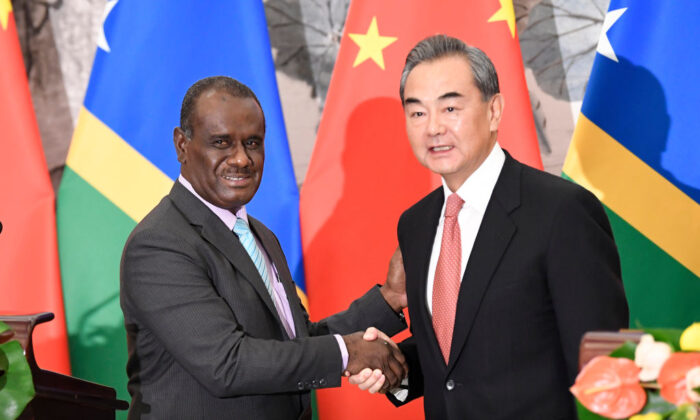 China is considering a proposal to set up a police training center in the Solomon Islands, Foreign Minister Jeremiah Manele said on Thursday, as Beijing seeks to bring their bilateral ties to “a higher level.”

Manele made the remarks during a joint press conference with his Chinese counterpart Wang Yi, who was on a 10-day trip to eight Pacific Island nations.

The Media Association of Solomon Islands (MASI) boycotted the press conference because they were only permitted to pose one question to Manele, while Wang would only respond to queries from Chinese reporters. The media of the democratic country objected to a foreign country restricting their ability to report on the event.

“China will further consider a proposal for a police training center and support towards police infrastructure and assets, given the country’s fragile security environment,” Manele was quoted as saying by ABC News.

The two countries formalized “a number of development cooperation frameworks” during their meeting, including a civil aviation agreement that will provide the groundwork for the airlines of both nations to open air routes.

“The two states initialed a civil aviation agreement. This will allow the aviation industry to do business with China and open up tourism and business market,” reported the Solomon Islands Government website.

According to a statement issued by the Samoan government, China and Samoa signed an agreement to build a fingerprint laboratory in addition to the previously announced police academy in the country.

The Solomon Islands signed a security deal with Beijing last month, which other nations feared would allow China to establish a military base 1,700 kilometers off the Australian coast and destabilize the Indo-Pacific region.

But Wang dismissed the speculation, saying that China has no intention of establishing military bases in the Pacific Islands nation.

“Any smears and attacks on China-Solomon Islands normal security cooperation will be a dead end and any interference and sabotage will be doomed to failure,” he said in a statement.

A draft communique of the China-Pacific Island Countries Common Development Vision and a five-year action plan, leaked to Reuters, has been circulated to the leaders of 10 Pacific nations, prior to the Chinese foreign minister’s tour to eight nations in the region.

U.S. State Department spokesperson Ned Price said on Wednesday that Washington was aware of China’s plan to have “a range of agreements” with Pacific Islands nations and is concerned that the accords were negotiated in “a rushed, non-transparent process.”

Price claimed that the security agreements were conducted with “little regional consultation, provoking public concern not only in the United States but across the Indo-Pacific region.”

“We don’t believe that importing security forces from [China] and their methods will help any Pacific Island country; on the other hand, doing so could only seek to fuel regional and international tensions and increase concerns over Beijing’s expansion of internal, of its internal security apparatus to the Pacific,” he said.