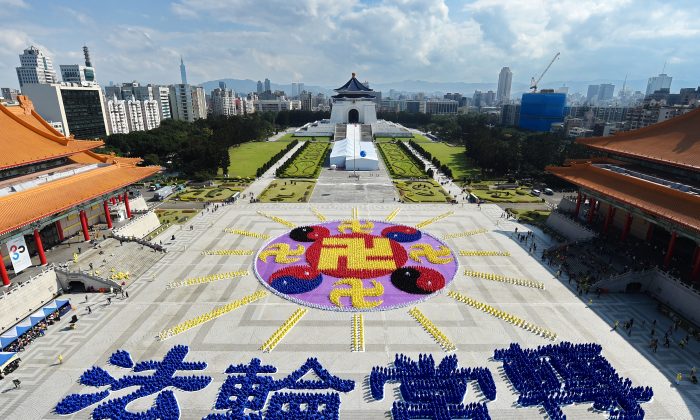 The Falun is the symbol of Falun Gong, also known as Falun Dafa, a Chinese spiritual discipline for improving the body and mind. Falun Gong includes five meditative exercises and moral teachings based on the principles of truthfulness, compassion, and tolerance.

Falun Gong practitioner Wu Qing-xiang, who has participated in designing formations for the past 16 years, explained, “The Falun emblem consists of a large srivatsa symbol in the center, four small srivatsa symbols, and four Taiji symbols.”

The Srivatsa, commonly called the swastika, is an ancient Buddhist symbol, and the Taiji is the Daoist symbol of yin and yang. The four Chinese characters under the Falun emblem are “Fa Lun Chang Zhuan,” which can be translated as “Falun rotates continuously.”

Wu said formations are generally used to appeal about environmental issues, but actually they are an art that can express great connotations. The formations created by Falun Gong practitioners over the years have been large in scale.

Wu said that the Chiang Kai-shek Memorial Hall is a famous tourist attraction, and space is needed for the public and visitors to walk, so the formation had to be limited to 90 meters long and 90 meters wide.

This year’s difficulty lay in the large size of the Falun emblem, which had a diameter of 55.3 meters, and the many strokes in the four Chinese characters, Wu said. The full cooperation of 6,300 Falun Gong practitioners was required to achieve this magnificent scene, he said.

Wu added that everybody feels the world is chaotic, people don’t see hope, and many people are busy their entire lives but never know the meaning of life. He said that in Falun Dafa, the goal of truthfulness, compassion, and tolerance is clear, and if one simply strives toward this goal, one will not feel confused or disoriented.

He said that the 16 golden rays around the Falun emblem symbolize Buddha-light illuminating the world. “We hope that people will follow virtue, and the formation has sent peaceful, bright, and positive energy to society.”

The director of the Taiwan Falun Dafa Association, Chang Jin-hua, said hundreds of thousands of people practice Falun Gong in Taiwan. Over 1,000 exercise sites can be found throughout Taiwan, and the number of practitioners in Taiwan is second only to the number in mainland China.

Though Falun Gong is welcomed in countries around the world, it has been severely persecuted in China since 1999. The Chinese Communist Party (CCP) has imprisoned, tortured, and killed thousands of Falun Gong practitioners for their beliefs.

Chang said terrorism is destructive, including the CCP’s killing prisoners of conscience by organ harvesting, which is known as an unprecedented crime on this planet. In addition, she said, human beings’ greed is destroying the natural environment, resulting in all kinds of disasters.

She said the world needs the universal values of truthfulness, compassion, and tolerance. If people treated others with integrity, kindness, and tolerance, the world would remain peaceful, and terrorism would not stand a chance, Chang said.

Theresa Chu, spokesperson of a Taiwan Falun Gong human rights lawyer group, said a formation participated in by thousands of Falun Gong practitioners is rarely seen in the world, and this solemn and grand activity also attracted many overseas practitioners to come to Taiwan.

She said that regardless of ethnic, national, or cultural background, together practitioners spread the blessings and peace of truthfulness, compassion, and tolerance. This is what people need the most in this turbulent world, she said.

Mr. Li, a tourist from Tianjin China, was visiting Taiwan for the first time. He and his fellow tourists were amazed to see so many practitioners making a formation. He said the scene was magnificent and shocking.

The tour guide then told Mr. Li that Falun Gong practitioners are kind, and that unlike China, there is freedom in belief in Taiwan.

After the formation, practitioners quickly cleaned up the signs marking the ground, formed lines according to the colors of their clothes, and started practicing the Falun Gong exercises.

At the end, 6,300 practitioners spoke together to wish Mr. Li Hongzhi, the founder of Falun Gong, a Happy New Year.