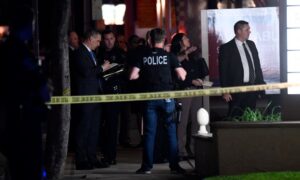 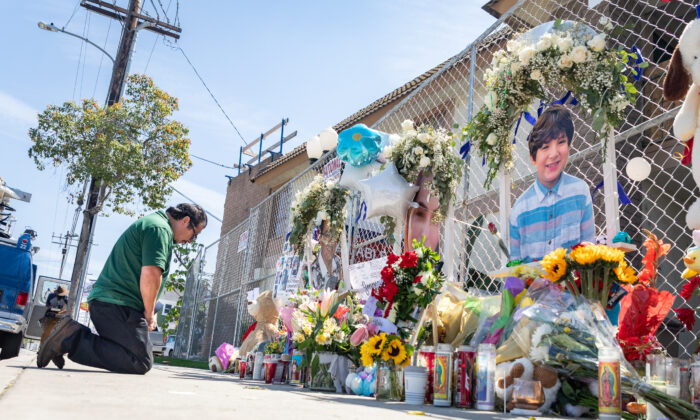 A man prays and mourns in Orange, Calif., on April 5 next to a memorial set up in front of a business building where four people were killed on March 31, 2021. (John Fredricks/The Epoch Times)
Southern California

SANTA ANA—The only survivor of the March 31 mass shooting in Orange has been released from the hospital to heal at home and mourn the deaths of a son and daughter who were among four people killed in the rampage.

Blanca Ismeralda Tamayo was released from UCI Medical Center on May 5, two bullets still lodged in her head, the Orange County Register reported.

Tamayo is recovering from wounds she suffered in the shooting at the real estate office where she worked. Among the fatally wounded victims were her 9-year-old son, Matthew Farias, and her 28-year-old daughter, Jenevieve Raygoza, who was herself a mother of two young children.

After Tamayo exited the hospital, wearing a T-shirt in memory of Matthew, she clutched at her chest and wept when asked about the boy who reportedly died as she tried to shield him from the gunman.

In the days after the shooting, Tamayo’s survival was very much in doubt. She spent days unconscious, her body functioning with the assistance of machines.

Dr. Michael Lekawa, one of the University of California–Irvine Health trauma surgeons who treated Tamayo, said on May 5 that such wounds are difficult to survive.

“This is a great outcome,” Lekawa said. “I think we can only expect to see more and more improvements as time goes on. I think she’s going to do very well.”

Tamayo left the hospital wearing a protective helmet and bearing a scar on the right side of her face. She spoke little, mostly to thank medical staff, and avoided talking about the shooting that changed her life.

Sometime after 5 p.m. on the afternoon of March 31, a gunman arrived at Unified Homes real estate office in Orange armed with a semi-automatic handgun, ammunition, pepper spray, and handcuffs, and opened fire.

In addition to Tamayo’s son Matthew, those killed were the company’s owner, Luis Tovar, 50; Raygoza, who was Tamayo’s daughter with Tovar; and another employee at the office, 58-year-old Leticia Solis Guzman.

Tamayo, a Santa Ana resident, also worked at the real estate firm, which specializes in mobile homes. That day, she had brought Matthew to the office.

The man charged with the shootings is Aminadab Gaxiola Gonzalez, 44, the husband or ex-husband of a former employee at the real estate firm.

The suspect’s attorneys have said Gonzalez—who was shot in the head by a police officer during a gun battle—has been unable to communicate with them.

On May 5, Assistant Public Defender Ken Morrison told Orange County Superior Court Judge Cheri Pham that “As of today, he remains the same as he has for some time.”

Authorities have not released additional details about the investigation, and have not discussed any suspected motive.