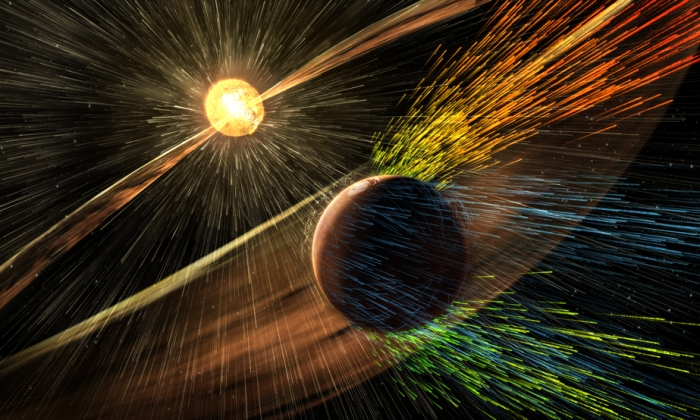 Particles from the upper atmosphere of Mars are escaping into outer space as a result of solar winds originating from the sun, according to data gathered from NASA’s Mars Atmosphere and Volatile Evolution (MAVEN) spacecraft.

Solar winds, which are streams of protons and electrons that flow from the sun at speeds of around 2 million miles per hour, create electric fields in the Martian atmosphere, accelerating gas atoms and shooting them into outer space.

The process is greatly amplified during solar storms, which the MAVEN spacecraft had an opportunity to observe last March. The data shows that solar winds strip away around a quarter of a pound of gas from Mars’s atmosphere every second.

NASA researchers speculate that the loss of atmospheric particles from solar winds is what transformed Mars’s water-rich landscape into the dry, harsh terrain that exists today. The red planet’s atmosphere is so thin that it’s difficult for water to stay in a liquid state, but its river-carved valleys and mineral deposits suggest that water was once abundant enough to cover much of the planet.

“Mars appears to have had a thick atmosphere warm enough to support liquid water, which is a key ingredient and medium for life as we currently know it,” John Grunsfeld, administrator for the NASA Science Mission Directorate, said in a statement.

“Learning what can cause changes to a planet’s environment from one that could host microbes at the surface to one that doesn’t is important to know, and is a key question that is being addressed in NASA’s journey to Mars,” he said.

The loss of the Mars atmosphere began more than 4 billion years ago, and lasted for 500 million years, NASA researchers said in a news conference on Thursday, Nov. 5.

The data from MAVEN provides an answer to a long-standing question about what happened to the large amounts CO2 and water on Mars. Mars was suspected to have had large amounts of water and an atmosphere with greenhouse gas, but evidence of what happened hasn’t been found in probes of the planet’s surface.

The MAVEN was launched in November 2013 and entered the Martian orbit in September 2014, armed with a suite of instruments designed to probe the planet’s atmosphere. Of critical importance is the magnetometer, which scouts for the patches of magnetic fields, or magnetospheres, that can still be found on Mars.

Unlike the Earth, which is covered by a global magnetosphere, only patches remain on Mars’s crust. Magnetospheres offer a shield against solar winds, and mapping these pockets of protection was key to measuring how effective solar winds were at dissolving the Martian atmosphere.

The data also has uses beyond delving into the planet’s history, such as where astronauts should, and shouldn’t go in a future Mars mission.

“You can figure out what dosage of radiation astronauts would be getting as they set up shop on the surface. You don’t want to send astronauts to certain death without exploring the risks,” Stephen Bougher, a MAVEN co-investigator, told Wired.