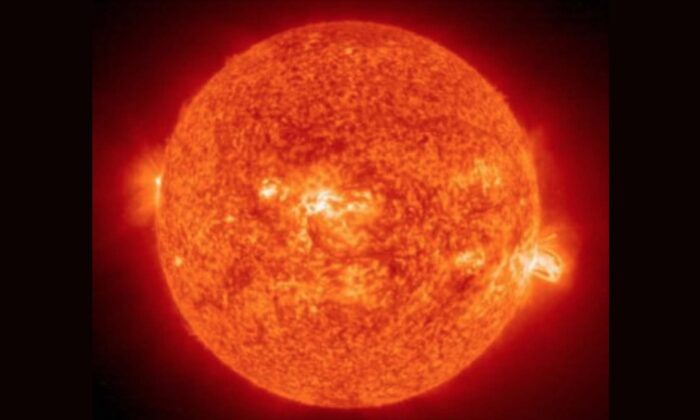 Something is happening to the sun. One of the regions of the solar atmosphere currently exhibiting sunspots caught the attention of observatories on July 11, when there was a sudden increase in ultraviolet and X-ray brightness. The next ones to notice were the amateur radio communities on either side of the Pacific Ocean, when their communications were briefly interrupted.

A solar flare—the emission of electromagnetic radiation and energetic particles located in a small region of the solar atmosphere—had just occurred. It is a region where the magnetic field is particularly strong and complex.

A solar flare often precedes a much more powerful event. The same magnetic field that generated the flare twists beneath the sun’s surface, drags huge amounts of solar plasma out of the sun and, like a cannon, hurls it at high speed into space. This is called a coronal mass ejection.

Unlike the radiation from a flare, which reaches the Earth at the speed of light in about eight minutes, coronal mass ejections are composed of charged particles that move more slowly. It can take from a few hours to several days for them to reach the Earth’s orbit.

Several moderately intense flares have continued to occur over the past week. On July 15, one of them was accompanied by a spectacular ejection. This time, however, it is heading towards Earth, and we expect it to hit us on July 21.

It is not the first time that we have been in this situation. Although the physics of these phenomena are not yet fully understood, we are certain that they are mainly magnetic in nature. And that their occurrence is not fortuitous: approximately every 11 years, our sun experiences periods of high magnetic activity, called solar maxima.

During these maxima, the frequency of these events is especially high. And right now, we are entering the maximum of the current cycle, which is expected to peak in 2024.

The extent of a coronal mass ejection is usually accompanied by striking polar auroras. However, the most global effects occur when it interacts with the Earth’s magnetosphere: a kind of protective bubble that envelops the Earth. The strength of the Earth’s magnetic field is able to deflect charged particles released by the sun (the solar wind). The magnetosphere allows—among other things—the Earth to retain its atmosphere.

Upon contact with an ejection, the magnetosphere is compressed. The rapid variations of the Earth’s magnetic field produce electric currents wherever there are free electric charges (such as in the ionosphere, one of the layers of our atmosphere). This then generates more complex magnetic fields that add to the Earth’s own magnetic field.

This chaotic disturbance of the magnetic field is called a geomagnetic storm. It can, in turn, disrupt radio and satellite communications. In the most extreme cases, it can cause power outages.

At the moment, the various space weather observation and forecasting services (such as NOAA, Space Weather or SOHO) have published a G1 alert, which corresponds to minor geomagnetic storms, with possible minor fluctuations in the power grid and little impact on satellite operations.

We shouldn’t worry, should we?

The truth is that this may not be the case. In September 1859, a geomagnetic storm from a coronal mass ejection caused the failure of telegraph networks in Europe and North America. It was called the Carrington event, after the astronomer who observed the flare, Richard Carrington.

The electrical currents induced in the telegraph cables were so strong that they caused fires in the receivers. Some telegraph operators were electrocuted.

At the time we were saved by our limited dependence on electronic systems. Today we would not be so lucky: our hyper-technified society has blind faith in the resilience of the communication networks that our mobile phones and computers depend on.

So far, the various state attempts to deal with such threats have been timid, unco-ordinated and based on generalities. Our situation right now is one of clear vulnerability. And while the frequency of these phenomena is not expected to stop increasing in the coming years, it still seems too alien a problem.

The question now is, will we have time to change our minds before the next Carrington event?

Gonzalo José Carracedo Carballal carries out his research at the Centro de Astrobiología with funds from an INTA predoctoral fellowship.

David Montes receives funding from the Ministry of Science and Research and the Complutense University of Madrid (UCM).