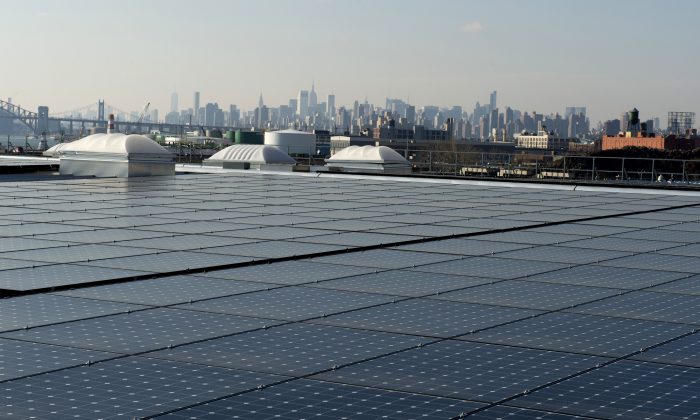 Solar panels on the rooftop in the Bronx, with a view of Manhattan in the distance, on January 17, 2014 in New York. (Don Emmert/AFP/Getty Images)
Companies

Amazon.com Inc. is powering back on solar rooftops at all North American facilities after doing fire safety overhauls.

“As inspections are completed, our onsite solar systems are being powered back on. Amazon also built a team of dedicated solar experts overseeing the construction, operations, and maintenance of our systems in-house to ensure the safety of our systems,” an Amazon spokesperson told The Epoch Times in a statement.

The online retail giant halted the operation of solar rooftops at all North American facilities in 2021 after several fire incidents were reported.

“Out of an abundance of caution, following a small number of isolated incidents with onsite solar systems owned and operated by third parties, Amazon proactively powered off our onsite solar installations in North America, and took immediate steps to re-inspect each installation by a leading solar technical expert firm,” an Amazon spokesperson said in a statement.

The company said it’s still committed to powering its operations with 100 percent renewable energy by 2025.

“We have reached 85 percent renewable energy across our business,” the spokesperson told The Epoch Times.

An employee of the e-commerce giant said in one internal report that the rate of dangerous incidents is “unacceptable, and above industry averages.”

It’s unclear who is the manufacturer and service provider of the solar systems at Amazon facilities.

The retail giant sued Tesla Energy Operation, Inc.—which was known as Solarcity Corporation before it was acquired by Tesla—in August 2019 after fires were reported at the solar rooftops at three Walmart facilities in Ohio, Maryland, and California.

“The stores all had Tesla solar panels installed by Tesla on their roofs. At each location, the fire had originated in the Tesla solar panels,” Walmart claimed in a civil lawsuit filed at New York Supreme Court.

The two sides settled the lawsuit three months after the lawsuit was filed and said they were working together to solve the issues.

“Walmart and Tesla are pleased to have resolved the issues raised by Walmart concerning the Tesla solar installations at Walmart stores. Safety is a top priority for each company and with the concerns being addressed, we both look forward to a safe re-energization of our sustainable energy systems,” Walmart and Tesla said in a joint statement.

“These problems can cause arcs between conductors or to the ground, as well as hot spots, which can ignite nearby flammable material,” says the Solar Energy Technologies Office of the agency in a consumer’s guide to fire safety with solar systems.